History of the Mayway Building

Many of our local customers come to Mayway here in in West Oakland to pick up their orders and are curious about the building's distinct architecture and history. We find it pretty fascinating ourselves, and thought you would enjoy this tiny bit of Oakland history. 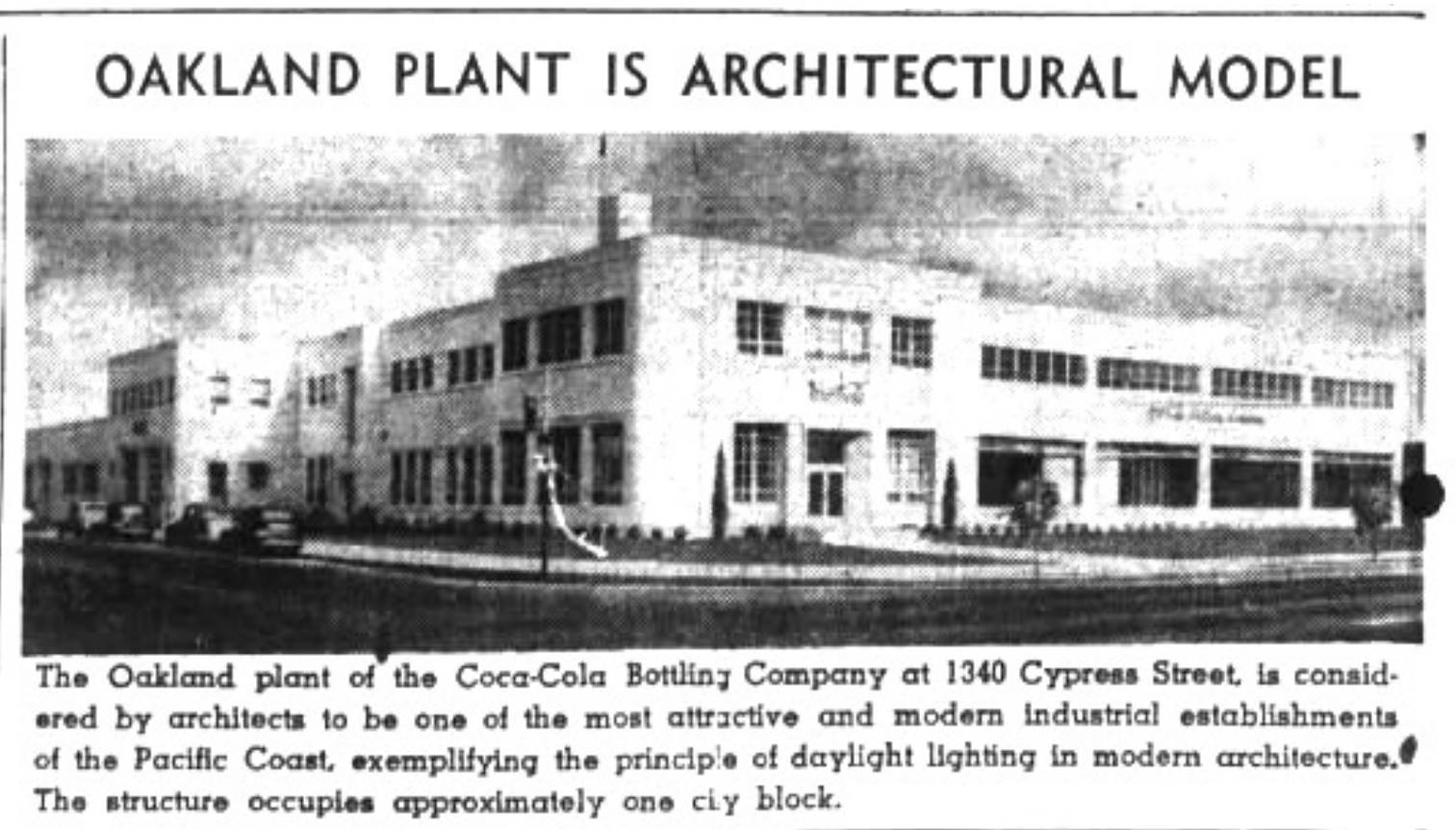 Our building was designed by architects Jesse M. Shelton and E. T. Foulkes, constructed between 1939 and 1940 for the Coca-Cola Company, and was considered a modern architectural model for the time. It is a striking example of Streamline Moderne, an architectural style that emerged in the 1930s favoring sleek horizontal lines and rounded corners. Another common feature was porthole windows, which can be seen on the 14 th St. side. This style was a reaction to the more luxurious and decorative look of Art Deco, which was emphasized with austere materials, flat surfaces and muted color schemes. The large windows and numerous glass skylights were designed to reduce the need for electric lights, a feature that Mayway, as a green business, is grateful for today. 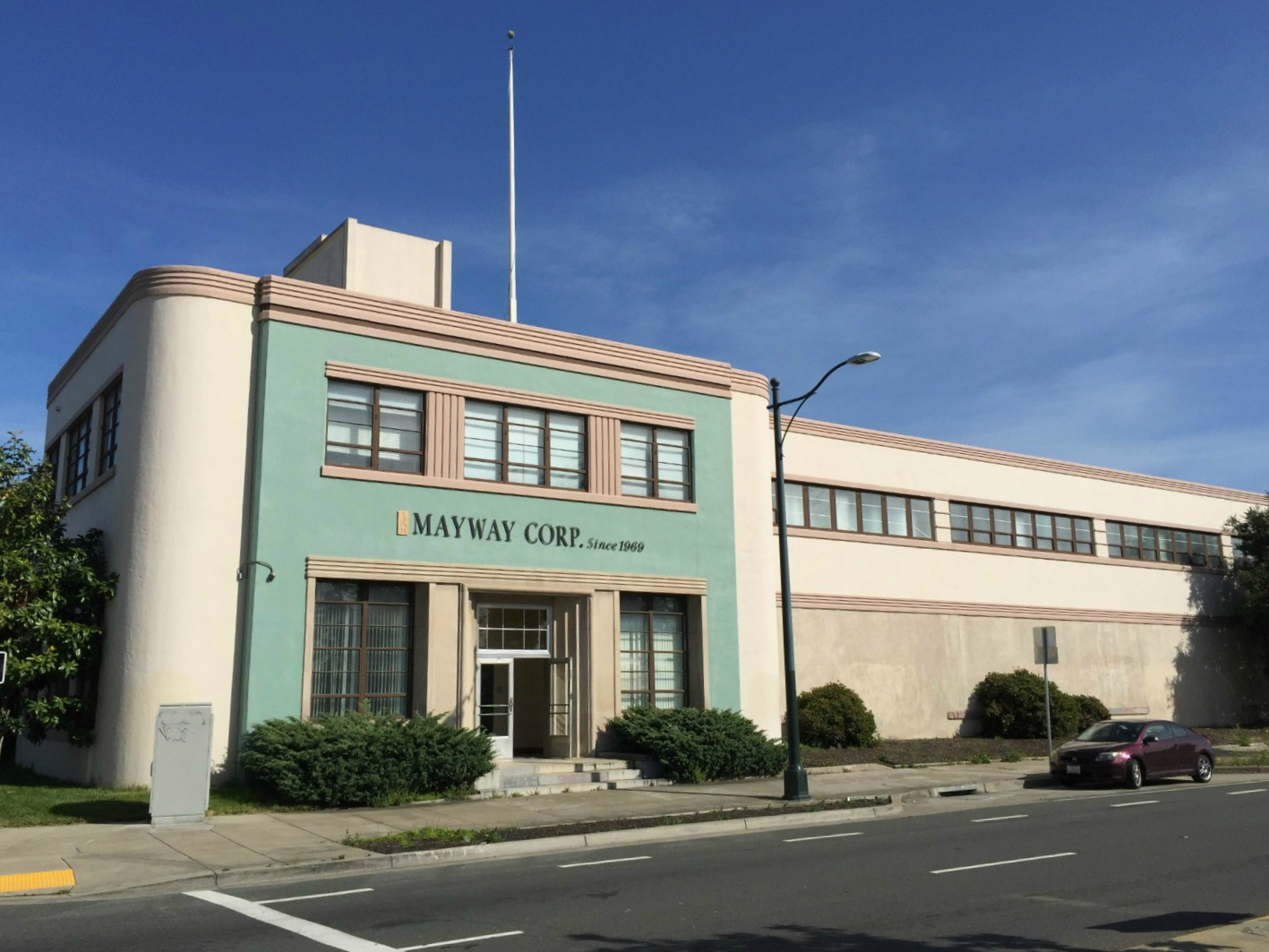 West Oakland was the western terminus of the Trans Continental Railway and an ideal location for industry. The classic Nabisco Shredded Wheat factory, built in 1915 and still in operation under the ownership of California Cereal Products, sits right next to the train tracks a block behind us. Across the street on 14 th was the Carnation Milk factory, built in 1928 and still standing when we moved in in 1992, but closed a year later and demolished in 2012. And in 1940 Coca-Cola moved in at the corner of Cypress and 14 th Streets.

Originally passers-by could see freshly-capped bottles of Coke come off the line through large horizontal windows along the Cypress St. side of the building (now Mandela Parkway). The observation windows were later cemented over, likely after the completion of a new double-decked freeway structure in 1957, which ran along Cypress St. in front of the building. However, the building retains much of its original design, including wood paneling and clearstory windows in the executive offices, riveted steel girders in the warehouse and an original freight elevator with deco control panel faithfully maintained and used daily. A walk-in safe, which can be seen in our foyer, was connected to teller windows on the second floor (since removed). Drivers would drop off cash payments from their delivery rounds which would be deposited directly via chute system into the safe downstairs. 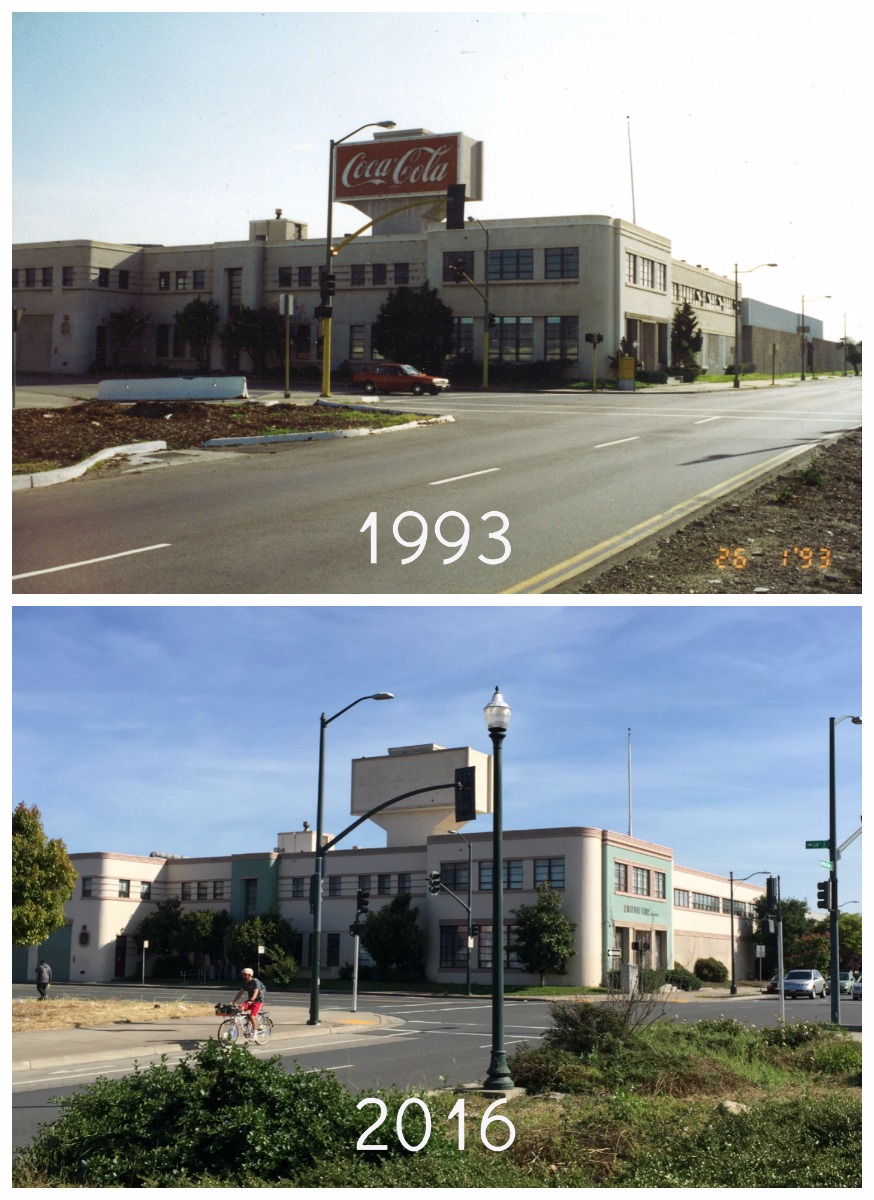 After nearly 50 years of operation, something unexpected happened at the Coca-Cola factory. In 1989 the Loma Prieta earthquake collapsed the Cypress Freeway structure right in front of the building. Workers grabbed ladders and rushed out to help as they could during this tragic event that killed 42 people. The solid construction of the building left it mostly unharmed, but the neighborhood was filled with rubble and bad memories, and Coca-Cola shut down this location shortly after the earthquake and put the building on the market.

In 1992, it was purchased by the Lau family, owners of Mayway, with remnants of the freeway collapse virtually on the doorstep. It would take more than 15 years before the street was cleared and reconstructed as Mandela Parkway (renamed after South African civil rights leader Nelson Mandela), breathing new life into the neighborhood with a grassy median and small park directly across from Mayway.

Within the building, over the past two decades, we have both adapted to it and adapted it for our operations, retaining many original features. However, antique Chinese furniture and art juxtaposed with a white clean room level Dispensary also make it entirely our own. We are proud of our building and its storied past and offer tours to groups by appointment. Please contact us at info@mayway.com to schedule a tour.