The Ancient Art of Cupping 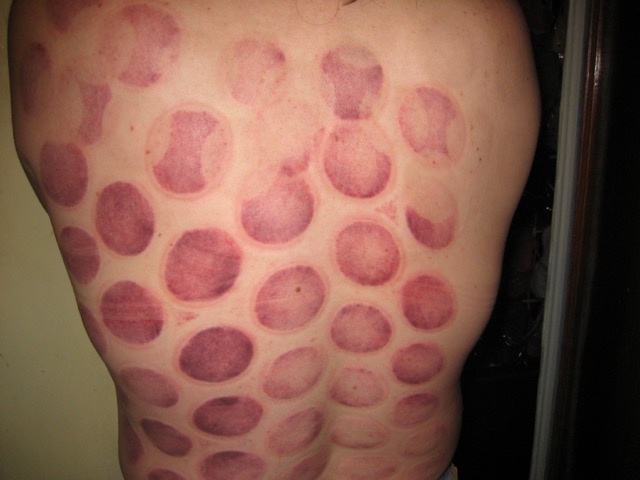 The ancient art of cupping has been utilized by healers and lay people in many cultures around the world. Cupping is a suction technique designed to pull toxin build up and muscle spasm from the body’s deeper tissue to the surface of the skin. The cells of the body use oxygen and give off carbon dioxide; when the energy is blocked, the cell waste or carbon dioxide gets blocked. This is called acid or toxin build up. Physical pain implies a blockage in the flow of energy through a particular area. The body may have difficulty getting rid of waste when toxins or cell waste stagnate in the muscles or joints. By utilizing cupping techniques we are able to pull the blockage out of deep tissue and move it to the skin’s surface. Once on the surface, it is much easier for the body to eliminate these toxins through the superficial blood supply or capillary system. In ten minutes of cupping, we can pull toxin build up out of specific areas, and we can also vitalize and restore proper blood flow.

Cupping is diagnostic as well as therapeutic, and tells three essential things. First, cupping tells us exactly where the problem is, as we usually cup an area slightly larger than the painful area in order to ensure that the area of pain is completely covered. Some skin under the cups will color and some won’t, though the same amount of suction is used with all cups. Even part of the skin under a single cup may color while the rest does not. Second, cupping will tell us the kind of problem with which we are dealing, as problems relating to toxin build up or muscle spasm will cause the skin under a cup to color, whereas nerve or bone issues will not color. Third, cupping will tell us the severity of the problem. Light or moderate blockage will cause the skin under a cup to color pink or red; the color will take a day or two to dissipate. Severe stagnation can cause the skin to color a deep scarlet, purple, or even black, and may take seven to ten days to disperse. This information is helpful not only in treating the patient, but in making an accurate diagnosis.

The cupping sensation can be painful for the first sixty seconds, during which most of the toxins are removed. It is helpful for the patient to try to relax while being cupped, and to acknowledge and tolerate the pain. Practitioners should ensure that the patient does not hyperventilate by closely watching the patient’s breathing and encouraging them to inhale and exhale through the nose. This will slow the breathing and insure that the patient does not get dizzy or lightheaded. The discomfort usually eases after sixty seconds. Patients who receive cups while lying down may even doze a bit.

Cups should never be applied for more than ten minutes. If color does not appear after a few minutes, cups can be removed and placed elsewhere on the body. Do not leave the treatment room while cupping your patients. Be sure to watch your patients closely; if blisters begin to appear, the cups should be removed immediately–blisters indicate that a cup has been left on too long. The practitioner’s gentle downward stroking of the arms or back can help patients to relax and feel the practitioner’s presence during the treatment. Some patients will need you to work especially slowly and gently while cupping them.

In cases of pneumonia or asthma small cups maybe used on children, even infants, to break up serious phlegm congestion in the lungs. Young children will generally tolerate four to six small cups at a time, as long as they are safe and secure in a parent’s arms. Older children who have experienced cupping will often ask for cups when they know that they need this kind of treatment.

In the “selfie,” taken by a patient after her second round of back cupping, it is easy to see how the toxins, once removed, remain absent from the body, while the gaps between the cupping marks still hold blockage. Notice how the circle and moon shapes from cupping done during the first treatment are free of color. During the second round we cupped the gaps on the upper back, along with the patient’s mid and lower back. The mid and lower back color indicates a lot of blockage, and tells us that we will need to revisit the gaps left between those cup marks. The cup lips that are touching each other create gaps, as the skin beneath them cannot be relieved of toxins.

We cup someone as long as they continue to color. The first round of cupping will usually remove 80% of the blockage; the residual 20% will be removed during the second round. If this clearing takes place in the second round, with color found only in the gaps, we can wait a few months before rechecking. People who work with or ingest chemicals may need more cupping. I keep my patients free of toxin build up by cupping them quarterly or annually as needed.

As cupping manually removes toxin buildup in ways that needles cannot, the overall healing process may be shortened by weeks, even months using this extraordinary technique.

Bio: Susan Johnson has been studying acupuncture since 1982. A graduate of the American College of Traditional Chinese Medicine, Susan practiced in San Francisco from 1983-88, specializing in the treatment of HIV. She studied Master Tung’s Magic Points with Dr. Miriam Lee and Dr. Young Wei Chieh, Ph.D. for more than 12 years and has used them nearly exclusively in her practice for thirty years. Dr. Tung’s system, which utilizes meridian points in new ways and also includes extra points, can provide perfect keys to the treatment of particularly challenging conditions, in addition to a wide range of common ailments. Dr. Tung’s Points are immediately useful and instantly effective in most cases. Susan maintains a private practice in Santa Cruz, California. She is a dynamic teacher renowned for her clear presentation of this style of acupuncture.