The Suffering of Bears Part II:

The Suffering of Bears Part II:
Promoting the Humane Alternatives to Bile

Known as the moon bear because of the beautiful yellow crescent on its chest, the Asiatic Black Bear is perhaps the most ill-treated creature in the world. Listed in the highest category of endangered species, this gentle, inquisitive bear is exploited across Asia for entertainment, food, trophies and medicine.

One of the key factors in their rapidly diminishing population is the demand for their gall bladders and bile juice, which is used predominantly as a ''heat reducing'' component in traditional medicine across Asia. In the early 1980's China adopted a practice developed in North Korea where bears were taken as cubs from the wild, caged and surgically implanted with metal catheters so that bile could be extracted on a regular basis while keeping the animal alive. By the early 1990's there were nearly 500 mainland farms holding more than 10,000 bears.

It was in 1993 that I first walked on to a bear farm and was horrified by what I saw- and even more horrified to learn that China had plans to expand the numbers of farmed bears to 40,000 by the year 2000. Knowing little about the practice, my first approach was to research the usage of bear bile in the Chinese pharmacopoeia, working with traditional medicine doctors, and discovering along the way that whilst bear bile held a 4000 year history of usage, it could easily and cheaply be replaced by herbs and synthetics.

This information and the knowledge that people weren't dying for the lack of bear bile opened the doors for direct negotiations with the Chinese Government which eventually resulted in our first agreement to reduce the number of farmed bears by 30%.

In 1999 the team of Animals Asia was invited on a field trip by the Government Departments of the China Wildlife Conservation Association and the Sichuan Forestry Department to investigate 11 bear farms in and around Chengdu. Shown the "best" and the "worst" which China had to offer, this was the opportunity we had been waiting for, because it allowed us to show the Government how so-called "humane" practices were anything but!

This investigation and the officials' obvious disgust with the conditions they had witnessed was the turning point in our campaign. In July 2000 Animals Asia signed a pact with authorities in Beijing and Sichuan province that promised to rescue 500 bears from the worst farms and to co-operate to end bear farming. The China Bear Rescue was born. This project was seen as a wake-up call for protecting the Moon Bear before it is too late and for promoting animal-free medicine. Today, Animals Asia is the guardian of 85 rescued moon bears in China. 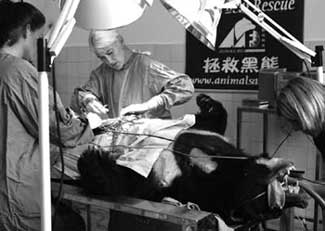 As the rescue continues, sadly, bear farming remains big business. Although the practice was introduced to "save" bears in the wild, bear farming has created a host of new problems for wild bears as the stimulated demand sees them poached for their whole gall bladders by illegal hunters, and also often illegally trapped as new stock for the farms.

In Vietnam, the situation for moon bears is out of control. With what is thought to be less than 100 surviving in the wild, the number of bear farms has exploded from a few hundred in 1999 to as many as 5,000 today. South Korea banned bear farming in 1992, but 1,400 bears remain on defunct farms.

Conditions on farms are unbelievably cruel. In China, moon bears are confined for up to 22 years in cages the size of their own bodies and milked daily for their bile through rusting catheters implanted deep into their gall bladders. A new technique called ''free dripping'', uses no implant but also sees a high mortality rate due to bile leakage, widespread infection and peritonitis.

Our belief is simple. By helping the individual bears, we can work towards our higher goal of helping them all as a species. When new bears arrive by the truck-load at our rescue centre in Chengdu, Sichuan province, it is a harrowing time for all. Still in their tiny wire cages, they present the grim reality of bear farming as we see vicious scars from where they have literally grown into the bars, missing limbs from being trapped in the wild, teeth and claws deliberately cut back to take away their defences, and gaping infected holes in their abdomens.

Understandably, they are demented with fear and frighteningly aggressive as they crash their bodies against the sides of the cages and exhibit stereotypic behaviour as a result of being ''cage crazy''.

Yet within weeks their transformation is remarkable. Our surgical team, led by Hong Kong veterinarian Gail Cochrane, prepares them for surgery which can last up to eight hours, followed by months of physiotherapy and integration.

Today, the disabled bears that had lost one and even two limbs in leghold traps, jockey for position at feeding times, skilfully maneuvering neighbours out of the way in their greed for a taste of their favorite treat- honey- while the able-bodied bears are running on grass and tussling together in bouts which would put world-class wrestlers to shame.

Our additional construction of a semi-natural sanctuary now has two large zones and dens complete. Of the 85 bears we have on site, nearly 40 are enjoying a natural life today in a beautiful bamboo forest. Many of the remaining 45 bears at our Rescue Centre are disabled and require a special zone which safely caters to their every need. In addition, our development of an Education Village is as an important construction as the sanctuary itself, for it creates a whole new stage where adults and children alike will understand the concept of animal welfare and why it is so important to appreciate a species such as the bear for its own sake, rather than how it can benefit humankind.

From the second people arrive, they will be on an educational roller coaster where they will be guided never to wear fur, or buy ivory, or take medicines made from endangered species. Where children will understand environmental protection and respect better than we ever did, and where they will take the lead in promoting the rights of animals in China.

Just as importantly, the Education Centre will be a base where workshops on traditional medicine can be held. Where we will highlight the herbal and synthetic alternatives to bear bile and explain how far more synthetic bile is consumed in Asia than bear bile; showing that Japan, Korea and China between them consume 100 tons of synthetic bile annually. This is our great opportunity to expand our work with doctors, pharmacists, herbalists and all in the traditional medicine community and share with the public how synthesised UDCA (using cow or pig bile - and even no animal parts) is a safe medicine with no side effects. Here we can expand our currently successful "Cruelty Doesn't Cure" Campaign in Hong Kong which already has seen thousands of traditional medicine practitioners signing a pledge which immediately removes any endangered animal part or product from their shelves and which works towards replacing ALL animal parts with herbs and synthetics.

Meanwhile, whilst the rescue is progressing well and we are seeing much encouragement and help from our Government partners, there are still significant concerns regarding the attitude of the Central Government. Although they apparently endorse and support this rescue, and have issued no more bear farm licences, the absence of an "official" government policy nationwide is frustrating and confusing. So, whilst smaller farms are closing down, some of the larger farms are expanding the number of bears and our greatest fear lies with those Government officials who wish bear farming to continue.

However, we are reassured by the words of Beijing official, CWCA Secretary General Chen Run Shen, who spoke to the world's media at a press conference in Chengdu in December 2002: "On behalf of the Chinese Central Government we will continue to support the work of the Animals Asia Foundation and together with AAF, we will achieve our final objective of terminating bear farming in China."

The Animals Asia team remains focused on our goal of continuing the rescue and ending this unnecessary and unconscionable practice by the 2008 Beijing Olympics.

Jill Robinson, MBE, is the founder and Chief Executive Officer of Hong Kong-based Animals Asia Foundation. More info and contact info may be found at www.animalsasia.com. Special thanks to Animals Asia Foundation for their photographs, article and hard work for the benefit of our fellow sentient beings. Mayway does not carry any product containing bear bile or bear products.