Most of China’s prime herb growing regions have been affected by a once in a century drought over the last two years. Drought during the 2008/2009 season severely impacted herbs grown in Gansu, Shaanxi, Shanxi, Henan, Anhui, Shandong and Hebei. During the 2009/2010 season the severe drought spread south to the growing regions of Sichuan, Yunnan, Guizhou, Chongqing and Guangxi. While rain has started to fall in parts of Guangxi, and Shichuan, the spring plantings have already been greatly affected. Drought, earthquakes and inflation have already caused herb prices to rise in the recent past. In addition, it is highly likely that China will unpeg its currency from the dollar allowing for a gradual appreciation of its currency. Economists have recently said that China’s currency is 10-50% undervalued. With this combination of environmental and economic pressures, the price of herbs will likely continue to rise and the availability of some herbs may become limited. 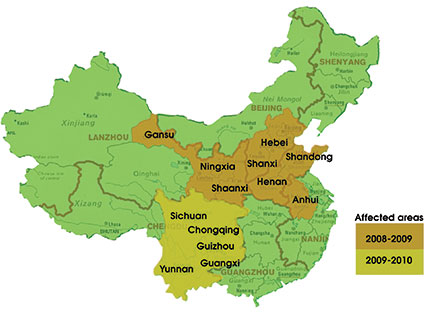 Anhui
In 2009 Anhui Province issued a red drought alert, with more than 60 percent of the crops north of the Huaihe River plagued by a major drought.

Gansu
At one point nearly 80% of this region’s farmland was severely impacted by drought.

Hebei
Hebei, like many drought affected regions was forced to channel over 100 million cubic meters of water from outside its borders to fight the drought.

Henan
Henan issued some of the highest level drought warnings in China. At points it was reporting almost 80 percent less rainfall than in the same period in previous years. The drought here was the most severe experienced since 1951.

Shandong
At the worst point of the drought, Shandong was experiencing 73 percent less rain than during the same period in previous years.

Guangxi
While rain has started to fall in this regions, many farmers have already lost significant income.

SichuanM
Rain has just begun fall in some areas, bringing some relief after the worst drought in a century.

Yunnan
Yunnan is experiencing its worst drought in 60 years causing economic losses in excess of 10 billion yuan (1.46 billion US dollars). While rain has started to fall elsewhere, Yunnan continues to be severely affected by drought.