The Suffering on Bear Bile Farms

The Suffering on Bear Bile Farms 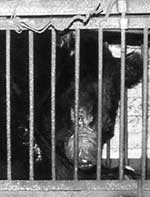 There has long been debate over the use of animal parts in Chinese medicine. While it was not an issue for ancient practitioners, changing views on the rights and welfare of animals have raised concerns over the morality of using certain animal parts, especially in the West. Besides the use of tiger bone*, another controversial animal part used in TCM is bear bile.

First recorded in the Tang Ben Cao and then described in detail in the Ben Cao Gang Mu for heart, liver, and gall conditions, bear bile has been used since ancient times. Until the mid 1970s, bears were captured from the wild and killed for the bile in their gallbladders and for their paws, which are considered a delicacy. The rest of the animal was discarded.

In the mid 70s, a Chinese delegation visited North Korea where they discovered that the Koreans had established bear farms to extract bile without killing the animal. The bile from one bear in a farm yielded almost 2 kilos of bile per year, the equivalent harvested from killing 100. China thus embraced bear farming, and the official government figure is currently 247 farms containing 7002 bears. They are mostly situated in Sichuan and Yunnan provinces with additional farms in Jilin, Heilongjiang and Guangdong. While many are captive bred, many of the bears kept on these farms are captured from the wild, irrespective of species.

Trade and farming of China's brown bears and Asiatic bears are restricted according to China's wildlife regulations. While it is illegal to farm brown and sun bears, Asiatic bears are allowed to be farmed for internal trade only. Brown and Asiatic black bears are classified as a CITES Appendix II (Convention on International Trade in Endangered Species), and legal for trade with a permit.

Although many species of bear are captured, only Asiatic black bears are legal for internal trade, so there is much false identification of bear species. In China, Asiatic black bears are considered a 2nd level protected species, which means the animals are under provisional supervision and protection only. This allows for trade of bear bile from government-sanctioned farms but bans sale of other bear parts.

Officially, there are 247 registered bear farms in China. However, as the regions where most of the bear farming takes place are impoverished, poaching and illegal bear farming is widespread. Since bear farming can be significant parts of local economies, protection laws are only loosely enforced.

In the past, a number of government-sanctioned farms have been opened to international public scrutiny. Although these farms have demonstrated that, according to their government, their bears are kept under relatively humane conditions, evidence is showing much to the contrary. The overwhelming majority of farms are hidden away in older factory buildings in industrial centers with much worse conditions.

According to the Animals Asia Foundation who provided us with these disturbing photographs, the bears are kept in tiny cages where they are barely able to move. Sanitation is poor, and the animals suffer from malnutrition and disease. Mortality from infection and disease is high, which supports the continued capturing of bears from the wild. Their bellies are shaved, and catheter-like tubes are surgically implanted into their gall bladders - others are victims of the free-dripping method which is even more cruel. Twice a day each bear is "milked" of their bile.

The legal requirement for captive bred bears is that they must be over three years old and weigh over 100 kgs. However, Animals Asia Foundation reports that many bears (particularly females) are arriving at their rescue center weighing less than 70 kgs.

As time goes on, the amount of bile produced by a bear decreases until it is no longer profitable for farms to keep the bear. At that point the bear is slaughtered and its paws removed for sale. According to the Humane Society of the U.S., the parts from a single bear are worth about US$10,000. The gall bladder can sell for $3400, and the paws for $1400 each. With the price of a single bear cub between US$280-$400, and one gram of dried bile powder fetching close to US$30 in Japan, the lucrative trade of bear bile and parts has lead to over-production.

According to an official at the China Science Institute, who would only speak on condition of anonymity, at this time China produces approximately 6000 kilograms of bear bile per year, but its demand by the traditional Chinese medicine industry is only about 500 kilograms per year. As bear farming is such an important part of local economies in certain regions, China is blindly supporting research on other medicinal uses of bear bile. This has resulted in the development and marketing of bear bile wine, beverages, and even shampoo.

Mayway supports the preservation of endangered species and the humane treatment of animals. We discontinued the sale of any products containing tiger bone or bear bile, and in formulas requiring bile, have chosen to use pig bile, which is harvested only when the animal is slaughtered for consumption. We sincerely hope this inhumane treatment and slaughtering of bears will stop. This requires the education of manufacturers, consumers and practitioners as well as finding other avenues of economic support for regional economies. Please do what you can to support these efforts.

Special thanks to Jill Robinson, MBE, for help with this article and for providing photographs. She is the founder and CEO of Hong Kong-based Animals Asia Foundation working to rescue bears from farms in China.