Eleuthero, formerly known as “Siberian Ginseng,” is native to North Eastern China, Eastern Russia, Korea, and Japan. While it is a member of the ginseng family Araliaceae, it is not a “true” ginseng of the Panax genus, such as American Ginseng/Panax quinquefolium or Ren Shen/Panax ginseng. The current authoritative botanical literature refers to it as: Eleutherococcus senticosus and Acanthopanax senticosus. 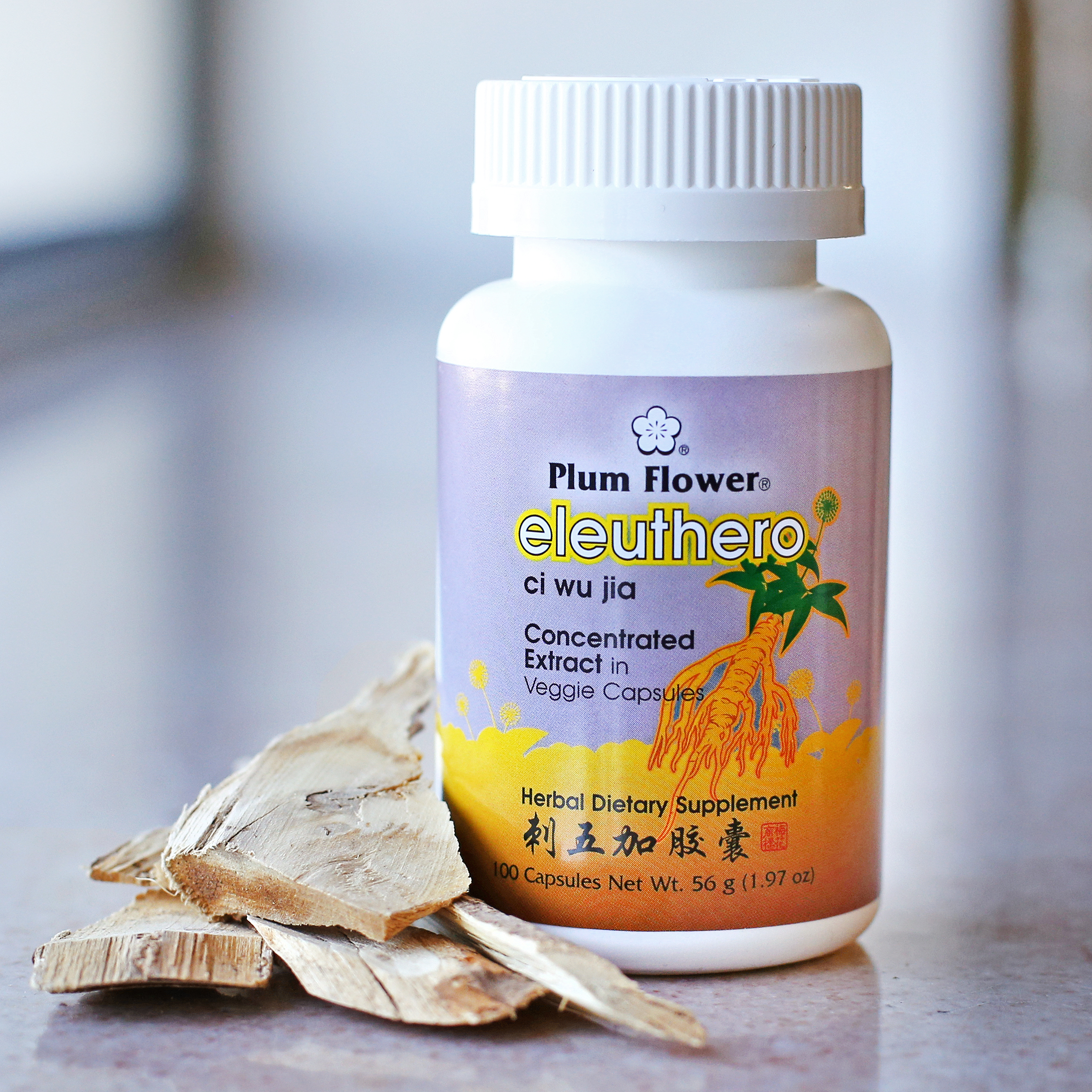 The popularity of Ci wu jia, outside of traditional Chinese medicine circles, originates from the work of Russian pharmacologist Israel Itsokovich Brekhman (1921–1994), who gained international renown for his pioneering work in identifying and isolating the most valuable characteristics of adaptogenic plants. In the 1940's, Dr. Brekhman studied Korean ginseng and determined that it increases vitality and enhances resistance to illness in humans. Over the next 30 years, Ci wu jia was the focus of numerous studies highlighting its health benefits and reported adaptogenic properties.

Ci wu jia is a small shrub that grows in thickets along the borders of both broadleaved and evergreen forests in China and Russia. Due to its increased popularity over the last 40 years, its availability in the wild has dwindled precipitously. Currently, the vast majority of commercially available Ci wu jia is now grown through cultivation. Successful propagation techniques have evolved over time, including propagation via seeds, cuttings, suckers, and micropropagation. Recent success in micropropagation techniques have increased the rate of plant propagation by 76-97%, which is significantly higher than through sprouted seeds.

Ci wu jia roots are normally harvested in the fall or early spring. Research in Russia and Japan during the early 1990's has shown that many of the major chemical components with medicinal value are also found in the stems, bark and leaves of the plant. This discovery has increased overall output of medicinally valuable product per acre.

First identified in the Divine Husbandman's Classic of the Materia Medica, Ci wu jia is classified as a Qi tonic. Its nature is spicy, slightly bitter, and warm, entering the Spleen, Heart and Kidney meridians. Ci wu jia's traditional Chinese medicine functions include:

The traditional functions of Ci Wu Jia may appear slightly vague in comparison to more commonly used Qi tonics found in traditional Materia Medicas, and its inclusion in herbal formulas is somewhat rare. Because of this, our understanding of the herb's qualities and medicinal uses have originated more from modern research than from the traditional accumulation of clinical experience.

Classified in the genus Acanthopanacis in the Chinese Pharmacopoeia, it also has similar properties to Wu jia pi, Acanthopanax gracilistylus, which is found in the category of herbs that dispel Wind-Damp and is also considered to have adaptogenic properties. Having used both Ci wu jia and Wu jia pi extensively, I think the comparison is an apt one. Both are often used alone as restorative tonics.

Comparisons of Ren shen and Ci wu jia are also justified, though they certainly should not be considered interchangeable. Ren shen is a more powerful Qi tonic, tonifying the Qi of the Spleen, Lung and Heart as well as the primal Qi of the Kidneys. By comparison, Ci wu jia has a lighter nature and primarily tonifies the Spleen and Heart Qi. The moderate nature of Ci wu jia's Qi tonification effects make it far more suitable for single herb use, and it can be taken safely over the long term without concern for stagnation of the middle Jiao. The unique properties of Ci wu jia make it especially attractive as a single-use herb, with its harmonizing effects that enhance recovery from over exertion.

Ci wu jia is an effective and convenient herbal supplement in the busy clinical setting. It is ideal for the active patient needing sustained, gentle Qi tonification, enhanced circulation and a calmer Shen. It is an ideal choice for those who participate in intermittent strenuous activity, those who work long hours at the office, or those recovering from prolonged illness. With the proper pattern differentiation, Ci wu jia can provide solid Qi tonification, while also enhancing circulation and calming the Shen.