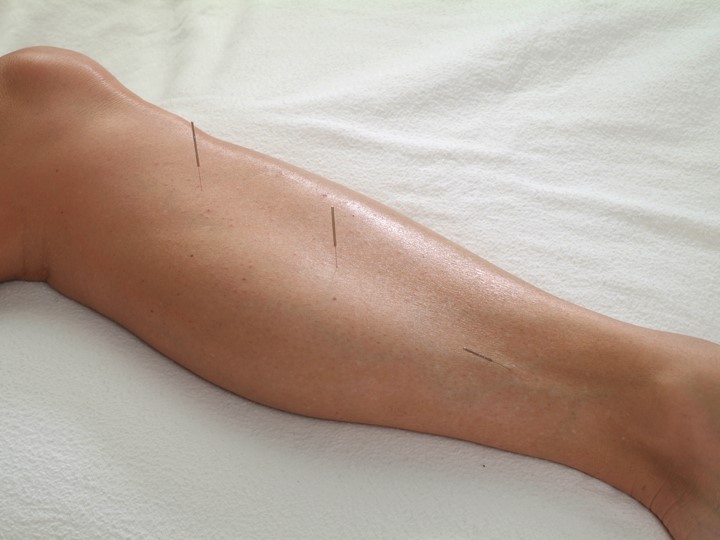 Because it is located on the Spleen meridian, Shen Guan utilizes the I Ching connection between Foot Tai Yin (Spleen) and Hand Tai Yang (Small Intestine). This is the influence behind its use for Small Intestine channel patterns, including trigeminal neuralgia and shoulder/arm pain. Shen Guan is also very effective for frozen shoulder and shoulder pain with inability to raise the arms upward, because of the Hand and Foot Tai Yin pathway shared between the Lung and Spleen and effecting the front of the shoulder (Lung). In cases of frozen shoulder, we use Shen Guan on the opposite side.

77.18 Shen Guan, 77.19 Dihuang, and 77.21 Renhuang (SP 6) are often used in combination, and collectively are known as the Three Emperors. The Emperor points are located on the Spleen channel, and are all very powerful Kidney points. Because of In the Clinic their access to these two organs, they work well for four major body systems: urinary, reproductive, gynecological, and digestive. Three Emperors have a gynecological, sexual and neurological function since these are related to the Kidney. They also treat deficiency of both postnatal Qi (Spleen) and prenatal Qi (Kidney). They are particularly effective for Urinary Bladder disease, digestive problems, kidney failure, diabetes, gynecological disorders and male disorders such as impotence and prostate enlargement.

When compared with the Kidney Passing points (88.09, 88.10, and 88.11), Three Emperors function more for gynecological, sexual, and neurological disorders, and are more effective for impotence, premature ejaculation, diabetes, and proteinuria.

Premature ejaculation indicates that the Kidney gate is not consolidated. Shen Guan treats this imbalance by astringing Kidney Jing. For impotence, you can use Three Emperors with LV 1. The Liver meridian goes around the genitals. The Liver stores blood and governs tendons, which determine softness and hardness. LV 1 is the wood point on a wood meridian, and is the jing-well point of the Liver channel; it opens the orifices, and the penis is an orifice.

For kidney failure, use Three Emperors with 66.15 Shui Xiang (Dr. Tung’s KD 3, closer to the tendon than KD 3) and 88.13 Tian Huang (Heavenly Yellow), which is a water point on an earth channel. Alternate these two points, never using more than eight needles at once. Also for kidney failure, fill the navel with salt, and add a thin piece of ginger (cut on a diagonal and poked many times with a fork), and burn moxa on top until the salt melts. When people’s kidneys are failing, they are not able to urinate. This treatment is very good for producing urination.

For diabetes, tonify the Spleen and Kidney by using SP 9 Yinlingquan, the water point on an earth channel, along with Shen Guan; or, use Three Emperors with LI 5 Yang Xi, a fire point that disperses heat. To regulate Qi, use 66.14 Shui Xiang (KD 3), the earth point on a water channel, along with TW 4. Use LV 3 to soothe the Liver. Because there is too much earth in the water, it’s necessary to plant a tree to hold the earth.

Susan Johnson, L.Ac., has been studying and practicing acupuncture since 1982, and is an esteemed teacher of Master Tung’s Magic Points, a potent system of acupuncture handed down as a treasured family secret for generations and made public by Master Tung Ching Chang. Susan graduated from The American College of Traditional Chinese Medicine in San Francisco, California, in 1984. By then, she’d begun an internship with Dr. Miriam Lee, OMD, whose influence was life changing for Susan. Susan became Dr. Lee’s primary student and trained extensively with her for twelve years. Together they traveled to Hefei, China, to study bleeding techniques with Dr. Wang Xiu Zhen. Susan studied Tung’s Acupuncture with both Dr. Lee and Dr. Wei Chieh Young.