The Chinese Medicine Treatment of Anxiety

Reprinted from Clinical Handbook of Internal Medicine (2nd Ed.) by William Maclean with permission of Eastland Press. Buy the book 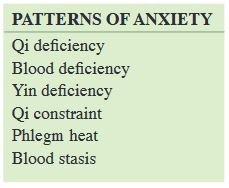 Anxiety is a normal human emotion. Most people will experience it from time to time as a normal response to the stresses and worries of life. Anxiety becomes a pathological disorder (jiāo lǜ zhèng 焦虑症) when it repeatedly interferes with daily life, is irrational, excessively prolonged or out of proportion with the cause (See box). In Chinese medicine, anxiety is most frequently associated with disorder of the Heart and shén , and to a lesser extent the Liver and Kidneys. The shén and hún are agitated by heat and constraint, or ungrounded and destabilized by Heart qi, yin or blood deficiency.

In the Chinese medical model, emotional turmoil of some type is at least partly responsible for all types of anxiety, the exception being anxiety following blood loss. Some people will report a specific history, which may be profound or ongoing. If the triggering situation has ceased, the affected individuals coping and recovery mechanisms may be compromised by a constitutional or acquired weakness. Others deny trauma or stress, and appear to be in supportive family and work situations. In such patients, an emotional or physical trauma is assumed, but may have occurred some time before, become lost in the general run of life or was seemingly trivial and brushed off at the time. At some point, the combination of constitutional predisposition, and other non-emotional contributing factors merge, tipping the patient over into anxiety.

Specific emotions influence certain organ systems preferentially. Anger, rage and related emotions such as resentment, frustration and bitterness constrain Liver qi when they are repressed, extreme, prolonged or unprocessed. Chronic qi constraint will generate heat which agitates the shén and hún, or damages blood which then fails to anchor them.

Grief and sadness are normal and appropriate responses to bereavement and loss. When extreme, protracted or unresolved, they can constrain and deplete Heart and Lung qi, leading to fire and/or deficiency. 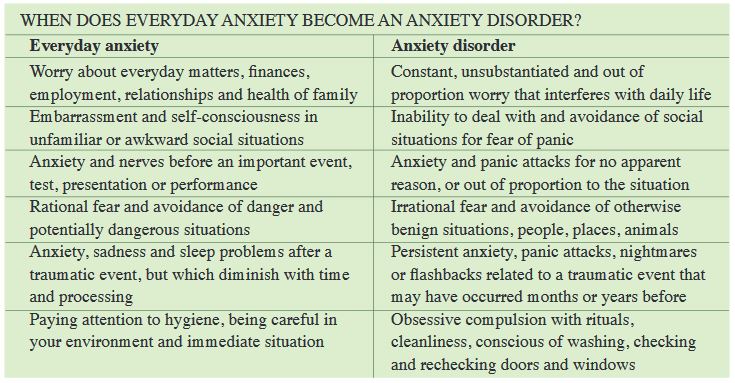 Excessive or irrational worry and rumination can contribute to both constraint and deficiency. Worry can cause Spleen qi to knot, leading to obstruction of the qi dynamic and depletion of Spleen qi. This in turn gives rise to dampness and phlegm, and in combination with a heating diet or heat from constraint, phlegm heat.

The Kidney-Heart axis can be disrupted by sudden physical or emotional shock, leading to a loss of communication between the Heart and Kidneys and disruption to the relationship between the shén and zhì. This most commonly gives rise to anxiety with insomnia, and is often a factor in the anxiety accompanying post-traumatic stress disorder.

Many patients with anxiety disorder have a family history. A predisposition to anxiety may pass through the Heart and Kidneys (shào yīn), the Liver, Spleen, and Lungs, or as a tendency to phlegm accumulation. When the Heart and Kidneys are weak, anxiety is noted during childhood or adolescence. A congenital weakness of Heart qi can lead to an anxious disposition (technically known as Heart and Gallbladder qi deficiency), whereas weakness of the Kidneys leads to fearfulness, timidity and phobias. Congenital weakness of the Lungs contributes not only to respiratory problems, but also to a tendency to be disengaged from the world, and to feelings of isolation and separation.

Congenital weakness of the Spleen can lead to a tendency to worry and to issues around food, compounding deficiency states or phlegm damp accumulation. A phlegm type constitution is usually apparent from a relatively early age, with a tendency to weight problems, concentration difficulties and lack of energy. Conversely, an inherited Spleen deficiency can lead to anorexia and a persistent refusal to eat, or an obsessive or rigid attitude to food, resulting in depletion of qi and blood and a thin body. 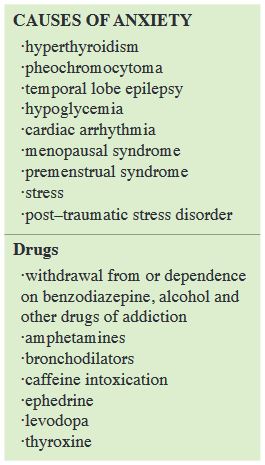 The diet plays a minor role in most cases of anxiety, nonetheless may sometimes contribute, in particular when it contributes to blood deficiency or phlegm. An inadequate diet, too cold, raw, restrictive or lacking in protein can lead to qi and blood deficiency.

Working excessively long hours or laboring to the point of exhaustion depletes Spleen and Kidney yang qi. Any activity that excessively taxes the Spleen will lead to qi and blood deficiency, and the creation of phlegm damp. A sudden blood loss, or increase in the demands placed upon the blood, can contribute to anxiety. This is seen in some postpartum women, where hemorrhage, breast feeding, inadequate rest and poor replacement of blood converge.

Increasingly sedentary work practices and leisure activities are a significant contributor to the rising levels of Spleen deficiency , phlegm accumulation and qi and blood stasis. Regular physical activity and exercise have been shown to have a major positive impact on anxiety and depression.

Patients with anxiety need to be treated with special care. Many will be phobic and fearful of acupuncture. Communication and technical skills are essential to reassure the patient and engage them in a program of treatment. Many patients will be medicated with anxiolytic drugs. Where appropriate and with the collaboration of the prescribing physician, medications should be gradually withdrawn as constitutional treatment proceeds.

Experience shows that acupuncture is very helpful in calming the shén with application of needles on a weekly or twice–weekly basis ensuring the momentum of treatment. Concomitantly, herbs are best for replenishing yin and blood and anchorage to the shén. Acupuncture and herbs are effective at ameliorating the withdrawal effects of pharmaceutical medications, while dealing with the problem that gave rise to the anxiety in the first place. It is important to note other drugs that may be influential, and to elicit a full list of medications or other potentially aggravating substances being used. In addition to the drugs noted in the box to the left, substances such as appetite suppressants and caffeine may be implicated. Excessive use of caffeine (in coffee, chocolate and cola drinks) is a reasonably common cause of anxiety and easy to overlook. 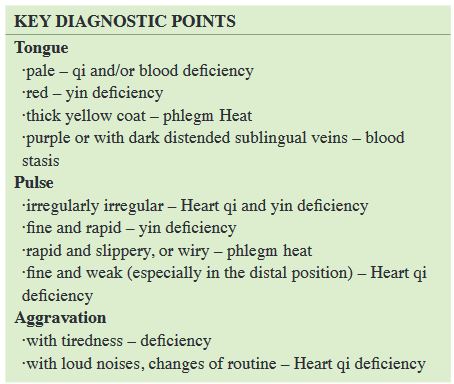 The conventional drugs used to treat anxiety deserve a mention here because they are so widely used, can create dependence and become a source of the problem they were designed to treat.

Anxiety has too often been deemed pathological and medicated inappropriately by health professionals lacking the time or skills to address the feeling or emotions behind the anxiety. Women in particular have often been prescribed sedatives for distress following bereavement or resulting from intolerable domestic or work situations. Such over prescribing and abuse of tranquillizers and anxiolytic agents has brought with it its own problems. Prolonged use of benzodiazepine agents(1) in particular has many unpleasant side effects and withdrawal symptoms(2) . This class of drug acts in a similar fashion to the heavy mineral substances that are used in Chinese medicine to suppress ascendant yang and sedate and anchor the shén(3). The consequences of prolonged use of a single (and unbalanced substance) such as this are several; their bitter cool nature damages Heart and Kidney yin, weakens the Spleen, congests the Liver and further destabilizes the shén.

Depending on the clinical manifestations in such cases, the relevant acupuncture and herbal treatment from this chapter may be applied to ameliorate the heightened anxiety and other symptoms experienced when withdrawing from prescription medication.

William Maclean, M.Sc Chin. Med. is an internationally renowned practitioner, teacher and author from Australia, with over 25 years of clinical experience in the field of Chinese medicine. Will teaches in the Masters programs at the University of Sydney and University of Technology Sydney, and lectures to students and practitioners around the world. In addition to his long years in practice, Will is the author (with Jane Lyttleton) of the excellent reference books: Clinical Handbook of Internal Medicine series Volumes 1, 2 and 3, the Clinical Manual of Chinese Herbal Patent Medicines, the Clinical Handbook of Chinese Herbs: Desk Reference, and the Clinical Handbook of Internal Medicine: 2nd Edition. He also has two excellent distance learning classes for CEUs: Lingering Pathogens, which delves into a common and often unrecognized cause of persistent, baffling and often debilitating health problems, and Thyroid Dysfunction, which delves into the common problem of thyroid disorders, often an unrecognized contributor to 28 conditions such as mood and sleep disorders, and weight issues.