Heart disease remains the number one cause of death in the United States and worldwide, closely followed by cancer, and then COVID-19. The term “heart disease” refers to several types of heart conditions. In the United States, the most common type of heart disease is coronary artery disease (CAD), which can lead to heart attack. Mortality from heart disease is nearly the same for men and women, although the time of a first heart attack for men averages about 66 years old and 70 for women. In this article, the risk factors of coronary artery disease will be described as well as the mechanisms that define how the condition progresses with a focus on atherosclerosis. In addition, there will be an explanation of how traditional Chinese medicine approaches a differential diagnosis and which herbal strategies may assist in supporting individuals who are coping with this condition.

Arteriosclerosis is the generic term referring to the stiffening and consequent loss of elasticity of the arterial wall in association with systemic arterial hypertension, which is commonly called hardening of the arteries, although it is mainly associated with arterioles. Atherosclerosis is an inflammatory disease which develops following lesions/injuries to the endothelium in the intimal layer of arteries. Atherosclerosis is a chronic inflammatory disease, with involvement of both innate and adaptive immunity and participation of macrophages and lymphocytes in the atherosclerotic process. The main complication of this process is the formation of vascular fatty calcification/plaque which causes acute and chronic obstruction of the arterial lumen. This stenosis leads to myocardial ischemia (reduction in blood supply) to the heart muscle, which becomes a significant risk factor for cardiovascular morbidity and mortality including angina and myocardial infarction. 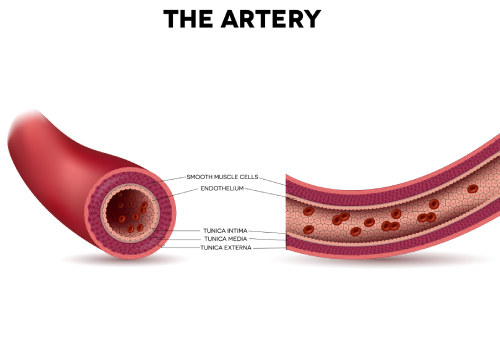 As can be seen in Figure 1, in the wall of a normal artery, there is a small subendothelial space in the intima between the endothelium and the smooth muscle cell layer in tunica media. This is the site where atherosclerosis develops. The stage is set for the development of this condition when, because of genetics and dietary practices, a person exhibits hyperlipidemia, sometimes referred to as dyslipidemia. Abnormally elevated levels of plasma low-density lipoproteins (LDL, the so-called “bad” cholesterol), high levels of very-low density lipoproteins (VLDL), and low levels of plasma high density lipoproteins (HDL) are the primary prerequisite causes of atherosclerosis. Those patients with non-insulin dependent diabetes mellitus (NIDDM, also called “type 2 diabetes”) are particularly prone to developing this condition. Statin drug therapy has significantly reduced coronary artery disease because of its proven ability to lower LDL, although diabetics have difficulty raising HDL regardless.

The second factor in the development of atherosclerosis is injury to the endothelium, which is a single layer of cells lining the lumen of the artery. After this injury, a cascade of events leads to permanent damage of the arterial wall. Several factors cause these lesions. Prominent among them is the inhalation of smoke, from any source. Although the number of smokers has fallen significantly since the 1970s, an estimated 13.7% of Americans still smoke (or vape) tobacco products. A recent Stanford Medical School study demonstrated that cannabis smoking has a similar tendency to injure the endothelium. Importantly, merely a history of smoking significantly increases the risk of developing atherosclerosis. The toxins in smoke enter the bloodstream through the alveoli in the lungs and find their way throughout the body, including the arteries and arterioles.

Another major cause of endothelium injury is the result of diabetes, which features high serum glucose levels. Continuing high glucose levels results in non-enzymatic glycosylation, which causes modification of proteins throughout the body, altering their structure and biological activity. These covalently bound molecules form permanent residues known as Advanced Glycation End-products (AGEs). Having elevated levels of AGEs in the body has a direct impact on the development of many diseases. The damage to tissues caused by these chemicals is the cause of many complications of diabetes including renal failure, eye diseases, peripheral neuropathy, metabolic difficulties, and heart damage. One of these AGEs, Hemoglobin A1c (HbA1c) is a protein on the surface of red blood cells. The HbA1c test is used to monitor blood sugar levels in people with type 1 and type 2 diabetes over time.

Other pathogens that find their way into the blood stream must also be considered as risk factors. These may be inhaled, ingested, or cross the dermal barrier and include viruses, bacteria, fungi, and allergens; chemical irritants such as heavy metals, pesticides, endocrine mimetics (e.g., phthalates), chlorinated hydrocarbons, dioxins, PCBs (polychlorinated biphenyls), et al.; thermal and chemical burns; ionizing radiative sources such as ultraviolet, x-rays, gamma rays, and more.

Essentially, injury to the endothelium results in an inflammatory response by the immune system. Hyperlipidemia and endothelial injury lead to the infiltration of LDL and VLDL particles into the subendothelial space. This is followed by migration into the subendothelial space by monocytes (a type of white blood cell or leukocyte), which circulate in the blood stream and the recruitment and loss of vascular smooth muscle cells (VSMC) from the tunica media. (The loss of VSMCs reduces the elasticity of the arteries and may contribute to increased hypertension.) The monocytes and VSMCs differentiate into macrophages which engulf inflammatory chemicals such as cytokines, chemokines, and oxidized LDL and become what is known as lipid-laden macrophages or “foam” cells. Foam cells are so named because the presence of so much LDL gives them a foamy appearance. Foam cells undergo apoptosis (a genetically directed process of cell self-destruction) resulting in necrotic core formation and unresolved inflammation, which incorporates other immune cells, calcium, and cholesterol crystals into a fibrous cap. Interestingly, this process does not exactly heal the injury to the endothelium nor resolve the inflammation and its products; it sequesters the injury. This sequestration itself becomes a source of pathogenesis over time. (See Figure 2.) 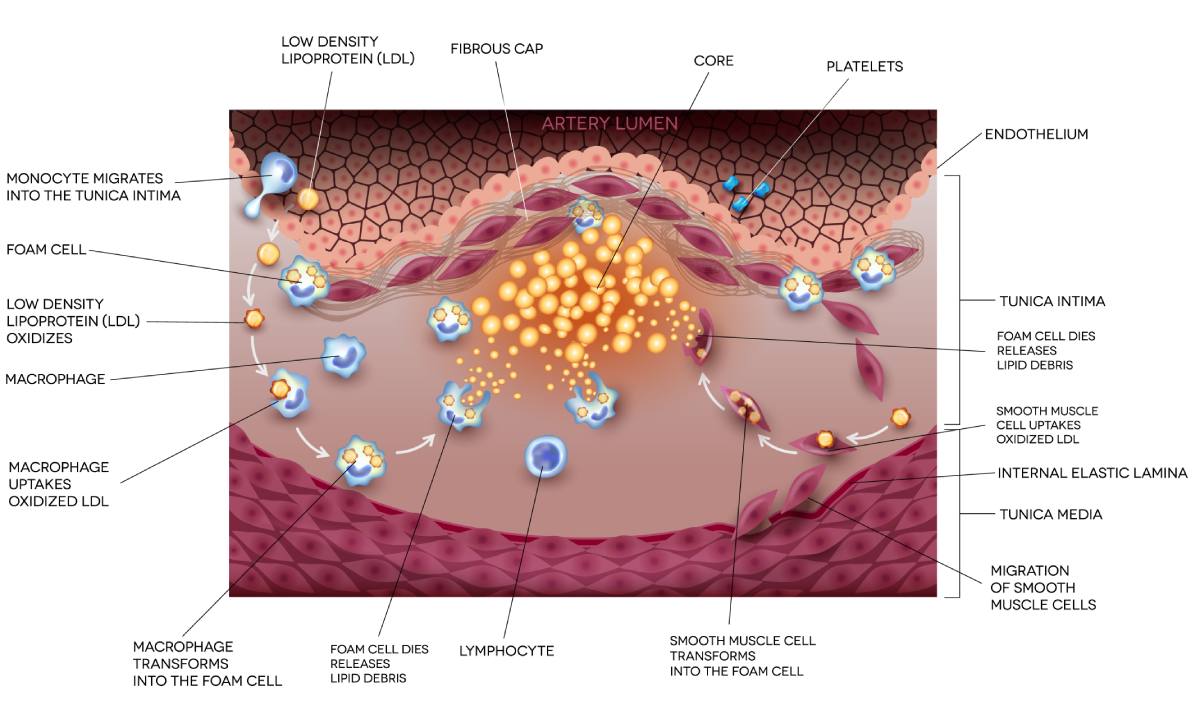 As this fibrous cap grows, it obstructs the lumen of the artery until the stenosis causes a significant reduction of the blood supply to the myocardium and results in angina or when serious enough, myocardial infarction. It is possible that the fibrous cap can rupture into the lumen of the artery, which will attract platelets and create a thrombus (blood clot) which can completely obstruct the vessel. If this thrombus travels in the vessel, it becomes an embolus, which will eventually migrate to a bifurcation of the vessel beyond which it cannot pass, and the result can be a brain stroke or heart attack since the downstream tissue will be cut off from blood and oxygen supply.

Patients should follow the guidance of their cardiologist and follow their pharmaceutical prescriptions, which may include Beta-blockers and other drugs to lower blood pressure, statins, and anti-coagulant therapy. Diagnostically, various blood tests, a cardiac stress test, an echocardiogram, ultrasound and other imaging techniques, and a cardiac catheterization and angiogram may be employed. Medical interventions may include a balloon angioplasty with the placement of stents to open the artery. In more severe cases, a cardiac artery by-pass graft (CABG) may be lifesaving. While it is extremely important to engage with an exercise program and make changes to the patient’s dietary choices (DASH or Mediterranean are at the top of most lists), there has been great deal of research, both ancient and modern, into the use of Chinese herbs to assist a patient in restoring their health.

From a traditional Chinese medicine (TCM) perspective, there are several syndromes contributing to this phenomenon. An early description of the clinical manifestations and treatment of atherosclerosis can be found in the Huáng dì nèi jīng (黃帝內經), which was completed around 500 BC. In TCM, atherosclerosis is usually referred to as Xīn mài bì zǔ (心脉痹阻), which means “Heart pulse paralysis obstruction”. This is a vascular problem that is caused by Qi stagnation, Blood stasis, and/or congealed Phlegm. Presumably, there is underlying Spleen Qi deficiency (metabolic syndrome and diabetes), Damp accumulation (obesity and hyperlipidemia), and Heat (from smoking and other toxins which injure the endothelial lining of blood vessels and from the inflammatory process initiated by the endothelial injury. This Heat results in the congealing of the Dampness into Phlegm.) The Treatment Principles are move Qi and Blood to open the Vessels, resolve and transform Damp and Phlegm, activate and tonify the Qi. Nourish and tonify the Blood and Yin.

Recent experimental prevention and treatment studies using Chinese medicine clearly demonstrate the benefits of lowering cholesterol, especially LDL retention and LDL oxidation, protecting the endothelium, inhibiting monocyte/macrophage/VSMC proliferation and migration, and preventing foam cell formation as well as the accompanying inflammation. Here is a partial list of herbs containing compounds that have been studied that address these treatment principles and some of these concerns.

Empirically found to lower lipids and protect the endothelium in vivo

Invigorates, nourishes, and harmonizes the Blood, stops pain due to Blood stasis

Nourishes and tonifies the Yin and Blood, contains anti-inflammatory compounds

Calms the Liver and anchors the Yang, empirically shown to lower hypertension and serum cholesterol

Calms the spirit and quiets the Heart, Expels Phlegm, clears the orifices

The practitioner should be aware that there are several bona fide concerns regarding the use of Chinese herbs in treatment. First, once a diagnosis of atherosclerosis has been made, it is unlikely that Chinese herbal medicine would be the sole treatment for cardiovascular disease, and it is quite likely that Chinese medicine will be used in combination with other therapies which are included in the medical standard of care. Second, most of the research that has been conducted in the use of Chinese herbs have significant limitations since most studies that have been conducted were in vitro studies, used small sample sizes, and chemically isolated compounds rather than decocted whole herbs, such as are found in traditional formulas. Even when in vivo studies have been conducted, there is little mention of any adverse effects and certainly the reporting of drug-herb interactions is lacking or completely ignored. However, even given these considerations, it is also to be allowed that Chinese herbal medicine may play an important adjunctive role in the treatment of the complexities and multifaceted nature of the development of cardiovascular conditions.