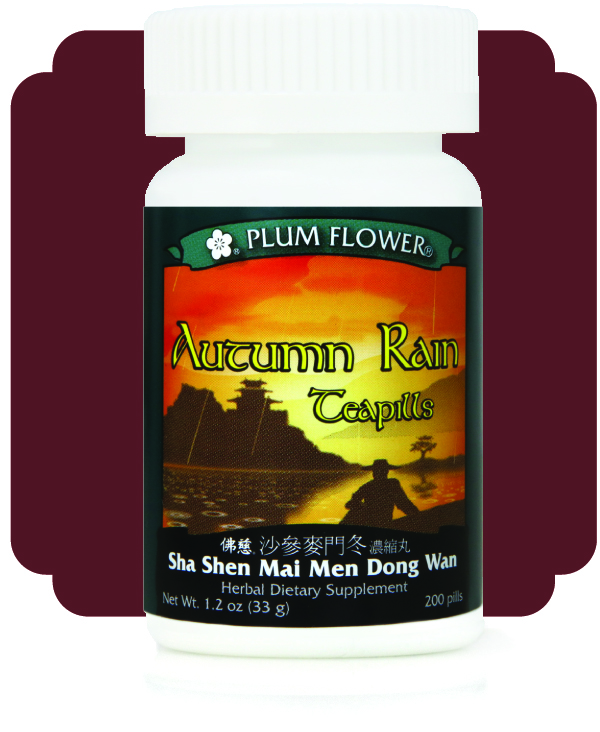 TCM Diagnosis: Injury to the Lung, Stomach and fluids due to invasion by dryness.

Dosage & Administration: The standard dosage is 8 pills, 3 x per day. Administer half an hour before or one hour after eating for optimal digestion & absorption. In the initial phases, dosage may be increased to 8-12 pills 3 times per day, then reduced to a maintenance dose as the formula takes effect. May be used long-term for several weeks to several months over the course of several years.

Cautions & Contraindications: Contraindicated during pregnancy. Use with caution in Spleen deficient patients with a tendency to loose stools, diarrhea, poor appetite or chronic digestive weakness. Contraindicated in phlegm-damp patterns.

Clinical Comments: Dr. Wu Ju-Tong created Sha Shen Mai Men Dong Wan as a variation of Mai Men Dong Tang with the intention of treating dry cough in the Autumn. It was first published in his Systematic Differentiation of Warm Disease⁄Wen Bing Tiao Bian in 1798. This classic formula treats injury due to dryness to the Lung and Stomach, which are very sensitive to both invasion by pathogenic dryness and excessive dryness of the air or diet. It gently replenishes lost moisture to the mucus membranes lining the Lung and Stomach to resolve occasional dry hacking cough and wheezing, as well as thirst, dry throat, mouth, lips and nasal passages.

This pattern often occurs when a patient with underlying Yin deficiency catches an external dryness invasion in Autumn, as wind and dryness can easily exacerbate any pre-existing Yin deficiency. The Lung is known as the “tender organ,” and is easily injured by external pathogens, particularly by dryness and wind.

Lung and Stomach Yin deficiency can be caused directly by strong external pathogens, such as a wind-heat or wind-dryness invasion, particularly in the aftermath of high fevers. Excessively dry air, such as that found in very hot and dry climates, or dry air due to overheating in winter or air conditioning in summer, such as the highly purified air in hospitals, can also be very draining to Lung and Stomach Yin. This formula is also useful to treat Lung Yin deficiency due to inhaling drying airborne irritants, such as smog, wildfire smoke or cigarette smoke, as long as the presentation is dry and there is minimal or no phlegm.

Bei sha shen, Nan sha shen, Mai men dong and Sang ye are the combined chief herbs and make up 55% of the formula. Bei sha shen, Nan sha shen and Mai men dong combine to strongly tonify Lung and Stomach Yin and generate fluids without causing dampness, clear Lung heat and slightly dispel phlegm. Sang ye disperses the warm-dryness pathogen, moistens, and restores the Lung’s ability to disperse and descend, thus quelling rebellious Lung Qi to stop occasional cough. Yu zhu and Tian hua fen as the deputies support the chief herbs in generating fluids, nourishing Lung and Stomach Yin without causing any stagnation, clearing and draining Lung heat, and allowing for the easy venting of the external dryness. Bai bian dou and Gan cao, the assistant and envoy, gently tonify Earth to support Metal. They harmonize and nourish Stomach Qi while aiding the Spleen to transform and transport fluids, promoting both the production of fluids and the Spleen’s ability to direct them upwards to the Lung. Gan cao also regulates the functions of the other herbs, moistens the Lungs, and stops occasional cough.

Combinations: For stronger signs of a warm-dryness invasion causing Lung heat or fire, switch to Qing Zao Jiu Fei San. For concurrent constipation, may be administered with Tao Ren Wan. For Lung and Kidney Yin deficiency leading to heat in the Blood that forces out of the vessels in the Lung, switch to Bai He Gu Jin Wan.