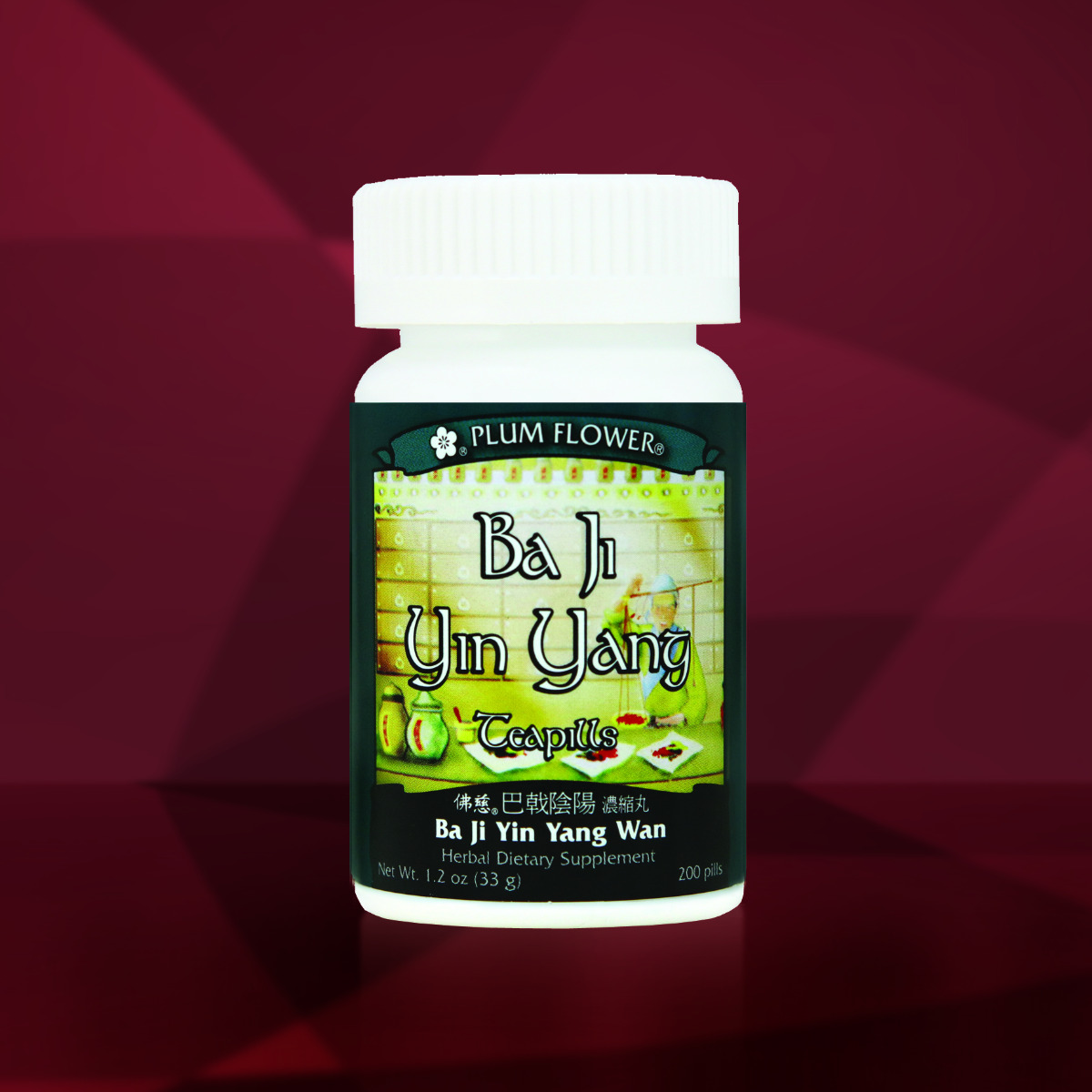 Tongue: pale, swollen, coat may be wet or slippery

Pulse: deep, weak, may be slow

Dosage & Administration: The standard dosage is 8 pills, 3 x day. Administer half an hour before or one hour after eating for optimal digestion & absorption. In the initial phases, dosage may be increased to 8-12 pills 3 times per day, then reduced to a maintenance dose as the formula takes effect. May be used long-term for several weeks to several months. May be used over the course of several years. Monitor for signs of Yin deficient heat.

Cautions & Contraindications: Contraindicated for conditions due to excess. Contraindicated during the early stages of acute infection or illness, such as cold or flu. Use with caution in Yin deficient patients with deficiency heat.

Clinical Comments: As the name Ba Ji Yin Yang Wan implies, this “Yin Yang” formula featuring Ba Ji Tian restores the equilibrium of Yin and Yang to the body by warming Kidney Yang and the Ming Men fire while simultaneously preserving the Yin fluids that keep the fire in balance. Ba Ji Yin Yang Wan is specifically indicated for Kidney Yang deficiency leading to the instability of the lower jiao, resulting in the inability to store Jing-essence and contain or control body fluids. Due to the inability to properly store the Jing-essence there are symptoms of the leakage of semen and vaginal fluids, and the inability to control reproduction leading to common sexual issues in men. Due to the Kidney’s inability to control water metabolism and the proper opening and closing of the two lower gates (urethra and anus), there are also symptoms of body fluids leaking through the urine and stool. The formula is designed to stabilize of the gate of essence to optimize fertility and strengthen the Kidney’s ability to control the two lower gates.

Ba Ji Yin Yang Wan is also used as a general Kidney tonic to slow the aging process and restore vital energy. As we age the Kidney Yin and Yang begin to slowly diminish, and symptoms such as simple forgetfulness or age-related cognitive decline, weakened vision, bone and joint issues (particularly generalized stiffness, occasional low back and knee pain), and urinary issues such as frequent daytime and nighttime urination, or occasional incontinence begin to appear. Ba Ji Yin Yang Wan works to combat the effects of aging by strengthening the Kidney’s ability to store the Jing-essence and rule the production of Marrow, which both fills the brain (the Sea of Marrow) and supports the bones. It also strengthens the Kidney’s ability to house the Zhi, the spirit which gives us willpower and determination, as well as concentration and memory. Finally, it also supports the Liver Blood to relax tight tendons and benefit the eyes and vision.

The elegance of this formula lies in its capacity to tonify Kidney Yang and restore the Kidney’s ability to restrain Jing-essence and fluids, while at the same time nourishing the Yin, Blood and Jing-essence to replace the loss. The chief herb is acrid, sweet, slightly warm Ba ji tian, which gently tonifies the Kidney and fortifies the Yang, benefits the Jing-essence, and strengthens sinews and bones. Yin yang huo and Bu gu zhi support Ba ji tian to more strongly tonify and warm Kidney Yang and the Ming Men fire, strengthen the lower back and the extremities. Bu gu zhi also directly stabilizes the Jing-essence, secures the urine and helps the Kidneys to grasp the Lung Qi. Xu duan and Du Zhong tonify the Liver and Kidney, strengthen the lower back, generally strengthen the body’s tendons, bones and muscles, and secure the Chong and Ren vessels. Bu gu zhi, Lian zi, Jin ying zi and Shan zhu yu are astringent herbs that work with the Yang tonics to contain the Jing-essence, restrain the inappropriate leakage of fluids, and thus secure the urine and stool. Because Yin and Yang are so intimately entwined, deficiency of one almost always involves some degree of deficiency of the other. Therefore, Shu di huang, Shan yao, and Shan zhu yu nourish Kidney and Liver Yin, augment the Marrow and secure the Jing-essence, as in Liu Wei Di Huang Wan, following the Zhang Jiebin’s saying: “assist the Yang from within the Yin.” Shu di huang also aids the Kidneys to grasp the Qi upon inhalation. Dang gui, Bai shao, and Gou qi zi, tonify the Blood, Yin and replenish the Jing-essence. Dang gui and Bai shao also nourish the sinews to release cramping and tightness from the tendons, while Gou qi zi brightens the eyes to mitigate some of the effects of aging.