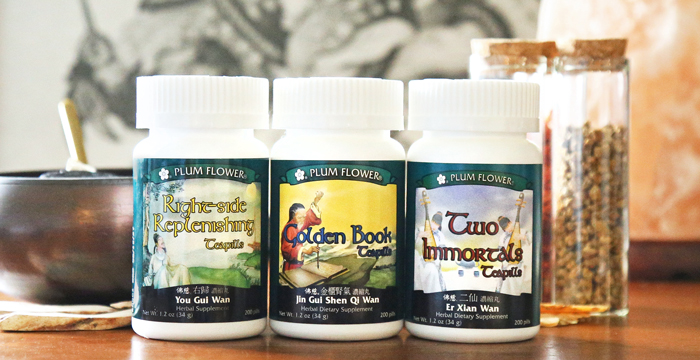 Winter is upon us and the cold winds have begun to blow once again. This is an ideal time to strengthen and tonify the Kidneys in order to ensure the Yang Qi is warming the interior, channels and collaterals.

The TCM functions of the Kidneys include storing the Essence, governing fluid metabolism in the lower burner and lower extremities, receiving the Qi from the Lungs, ruling the two lower orifices, regulating reproductive and sexual function, and housing the Life Gate (Ming Men – 命門) Fire.

Circumstances that can weaken the Kidneys include prolonged illness, periods of excessive work and stress, intemperance, insufficient diet, and simply the passing of years. Being the root of the body's vitality, carefully maintaining the health of the Kidneys is essential in supporting a long and healthy life.

The following are Mayway's three most popular Kidney tonic prescriptions:

One of Zhang Zhong-Jing's many extraordinary prescriptions first described in Essentials from the Golden Cabinet c. 220, Jin Gui Shen Qi Wan was developed to address Kidney deficiency patterns. The prescription includes herbs that both nourish the Yin and warm Life Gate fire. This unique formula was designed not so much to tonify the Kidney Yang, but rather to generate Kidney Qi, which represents the balanced flourishing of both Kidney Yin and Yang. It should be noted that the first six ingredients are those of Liu Wei Di Huang Wan (六味地黃丸), which was a modification of Shen Qi Wan by the Song Dynasty pediatrician Qian Yi.

The prescription essentially tonifies Kidney Yin while warming the Life-Gate fire with Fu zi and Rou gui. Additionally, the prescription tonifies the Spleen with Shan Yao, nourishes the Liver Yin while restraining the leakage of Essence with Shan zhu yu and the Kidney with Shu di huang. Of particular note is the inclusion of two herbs that move fluids, Fu ling and Ze xie, and one that frees and circulates the Liver, Mu dan pi. These three herbs prevent Qi and fluid stagnation in the Spleen, Liver and Kidneys, while allowing the previous three herbs to tonify these organs.

The classical indications of Jin Gui Shen Qi Wan were poor fluid circulation and stagnation in the lower Jiao leading to frequent copious urination, the Kidney Qi failing to control the urinary bladder and Damp accumulation in the lower abdomen and legs. Rou gui facilitates the formula's ability to both warm the lower Jiao and guide the floating Yang back to its source in the Kidneys. The prescription supports all functions of the Kidneys in a generalized way by supporting the Kidney Qi.

You Gui Wan is a relatively contemporary prescription compared to Ji Gui Shen Qi Wan, having first been published in Collected Treatises of Zhang Jin-Yue in 1624. You Gui Wan is a true Kidney Yang tonic. The source text describes You Gui Wan as a treatment for...

"Primal yang deficiency and decline in the prenatal endowment such that the fire at the gate of vitality wanes. Because it is unable to generate earth, the Spleen and Stomach are deficient...cold is in the lower burner and pathogenic water arises, leading to floating edema."

Diminishing of the Life Gate Fire impairs the Kidney's ability to regulate urinary and reproductive function, maintain proper body temperature, support the back and lower extremities, nourish the Sea of Marrow, firm the Will, support the Upright Qi, and to maintain youthfulness and vitality. The herbs Shu di huang, Gou qi zi and Dang gui strongly nourish the Blood, and tonify the Essence in combination with the Yang tonics Du zhong, Tu si zi and Rou gui. Shan yao tonifies both the Spleen and Kidney and assists in astringing urination, while also securing the Essence in the lower Jiao. Finally, Shan zhu yu tonifies the Liver and Kidney, and also secures the Essence.

Common complaints associated with Yang deficiency include aversion to cold, coldness of the extremities, low back weakness and discomfort, variances in normal urination function, possible reduced fertility and sexual function, diminished memory and mental clarity, and a loss of youthfulness and vigor. Kidney Yang deficiency can originate from prenatal weakness, poor nutrition, excessive work or stress, or from the result of a prolonged illness.

The Two Immortals is named after the two chief herbs, Xian mao and Xian ling pi (Yin yang huo). This modern formulation was developed in the 1950's by Shanghai physician Zhang Bo-na. The clinical application of Er Xian Wan is Kidney Yin and Yang deficiency, with deficient heat symptoms predominating.

On initial observation, the prescription and its clinical application may seem mismatched. Xian mao, Yin yang huo and Ba ji tian are all strong Kidney Yang tonics, and make up nearly 60% of the prescription, while Huang bai, Zhi mu and Dang gui make up roughly 40% by comparison. One would think the percentages of these two groups should be reversed for the prescription to function as intended. What must be kept in mind are two important functions of Yang Qi. First, sufficient Yang is required to generate Yin, and second, it is the function of the Yang to secure Yin in the lower Jiao. Confirmation for selecting this prescription can be made by observing the pulse: the right proximal pulse will be more deficient in comparison to the left pulse.

Indications for Er Xian Wan are those that can be typical of menopause, and include hot flashes, night sweats, spontaneous perspiration, diminished libido, nervousness, irritability, sleep disturbance, frequent urination, and fatigue. Cold extremities and cold intolerance are especially helpful symptoms when considering selecting this prescription. It is often the case that Er Xian Wan is the second prescription used in treating menopausal symptoms, possibly after the initial use of another formula such as Zhi Bai Di Huang Wan being ineffective. Attention should be paid in looking for symptoms of both Yin and Yang deficiency when considering this prescription.