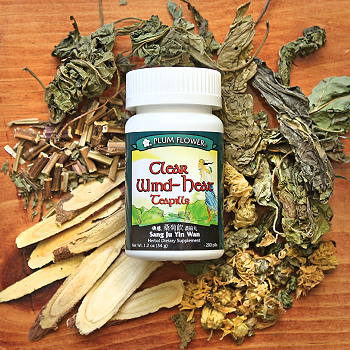 As Spring gives way to Summer and the days lengthen and warm, we make time to enjoy nature and the great outdoors. The neighborhood kids are out playing at the park or in the woods, the grass is high, the flowers bright and colorful, and the trees filled with maturing foliage. It's the time of year we are out in nature and enjoying the world around us.

With nature in full bloom, not all of our friends and neighbors are necessarily enjoying all that nature provides. For some, Summer can also be a time of red irritated eyes, runny noses, sneezing, scratchy throats, and cough and wheezing, resulting from a combination of Wind and Wei Qi deficiency. External Wind-Heat conditions characteristically display symptoms of mild fever, aversion to wind, perspiration, thirst, headache, sore throat, red irritated eyes, and a mild dry cough. The pulse is generally floating, the tongue coating is usually white or slightly yellow when more heat is present, and the tip of the tongue is slightly red. The pulse is moderately floating, and possibly rapid, if Heat is more pronounced. These symptoms are commonly associated with an external Wind Heat Invasion. External Wind Heat symptoms can also manifest in the absence of a pathogenic influence, and these conditions are the result of simple exposure to environmental Wind, Heat and Dryness, such as pollen, dust, and animal dander.

Though the above two conditions have fundamentally different etiologies, the commonality of the symptoms and signs allows both to be treated with the same herbal formula. Fortunately, nature has also provided us with a remedy to her overabundance: Sang Ju Yin, 桑菊飲 or “Mulberry and Chrysanthemum Drink”.

First described in Systematic Differentiation of Warm Pathogen Diseases, Sang Ju Yin was developed to treat externally contracted Wind Heat disorders. This formula is often compared to Yin Qiao San in the classical literature, and Wen Bing theory indicates both formulas for treating early stage Wind Heat. While both prescriptions effectively treat external Wind Heat, Yin Qiao San is considered more effective in releasing the Exterior, and as such is best suited when the Evil Qi (邪气 Xié qì) is primarily located in the Wei Qi level and not significantly affecting the Lungs. On the other hand, Sang Ju Yin is considered a better formula for addressing the Lung Qi failing to descend, as well as symptoms of Dry Heat in the exterior. Additionally, Sang Ju Yin is considered weaker than Yin Qiao San in releasing the exterior.

The classic application of Sang Ju Yin is for the treatment of early stage of a Warm Evil Qi. The etiology of this pattern is attributed to the failure of the Lung Qi to disseminate and descend due to an attack on the Lung by Wind Heat. Wen Bing theory divides this pathology into two parts: 1) attack on the Wei Qi level and the Exterior by Wind Heat; and 2) failure of the Lung Qi to spread and descend due a Wind Heat attack on the Lung. As you will see below, this differentiation is important because it highlights several different ways in which Sang Ju Yin can be used clinically.

The symptoms associated with the classic clinical picture include moderate to severe failure of the Lung Qi to descend, slight fever and above-average thirst. The associated tongue coating is thin and white, and the pulse is floating and rapid. This is typical of the early stage of warm Evil Qi. This enters through the nose and mouth, obstructs the collaterals of the Lung, and blocks its descending and disseminating function. The other symptoms of mild fever, thirst, aversion to cold and the floating rapid pulse also indicate External Heat located in the exterior. 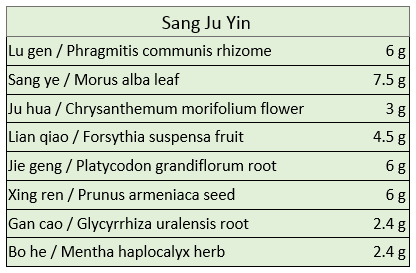 Prepare as a decoction. Do not cook for more than 20 minutes.

The chief herbs Sang ye and Ju hua are light, sweet and cooling, and both enter the Lung and Liver to disperse Wind Heat from the Exterior. Additionally, Sang ye's sweet, bitter nature moistens and cools the Lung and eyes, and descends the Lung Qi. Ju hua disperses Heat stagnation in the head, while also cooling and releasing congestion in the face and eyes. Bo he releases surface Wind Heat, and benefits the head, eyes and the throat. The bitter, cold Lian qiao clears Heat, soothes the throat, and dispels redness, swelling and irritation in the mucus membranes of the face and upper respiratory tract. The second pair of deputies, Jie geng and Xing ren, open and descend the Lung Qi, while moistening dryness. Lu gen, as the assistant, clears heat and moistens fluids in Lung. As the envoy, Gan cao clears Heat and swelling and harmonizes the formula.

The second, but perhaps more common application for Sang Ju Yin, is simple exposure to the environmental factors of Wind and Heat in the absence of pathogens. The time of year this occurs most often is in the late Spring and Summer. The symptoms of this picture include dry itchy eyes, scratchy throat, runny nose, sneezing, slight cough or wheezing, dryness of the upper respiratory tract, thirst, and slight to moderate irritability due to the above symptoms. This picture is typical of environmental and seasonal sensitivities, food sensitivities, animal dander, and natural or artificially hot, dry climates. The formula's ingredients address these symptoms in the same manner as described above.

To increase the effectiveness of Sang Ju Yin when prescribed in pill or powder form, it can be taken with cold green tea (camelia sinensis) or mulberry leaf tea.

Sang Ju Yin is a gentle yet effective Wind Heat remedy. The formula is light and cooling and follows the adage that in the treatment of the Upper Jiao "the medicine should be as light as a feather." Whether used for external Wind Heat, or simply to ease seasonal and environmental sensitivities, Sang Ju Yin has a useful role to play during the sunny days of summer.