We are delighted to announce that Bamboo Pharmacy™ Cordyceps Cs-4 is one of the newest products from Mayway Herbs. This form of cordyceps is derived from wild Ophiocordyceps sinensis and is synthesized using liquid fermentation.

Cordyceps is a genus of fungi that includes over 600 species, which are found world-wide. Most Cordyceps species are endoparasites that prey mainly on insects and arachnoids. 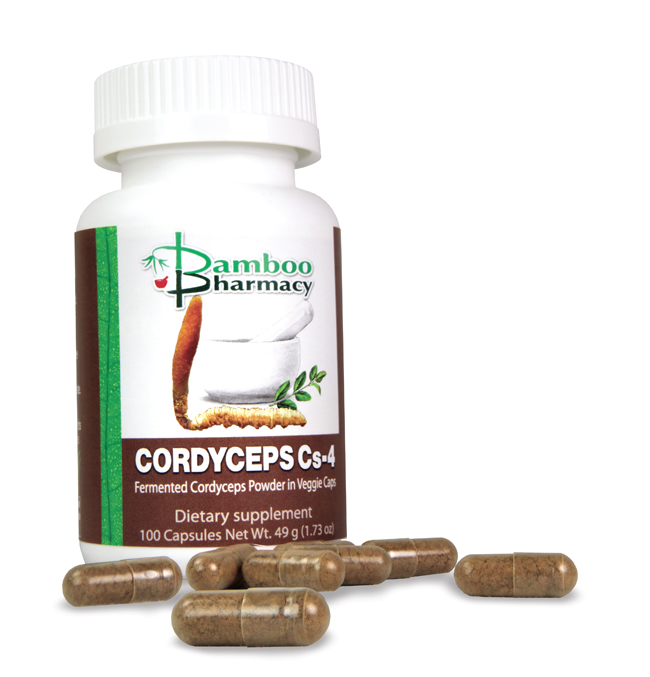 The species of Cordyceps used in Traditional Chinese Medicine (TCM) is Dōng chóng xià cǎo (冬蟲夏草), formerly known as Cordyceps sinensis. Dōng chóng xià cǎo is the Chinese translation from the Tibetan name and it literally means “winter worm, summer grass.” The first mention of Dōng chóng xià cǎo in TCM was in the Ben Cao Bei Yao in 1694. Using DNA sampling in 2007, cordyceps sinensis was shown to be unrelated to most of the rest of the members of the genus; as a result, it has been renamed Ophiocordyceps sinensis. Ophiocordyceps sinensis parasitizes the underground caterpillar larvae of moths within the family Hepialidae, known as ghost moths. The fungus is hand-collected in meadows and understory detritus of the Tibetan Plateau in southwest China, and in the Himalayas of Nepal and Bhutan, between elevations of 3000 m and 5000 m. The spores of the fungus infect the living caterpillar and germinate within it. The mycelia kill and mummify the larva and then a dark brown stalk-like fruiting body emerges from the corpse and stands upright. The “herb” is the fruiting body and the mycelium mass within the dead body of the caterpillar. The herb is collected in the early summer after the stromata have emerged from beneath the ground but before the spores are ejected from the fruiting body.

This wildcrafting of Dōng chóng xià cǎo is quite unsustainable and cannot meet the demand for this valuable herb. Currently, the wild herb is available on Alibaba for $8000-$59,000 per kilogram. The available supply of Ophiocordyceps sinensis has been so adversely affected by climate change and overharvesting that is listed as an endangered species by the Chinese government. Moreover, the fruiting bodies harvested in nature usually contain excessive amounts of arsenic and other heavy metals, making them potentially toxic. Sales have been strictly regulated by the Chinese SFDA (State Food and Drug Administration) since 2016.

Because of these concerns, efforts were initiated in the 1970s to cultivate Ophiocordyceps sinensis. By DNA analysis, it was discovered that the fungal/insect complex included an anamorph (an asexual stage, primarily Hirsutella sinensis) and a symbiotic relationship with eight other endoparasites, especially Paecilomyces hepiali Chen. There may also be bacterial components. The DNA of each identifiable species is shared within the fungal/ insect complex, including portions of the caterpillar’s DNA.

Unfortunately, cultivation mimicking the fungal/insect complex has resulted in failure. Consequently, all Cordyceps products currently on the market are isolated fungal strains, cultivated separately via aseptic liquid fermentation or grown on grain substrate. In addition, cultivation of Ophiocordyceps sinensis on grain has been proven impossible. The cordyceps species that is grown on grain is Cordyceps militaris, the subject of which will be explored in a future article. Much of the “Cordyceps sinensis” sold today is actually an extract of the fruiting bodies of Cordyceps militaris or the fruiting bodies plus the mycelia, including the grain. The quality can vary widely. 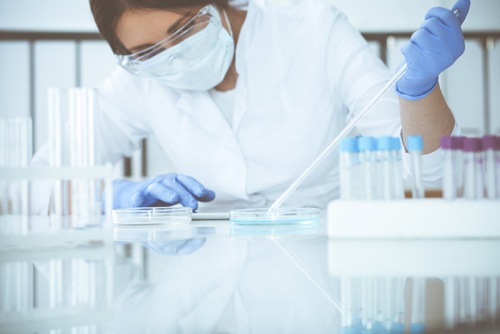 In the 1980s, Paecilomyces hepiali Chen was isolated from Ophiocordyceps sinensis and mycelia were produced using aseptic liquid fermentation. This Fermented Cordyceps Powder (Fāxiào chóngcǎo jūn fěn 發酵蟲草菌粉) is known as Cordyceps Cs-4. This process takes place in a tank of sterilized liquid nutrient media under aerobic conditions. The mycelial biomass obtained is separated from the fluid media, dried, and then ground to a powder. The cultivated fungal mycelia of Cs-4 have been demonstrated to produce pharmacological effects like those of the wild specimens. This product is approved by the Chinese State Food & Drug Administration (SFDA) and is considered to be an ideal substitution for natural Ophiocordyceps sinensis.

The biomedicine pharmacological attributes are prohibited from discussion by U.S. FDA (Food and Drug Administration) regulations. However, see Das et al. in the resource section for a comprehensive, and exciting academic journal review. These biological activities are correlated with the bioactive compounds present in Cordyceps which include nucleosides, sterols, flavonoids, cyclic peptides, phenolics, bioxanthracenes, polyketides, and alkaloids.

Cordycepin and Cordycepic Acid are the two main marker bioactive molecules having potential therapeutic applications, and which are used to determine quality of various cordyceps products. Structurally, cordycepin is 3′- deoxyadenosine. Cordycepin is an analog of adenosine derivatives, which are differentiated from adenosine nucleoside by the absence of one oxygen molecule at the third position carbon of ribose sugar. Adenosine is one of four nucleoside building blocks of DNA and RNA, which are essential for all life. Its derivatives include the energy transport molecules adenosine mono-, di-, and triphosphate, also known as AMP/ADP/ATP. The similarity to adenosine is so close that many enzymes cannot differentiate cordycepin from adenosine. One example is that if cordycepin is incorporated in a mRNA molecule within a malignant cell, it causes premature termination of protein synthesis with a deleterious effect on those cells.

According to the Chinese Pharmacopeia (2015) and the Chinese State Health Department, the specification for adenosine in Cs-4 is “Not Less Than 180 mg/100g.” The Certificate of Analysis (available upon request) yields an assay value of 294.6 mg/100g for Bamboo Pharmacy™ Cordyceps Cs-4.

Cordycepic Acid is structurally an isomer of quinic acid, possessing various potential medicinal applications. Quinic acid is found in cinchona bark, coffee beans, eucalyptus bark and is the building block in the production of Oseltamivir. Cordycepic Acid’s structure was found to be the crystalline substance of D-mannitol. It differs mainly from quinic acid as it is dextrorotatory instead of the levorotary form of quinic acid. D-Mannitol has many medicinal applications, one of which is that is a mild diuretic. For this reason, there is a concern that D-mannitol may mask other drugs and it is listed is on the World Anti-Doping Agency's banned drug list, although cordyceps is not.

According to the Chinese Pharmacopeia (2015) and the Chinese State Health Department, the specification for D-mannitol in Cs-4 is “Not Less Than 8%. The Certificate of Analysis yields an assay value of 16.1% for Bamboo Pharmacy™ Cordyceps Cs-4. 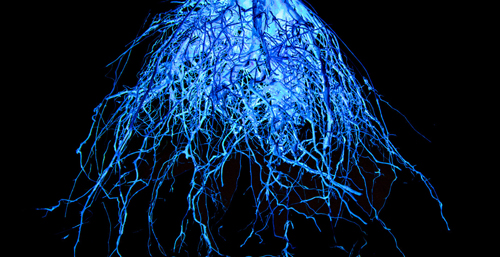 The variety of potentially therapeutic chemicals found in Cordyceps Cs-4 is remarkable. Polysaccharides derived from Cordyceps Cs-4 primarily include Beta-glucan, mannan, heteroglycan, and glycoprotein, comprising 4.9 g/100g of the herb. The mycelia contain all the essential amino acids, numerous proteins, peptides, polyamines, and several rare cyclic dipeptides. In addition to adenosine, other nucleosides such as adenine, inosine, cytidine, cytosine, guanine, uridine, thymidine, uracil, hypoxanthine, and guanosine have been isolated from Cordyceps Cs-4.

According to Traditional Chinese Medicine principles, Dōng chóng xià cǎo gently tonifies the Kidney Yang and augments Jing/Essence, nourishes the Lung Yin, supports the protective Qi, transforms Phlegm, and assists in stanching blood in the Lung from Yin deficiency. Cordyceps is a rare herb in that it is harmonizing of both Yin and Yang. Some attribute this to its origin in the earth-bound underground caterpillar larva and its fruiting body ascending towards heaven.

The recommended dosage of Cordyceps is 3-9g per day with longer-term use providing the best results. Cordyceps is generally considered to be safe. Dry mouth, constipation, nausea, diarrhea, abdominal distention, irregular menstruation, and occasional allergic reactions have been reported. Caution is advised in pregnant and lactating women, those with auto-immune diseases, and since it is a tonic herb, those experiencing exterior Evil Qi symptoms.

This amazing adaptogen herb, Cordyceps Cs-4, is now available and affordably priced for you and your patients from Bamboo Pharmacy™ and Mayway Herbs. Rest assured of its authenticity, quality, and sustainability. After researching its numerous applications, you will understand its popularity among researchers, elite athletes and the generally health minded. It’s definitely the office favorite here at Mayway!