Damp as a Vector of Pathogenesis

Damp (shī xié 湿邪) is one of the six exogenous pathogenic influences defined in Traditional Chinese Medicine. In English, as an archaic medical term, the word “damp” originally meant “vapor”, “steam" or "smoke", especially that which was harmful or noxious. In this article, we will focus on the concept of Dampness specifically as it relates to Lung health in TCM, particularly in light of the pathogenesis of Damp involved in the morbidity and mortality of COVID-19.

Late summer is the season associated with Damp, which in China is historically an abundantly hot, and rainy season. Nowadays, Damp diseases can occur in any season and may be caused by living in damp conditions and places, although a Damp constitution predisposes one to this pathogen. Damp is a Yin pathogenic influence which impairs Yang and easily obstructs the circulation of Qi. Damp disorders have a gradual onset and are characterized by heaviness of the body and turbidity, which can manifest as a heavy sensation in the head and limbs, often with accompanying soreness, pain in the joints, chills and fever. There may be turbid discharges from the body such as suppurating sores, weeping eczema, morbid leukorrhea, and cloudy or bloody urine. Due to this inherent “stickiness”, Damp diseases progress slowly and can be very difficult to dispel. 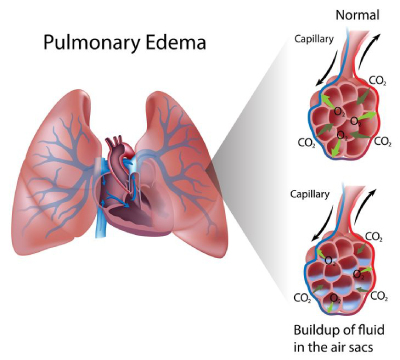 When Exterior Dampness invades the body, it tends to invade the extremities first, typically showing in the knees or lower legs as edema. From there, it can flow upwards and affect many of the Zang-fu organs. Exterior Dampness can also combine with Wind to lodge in the Urinary Bladder, Large and Small Intestine, and Gall Bladder Channels and cause painful obstruction of Qi (bì zhèng 痹症). Careful syndrome diagnosis is called for and the various preponderances of Wind, Cold, Heat, and Damp must be assessed, as well as underlying patterns such as Blood deficiency or Blood Stasis which further complicate treatment strategies.

One manifestation of this Spleen dysfunction is the presence of excessive adipose tissue, which is the storage of excess dietary fat and carbohydrate in a watery matrix. This excess “dampens” the Spleen Qi because it becomes unnecessary for the Spleen to work so hard, as there are more than enough calories present to sustain the organism. We see this pattern repeatedly in our modern lifestyles. Additionally, this water can accumulate as edema since the deficiency of Qi affects the Kidney’s ability to govern water and, to a lesser extent, the Lung’s ability to govern the ascending and descending aspects of water metabolism. Likewise, the Qi of the San Jiao (Triple Burner) and the Urinary Bladder is compromised, water regulation in the San Jiao is unregulated and urination becomes difficult. Internally, Dampness accumulation can also progress to include aspects of Heat and Cold and become consolidated into Phlegm.

When there is Damp turbidity interfering with the function of the Spleen, aromatic herbs are used to remove the turbid and restore the Spleen. This is known as “Transforming Damp.” Many authors prefer the phrase, “Resolving Damp” for “化湿 huà shī”, since in this context, “resolve” means to cause to disperse or to be absorbed without the formation of pus. Certain herbs that are usually warming, which Resolve Damp, are also known to Dry Dampness. Formulas that Resolve Damp include Ping Wei San (Calm Stomach Teapills) and Huo Xiang Zheng Qi San/Wan.

Cold syndromes involving Dampness are caused by True Internal Cold or by the inability of the Kidney Yang Qi to transform water. The accumulated water becomes pathogenic causing Dampness or edema. This can be exacerbated by deficient Spleen Yang. The treatment principle is to Warm the Yang while Promoting Urination. Formulas include Zhen Wu Tang Wan (True Warrior Teapills), Bie Xie Fen Qing Wan, and Ji Ming San (Powder to Take at Cock’s Crow).

In turning our attention to the pathogenesis of Dampness involved in the morbidity and mortality of COVID-19, it is interesting to note that even though the virus is an external pathogen, the Dampness and much of the Heat found in the progression of the disease is a response of the patient’s immune system.

Chapter 21 of “Simple Questions” which says, “Fluids enter the Stomach, the refined part is transmitted upward to the Spleen. Spleen Qi, in return, spreads it upwards to the Lungs who, regulating the Water Passages, send it down to the Bladder.” However, in this epidemic disease, the pattern often presents the Lung Qi failing to descend and to regulate the Water Passages causing an accumulation of Dampness which can result in respiratory arrest and multiple organ failure in a significant number of cases.

The Lung Yin includes two types of cells, mucus-making goblet cells, which help protect lung tissue from pathogens and to make sure the lung doesn’t become dry; and ciliated epithelial cells that have hair-like protrusions from the cell wall, which keep the mucous moving, clearing out detritus like pollen and viruses.

During the onset of the SARS-CoV-2 infection, the virus quickly invades and kills lung cells, especially the ciliated epithelial cells, often without the patient experiencing any obvious signs of initial distress. These cells are sloughed off and the patient’s airways become filled with debris and fluids. Additionally, the presence of the virus engenders a systemic fever and an inflammatory response throughout the lung, including the alveoli. Importantly, this can be understood as Damp Heat in the Qi Level.

Since the function of the lung to exchange O2 and CO2 is being compromised, the Lung Qi fails to descend and a cough and shortness of breath result. Most patients can fight the disease with immune cells to clear away the damage and repair the lung tissue. With prophylactic support, including supplemental oxygen, hospital care, and the appropriate administration of Chinese herbal therapy, most of these patients can recover.

The immune system of some patients, however, flood the lungs with immune cells to clear away the damage and repair the lung tissue in a hypersensitive response. This systemic inflammatory response is referred to as a “cytokine storm syndrome” which involves lymphocytic and monocytic infiltration of the lung and the heart, causing acute respiratory distress syndrome and often subsequent cardiac failure.

Cytokines are proteins used by the immune system as alarm beacons—they recruit immune cells to the site of infection. This inflammatory immune response kills everything in the affected area in a bid to save the rest of the body, resulting in additional damage to the Lung Yin. The resultant lesions from the attack of the virus and the hyperactive immune response creates literal holes in the alveoli. This compromises the membrane of the blood-air barrier and serum from the blood of the lung capillaries oozes into the lungs. In this form of pulmonary edema, the patient drowns from the accumulation of debris from dead cells, mucous, and the serum exudate. Increased oxygenation from external ventilation can force oxygen exchange but since the action of the viral damage and the inflammation creates scar tissue and a stiffening of the lung tissue, the pressure from ventilation can create addition damage, which is why the longer a patient is on a ventilator, the poorer the prognosis.

This flooding of the lungs across the blood-air membrane is exacerbated by hypertension, which is a significant risk factor for a poor prognosis of COVID-19. Among other risk factors is Type II diabetes, which is co-morbid not only with hypertension and but also with obesity, which can be seen as a Damp constitution with Spleen Qi deficiency. An additional risk factor that is co-morbid with diabetes is kidney disease, which impairs the body’s ability to remove Damp accumulation through urination.

Among the novel formulas from China, many include herbs or formulas that address the presence of Damp or Damp Heat, such as Qing Fei Pai Du Tang, which includes many of the herbs from Wu Ling San, and Wuhan Damp Heat Obstructing the Lung Syndrome, which consists of Xiao Chai Hu Tang (Minor Bupleurum Decoction) with San Ren Tang (Three-Nut Decoction).

In conclusion, this pathogen requires careful syndrome differentiation and quick and decisive action by the practitioner who is often able to co-manage these cases with the elegance that can be found in traditional Chinese herbal medicine formulas. The prevention and mitigation of Dampness and Heat will prove crucial to the successful prognosis of these patients.