This article is an excerpt from the Clinical Handbook of Internal Medicine: The Treatment of Disease with Traditional Chinese Medicine, Volume 3 by Will Maclean and Jane Lyttleton. It will be presented in two parts with the first containing the introduction and overall outline of the condition and second containing a detailed breakdown of the individual TCM patterns, their clinical features, treatment principles, variations and acupuncture protocols. While the book also contains sections that discuss herb and formula recommendations, for compliance reasons, those sections cannot be presented by Mayway. Please see the book for this information. 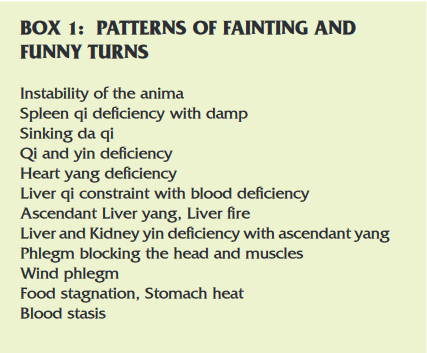 Fainting is a sudden, brief loss of consciousness. The episode may be preceded by a variety of symptoms such as dizziness, hyperventilation, the feeling that one is sinking, or that everything is getting louder. Fainting may also occur without warning, in which case it is known as a drop attack. A “funny turn” or “turn” is a colloquial term used by patients to describe an event involving a sudden change of consciousness, without loss of consciousness. A funny turn can refer to a wide variety of subjective experiences, including sudden giddiness and loss of balance, disturbed proprioception and spatial disorientation, feeling on the edge of losing consciousness or of suddenly sinking, dimming or tunnel vision, a sense of waves of energy rushing up from the abdomen, sudden transitory weakness of the muscles and limbs or transient amnesia.

Fainting (also known as syncope) in Chinese medicine is known as jué zhèng 厥证 and was first mentioned in Simple Questions (Huang Di Nei Jing Su Wen), Chapter 45, where two types, hot and cold, are described. The analysis and management described in the Su Wen focused on acute care and restoration of consciousness. In modern practice, unconscious patients are managed with appropriate first aid, and our treatment is aimed at correction of the underlying pathology.

Fainting can be distinguished from other conditions that may be associated with sudden loss of consciousness such as wind stroke, by the absence of sequelae. Epilepsy (diān xián 癫痫, Clinical Handbook, Vol. 1) can cause disturbances of consciousness, and in absence of the typical tonic clonic seizure, can look like a faint or funny turn. Atypical or partial seizures are often associated with phlegm and can be analyzed according to the patterns described in this chapter. 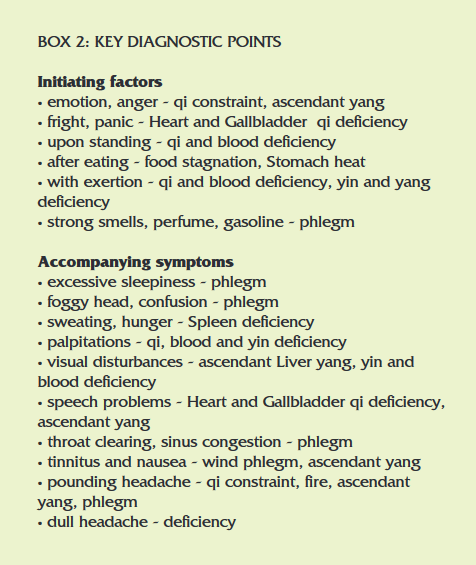 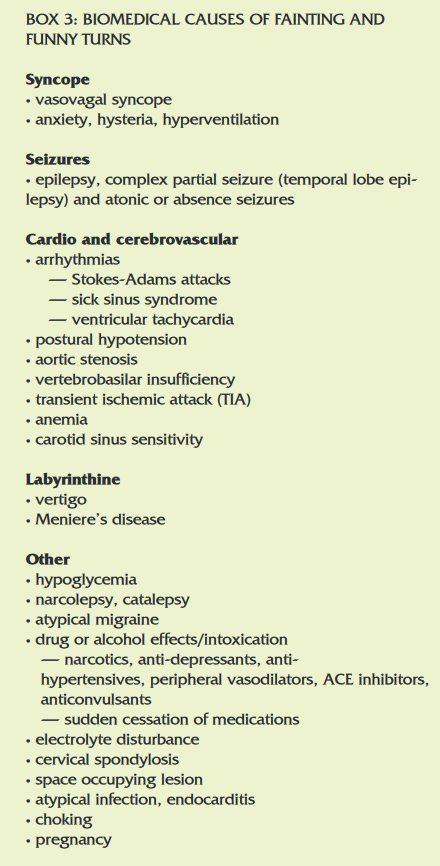 Emotional factors that can result in fainting or funny turns are those that impact on the shen and other anima (from the latin meaning mind or soul), and influence the functions of the internal organ systems, especially the Liver, Spleen and Heart. The anima can be congenitally unstable due to prenatal jing deficiency, maternal illness or trauma during gestation or delivery. The anima can also be destabilized by acquired deficiency of blood and yin.

Repression of emotion and excessive worry constrain Liver and Spleen qi and disrupt the qi dynamic. This in turn leads to pent up qi, Spleen deficiency, weakness of qi and blood, the creation of damp and phlegm, or the generation of heat. Persistent heat will damage yin and contribute to ascendant yang.

An inadequate diet, especially one lacking in protein can lead to blood deficiency, a common cause of fainting and turns. An erratic diet, or one biased towards raw or sweet foods, will weaken the Spleen and create damp and phlegm, as will repeated courses of antibiotics and other cold natured or Spleen weakening medications, such as Metformin (Box 4). An overly rich, sweet or fatty diet can lead to phlegm, while a heating diet and alcohol promote ascendant yang and fire.

Chronic illness, extended periods of overwork, lack of sleep and any excessive demand on qi and blood, or yin and yang, can lead to deficiency. Any factors that deplete the Kidneys, Heart or Spleen can predispose to fainting or turns. Working excessively long hours or laboring to the point of exhaustion can deplete Spleen and Kidney yang qi. Any activity that excessively taxes the Spleen will lead to qi and blood deficiency and may lead to the generation of phlegm damp. The Spleen is weakened by excessive, concentrated mental activity and sedentary habits. Lack of sleep depletes yin. Heart qi and yin are depleted by profuse sweating or other fluid loss, as well as an excessively busy and hectic life with insufficient rest.

A traumatic injury to the head can cause disturbances of consciousness and fainting. In acute cases, it is an alarming sign suggesting bleeding in the brain, a medical emergency. In less dramatic cases, the fainting or turns occur sporadically for some time following the initial injury. The trauma can cause blood stasis which disrupts the local circulation of qi and blood in the head, or may disrupt the Heart-Kidney axis and destabilize the anima. Physical trauma to the body resulting in severe pain can lead to loss of consciousness and shock. A sudden blood loss can lead to fainting.

Acute invasion of summer heat can cause sudden fainting or collapse. This is a seasonal pathology, and occurs as a one off event, not requiring any specific treatment other than standard first aid and rehydration.

A detailed history and thorough physical examination is essential. All current and previous medications, drugs and alcohol intake should be noted. The questioning around the actual episode or episodes should focus on three phases:

routine, the physical examination should include assessment of the neck, with particular attention paid to the sternocleidomastoid muscles, and cervical spine. A careful cardiovascular and cerebrovascular assessment should be made, with particular attention paid to the carotid arteries. A standing and seated blood pressure measurement should be performed.

If a person collapses or has a blackout, the treatment during the unconscious state is standard first aid; maintenance of the airway, breathing and circulation. Paramedic assistance should be sought. There are some acupuncture and acupressure techniques that can be of assistance (Box 4).

Patients present to Chinese medicine practitioners in between episodes. Our role is to deal with the constitutional pathology underlying the episodes, thereby preventing them, or at least making them less frequent and more manageable.

Continued in Part II: Detailed Pattern Differentiation and Treatment Protocols- in the July 2012 edition of the Mayway Mailer. 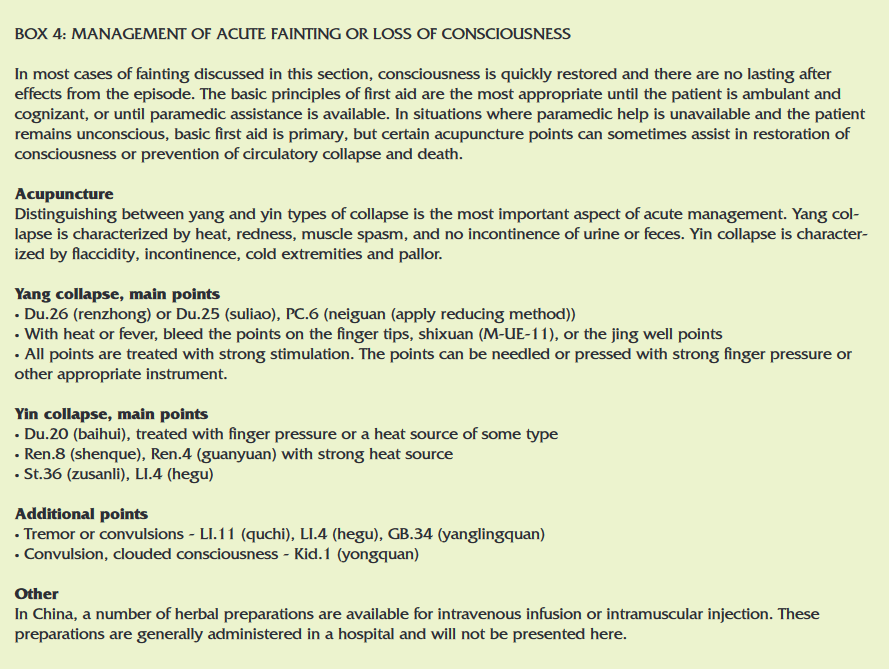 BIO: Will Maclean has been in full time practice since 1987 and is the author, along with Jane Lyttleton, of the Clinical Handbook of Internal Medicine series (Volume 3 was just released in May 2010), and the Clinical Manual of Chinese Herbal Patent Medicines. He has taught seminars in Australia, New Zealand, the US, UK and South Africa. His main clinical interests are in disorders of the immune and gastrointestinal systems, and in the critical assessment of the classics based on the practical realities of modern clinical practice.