Protect them with Jade Windscreen

Protect them with Jade Windscreen

For countless generations, Jade Windscreen Powder (Yu Ping Feng San) has been utilized to address surface deficiency patterns that lead to spontaneous perspiration, aversion to wind, and frequent invasions of common pathogenic influences. These complaints are the result of surface deficiency due to deficient or unregulated Wei Qi. The etiology of Wei Qi deficiency are manifold and determined by a comprehensive differential diagnosis. The most common causes of deficient Wei Qi include Lung, Spleen and Kidney deficiency patterns.

The Lung governs the surface of the body, spreading proper movement of the Wei Qi i to regulate opening and closing of the pores, and ensuring the healthy flow of Qi and blood to the skin’s surface. When the Wei Qi is insufficient, the pores do not close correctly, and the skin is not sufficiently warmed and consolidated. The body’s surface can then become vulnerable to the penetration of external environmental pathogenic influences. 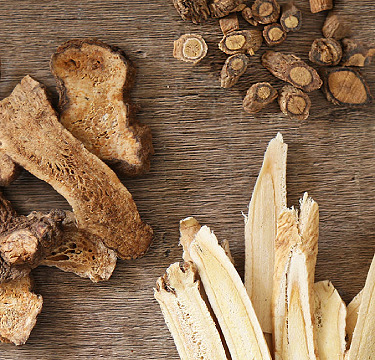 When the above clinical picture presents itself, Yu Ping Feng San is quite often the best first choice to treat surface deficiency pictures. Once the surface is warmed and properly regulated, the practitioner should then determine and rectify the underlying cause of the Wei Qi deficiency.

The original dosages for Yu Ping Feng San in Essential Teachings of Zhu Dan-Xi were 1:1:1 for Huang Qi, Bai Zhu and Fang Feng. At that time, Yu Ping Feng San was sometimes used as a substitute for Gui Zhi Tang! However, current dosages of 2:2:1 for this formula are far more common in modern applications to treat surface deficiency, deficiency type spontaneous perspiration, and external invasion of wind pathogens.

Huang Qi as the chief herb powerfully tonifies the Spleen Qi, raises the Yang, and enters the exterior to firm up the Wei Qi. The deputy herb Bai Zhu strengthens the Spleen Qi, warms and benefits digestion, stabilizes the exterior and stops spontaneous perspiration. As the assistant, Fang Feng warms and circulates qi and blood out to the surface, regulates the exterior, and expels wind. Fang Feng has a unique and special nature, and its actions on the surface are determined by the other herbs it is combined with. For wind-cold patterns it is often used with Jing Jie to release the surface and initiate perspiration. When used in Yu Ping Fang San with Huang Qi and Bai Zhu, Fang Feng firms and closes the exterior. The name Fang Feng translates from Chinese as "guard against wind”. Fundamentally, Fang Feng acts to either open or close the surface, depending on the patient’s condition and the other herbs with which it is combined. It is said that Fang Feng stabilizes the exterior without trapping pathogenic influences, yet also gently expels external pathogens from the surface without weakening the Qi.

Recently, due to the efficacy of this herbal formula in preventing common colds, flus, and lung complaints, Yu Ping Feng San has garnered interest from the medical and research community.

In another published study, researchers showed that administration of Yu Ping Feng San effectively alleviated injury to the lung and suppressed the release of pro-inflammatory cytokines and collagen deposition in COPD subjects. Yu Ping Feng San also was shown to significantly reduce inflammatory response in the COPD animal study subjects.

In a third study, also published by the Hong Kong University of Science and Technology, it was demonstrated that Yu Ping Feng San stimulates a bi-directional immune-modulatory role in the release of cytokines from macrophages. Additionally, Yu Ping Feng San was shown to up-regulate the phagocytic activity of macrophages.

So, what does this mean for TCM practitioners? In addition to Yu Ping Feng San's traditionally understood functions, this formula has demonstrated the ability to increase anti-viral and anti-bacterial activity of the immune system, suppress viral replication in mucus membranes, and regulate and reduce inflammatory processes in the upper respiratory tract and the lung.

When might it be especially useful to recommend Yu Ping Feng San to patients? Here are some suggestions:

If appropriate, Yu Ping Feng San can be combined with Yin Qiao San to enhance prevention of an external invasion of wind heat toxin, or with other constitutional formulas to address underlying root causes of a patient's surface deficiency condition.

Although practitioners should rely on their own expertise and clinical experience, a common recommendation is to prescribe the standard dose daily for a period of two weeks to a month in the Fall and Spring.

Contraindication: This formula is contraindicated for external excess patterns. The formula's primary function is to prevent exterior pathogenic qi from entering through the surface, not to expel external pathogens once they have lodged in the exterior.