Legend of the White Phoenix

The Chinese phoenix/feng huang (鳳凰) is a symbol of joy and peace believed to appear only during times of harmony and prosperity. She represents the power sent from the heavens to the Empress and favors leaders who are just and without corruption. If a phoenix is used to decorate a house, it signifies that the people who live there are loyal and honest. She is the Yin equivalent of the dragon and is often depicted together with the dragon to symbolize the happy, harmonious union of Yin and Yang. She is one of the four central Chinese mythical creatures.

The phoenix also represents regeneration and immortality. It is said that the Immortals would eat the eggs of the phoenix to attain longevity and everlasting life. In Chinese folklore, there is a story that the celestial, Lu Dongbing, made pills of immortality on Tiger-nose Peak in the 9th century. On the day when the pills of immortality were successfully made, Lu Dongbing invited other celestial beings to the celebration party. While the celestial beings were drinking wine, a pair of wild chickens flew from the forest into the pill-making pool and ate the pills of immortality. The chickens then became a pair of white phoenix. Lu Dongbing was displeased by this and reported it to the Bodhisattva Guanyin, but she smiled and said: “It’s a good opportunity for them to live on earth.” The Bodhisattva then pointed at Tiger-nose Peak, and the white phoenix immediately transformed into a pair of silky black chickens.

The silkie black chicken of this legend is particularly associated with black chicken/Wu ji, known in the West as the Silkie Bantam. In the West it was given the name “silkie” because of the soft appearance of its feathers. This species of chicken has black colored bones, dark flesh, and black skin. Black chickens can have feathers in a variety of colors, but the ones with white feathers are preferred in Chinese culinary and medicinal traditions. This is probably due in part to legend, as well as Chinese mythology, where the phoenix is traditionally believed to have white feathers.

For practitioners of Chinese medicine, the black interior and paradoxical white feathered exterior possess further meaning. They represent and mirror the consolidation of Yin and Yang. Thus, black chicken is considered especially valuable medicinally and nutritionally. In Chinese dietary therapy all black foods are considered to be very helpful for treating Kidney disharmonies and the Blood, because black is the color associated with water and with the Kidneys in the five phases/ wu xing.

According to western nutrition theory the black color in both animal and plant foods (such as black beans and blackberries) is thought to come from a group of antioxidants called anthocyanins. These flavonoids are thought to have positive influences on a variety of health conditions and to have a wide range of biological activities.

Black chicken is used in China both as a food and medicine for nourishing the Yin and the Blood. Its taste is sweet and its temperature is neutral. The channels it enters are Liver, Kidney and Lung. Its functions are: 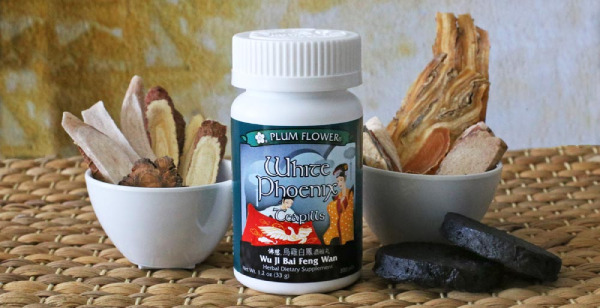 Many practitioners also use black chicken in both dietary and medicinal therapies to nourish Jing.

Wu Ji Bai Feng Wan is widely considered to be a well-balanced formula that is able to strongly supplement the body (Qi, Blood and Yin) without causing stagnation, as well as warm the Yang without producing dryness3. It is very popular in China and is customarily taken by women following menstruation to rebuild Blood and Qi, and to keep the skin healthy and supple by nourishing the Blood4. Almost one third of the formula is made up of thick, nourishing substances (Wu ji, Lu jiao jiao, Lu jiao shuang, Bie jia) that can deeply tonify Yin, Blood and Jing while supporting the Yang. In the TCM herbal realm Wu Ji Bai Feng Wan holds a secure place among the Fu Ke formulas for addressing a wide variety of women’s health issues.

Wu ji is the chief ingredient and monarch of this highly nourishing formula. Although the formula contains twenty ingredients, because of its unique nurturing abilities, Wu ji comprises the first 25% of the formula. It is combined with a many Blood and Kidney tonics to augment and complement its potency.

Alisa Wrinkle, L.Ac. was an herbal consultant with Mayway for 15 years. In the course of her tenure at Mayway she contributed to a wide range of projects including teaching, writing and marketing. She assisted practitioners from around the country with herbal concerns and advised on product selection. Alisa is a licensed acupuncturist and herbalist specializing in pain management, women’s health, and immunity. She has been practicing TCM in Oakland, CA. since 1997.