Letter From a Customer Regarding Gluten

Recently a customer contacted me with a question about gluten. Investigations subsequent to the customer’s question led to a clarification in regard to products previously thought to contain gluten because they were thought to be processed with huang jiu (yellow wine) made from barley. This is in fact not the case.

You ask an excellent question. You stipulate that our Shu di huang (Rehmania glutinosa root- prepared) is not traditional looking. The appearance of our Shu di huang has nothing to do with the gluten aspect of the herb, the round appearance has everything to do with the way the Sheng di huang (Rehmania glutinosa root– raw) is sliced and dried during the process of turning it into Shu di huang. Over time our processing facility has developed proprietary methods for drying and slicing that may differ slightly from other versions in the market place. These new methods are the results of finding ways to cut herbs so that preservatives are not necessary in our Plum Flower® Premier Quality Herbs. 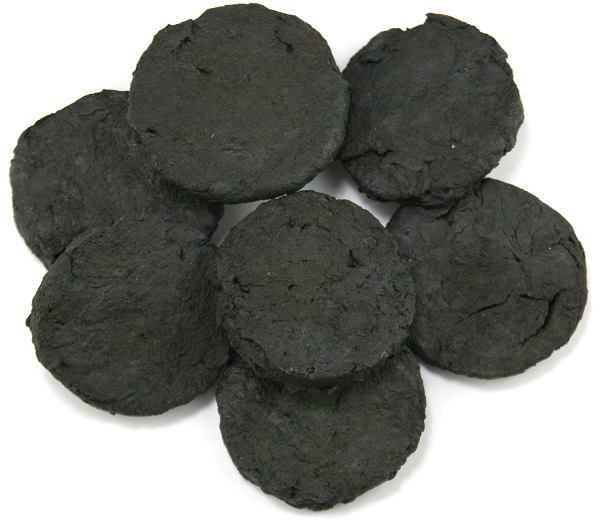 Also, I would like to assure you that our Shu di huang is very much processed in a traditional way. Our processing facility, Mayway Hebei in Anguo, China, currently uses the 2010 Chinese language edition of the Pharmacopoeia of the People’s Republic of China (PPRC) as their guide for how herbs should be identified, tested and processed. At the time the current batch of Shu di huang was processed (in 2009) the 2005 edition was still in use. A quick look at the 2005 English language edition of the PRC indicates that there are two methods that are allowed for making Shu di huang. A stewing method and a steaming method. Mayway Hebei uses the steaming method for processing our Shu di huang. The PPRC stipulates that this process is as follows:

(2) Steam the Radix Rehmanniae as described under the method for steaming (Appendix II D) until it becomes blackish and shiny, take out, dry in the sun to be eighty percent dried, cut into thick slices or pieces, and dry thoroughly.

Method (5) Steaming: Add the liquid excipient to the clean crude drugs [herbs] according to the stipulation as described under the individual monograph, mix thoroughly (except simple steaming). Place the mixture into a suitable container, steam thoroughly or appropriately, take out and dry.

Now this seems clear enough so one wonders where this gluten warning might come from on our Shu di huang. This becomes more clear when you look at the Chinese language edition of the 2005 PPRC (The 2010 Chinese language edition lacks Method (9) details). In the 2005 Chinese language version (used as a guide for the most current batch of Shu di huang) all instructions are the same EXCEPT, where it says use yellow rice wine in the English edition it just says 用黄酒 (yòng húang jiŭ – Use yellow wine). It is not stated that this huang jiu has to be rice wine.

A quick look at Wikipedia under Chinese alcoholic beverages for curiosity’s sake displays the following: http://en.wikipedia.org/wiki/Chinese_alcoholic_beverages

Main article: HuangjiuHuangjiu (Chinese: 黄酒; pinyin: huáng jiǔ, lit. “yellow liquor”), are fermented alcoholic beverages brewed directly from grains such as rice or wheat. Such liquors contain less than 20% alcohol, due to the inhibition of ethanol fermentation at this concentration. These wines are traditionally pasteurized, aged, and filtered before their final bottling for sale to consumers. Huangjiu can also be distilled to produce baijiu (see below).

Huangjiu are classified based on several factors. Among them are the liquor’s dryness, the starter used in its production, and its production method. The term huangjiu is often used as a generic term for all the Chinese fermented alcoholic beverages, but some varieties of Chinese fermented beverage are named separately, and not considered to be varieties of huangjiu; these include choujiu (made from glutinous rice) and Qingke jiu (made from Tibetan highland barley). While the primary ingredient used to produce huangjiu is rice, the main ingredient of choujiu is glutinous rice.

As you can see from this section of the Wiki page, it is possible that huang jiu could be made from wheat or barley but most of the time the primary ingredient used to produce huang jiu is rice.

To dig further I spoke to one of our Quality Assurance staff members. She said that in the past she had previously asked the General Manager at Mayway Hebei about what is used for huang jiu in their processing facility. She said that his response was that almost all of the time it is rice. I pressed her further and she said she thinks it is something around 98% of the time. This led me to ask her to check with Mayway Hebei about what specifically was used in the most recent batch. This is one of the advantages of having a GMP processing facility; all of this information will be tracked from batch to batch. Since I have only initiated this inquiry this morning, I do not yet have Mayway Hebei’s reply. I plan to forward you this information as soon it comes in and appropriate changes to our website and packages will follow if we indeed used rice wine instead of barley wine.

So where does the confusion come from? The most likely explanation is that it was thought that there was a possibility that previous batches of Shu di huang were processed with huang jiu that was made with barley. Then due to a misunderstanding of the US market place and valid concerns about gluten sensitivity, it was never communicated that the most recent batches were made with rice wine. This is something that we will rectify for all current and future batches, along with communicating the need/benefit for only selecting yellow RICE wine when using huang jiu.

I hope that this email helps to make it clear that our herbs are processed with both a mind to how something should be processed traditionally, while incorporating modern equipment and standardization. Mayway has a strong belief in the benefits of educating our customers about how our products are made. This process has meant an ongoing process of updating what we know (as distributors) about the methods used by our procuring and processing partners. I am sure that you can appreciate there is a vast field of knowledge when it comes to Chinese herbs and their processing. As we learn new details we try and pass those details on to you, our customers, so that you may have the most accurate information possible.

I believe that it is most likely that Yellow Rice Wine was in fact what was used in the processing of this herb. It is also important to understand that even if it was yellow barley or wheat wine that was used, we are talking about a very small amount of gluten protein that would be left as residue on the herb. This would possibly be an issue for those with celiac who are gluten intolerant, but would not likely be an issue for someone with a simple sensitivity. It would in no way be similar to eating a cookie or bread made with flour and would also not approach the levels of drinking a beer or the yellow barley wine itself. Again, once I have verified which huang jiu was in fact used to process our Shu di huang, I will get back to you with that information.

For an updated list of products that do contain gluten please click here. Or go to https://www.mayway.com/downloads/gluten.pdf

Bio: Teo Potts, L.Ac. has worked for Mayway Corporation as an Herbal Consultant since 2006. In this capacity he regularly assists acupuncturists, physicians, chiropractors and veterinarians from around the country with the selection of herbal formulas for their patients. Teo has a private practice in Emeryville, California, where he combines Chinese herbal medicine, acupuncture and massage. He specializes in pediatrics, pain, and dermatological conditions.