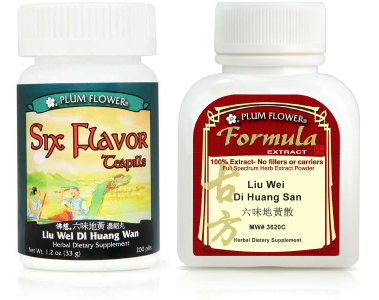 March is National Kidney Awareness Month, and while "kidney" means more than the physiological kidneys in TCM, we want to spotlight one of the most essential and popular kidney formulas in traditional Chinese Medicine: Liu Wei Di Huang Tang. This humble six-ingredient formula to tonify Liver & Kidney Yin, created by Qian Yi and recorded in his “Key to Therapeutics of Children's Diseases" 小儿药证直诀 around 900 years ago, forms the basis of a myriad of modifications. According to the folks at Lanzhou Foci (who make our Plum Flower® version), Liu Wei Di Huang Wan is the most popular classical TCM formula used in China today.

Tongue: Body may be red, tender, dry and even cracked; tongue coat may be very thin, geographic or no tongue coating at all. Pulse: thin, rapid, small

Dosage & Administration: The standard teapill dosage is 8 pills, 3 x day; extract powder formula 3 grams 3 times per day or 4.5 grams twice daily. Administer half an hour before eating for optimal digestion & absorption. In the initial phases, dosage may be increased to 8-12 teapills 3 times per day, then reduced to a maintenance dose as the formula takes effect. May be used medium to long-term for several weeks to several months. May be used over the course of several years as determined by the practitioner. Monitor for Spleen Qi deficiency. For weakened digestion with a tendency to dampness or phlegm, it may be administered with Bao He Wan/San or Xiang Sha Liu Jun Zi San/wan

Cautions & Contraindications: Contraindicated during early stages of acute illness such as cold or flu, and during acute infection. Use caution in patients with Spleen deficiency with a tendency for loose stools, diarrhea, poor appetite of chronic digestive weakness. Use with caution in cases of stagnation of phlegm or dampness.

Clinical Comments: This herbal formula is a modification of Zhang Zhong Jing's Kidney Qi Pill (Shèn Qì Wán). The author, the Song dynasty pediatrician Qian Yi, removed the interior warming herbs prepared Fu Zi and Gui Zhi, and substituted Shu Di Huang for Sheng Di Huang. These changes created an entirely new formula with very different indications. The original intent of the new formula was for the treatment of slow development in children. This pathology, considered a lack of thriving, was referred to as kidney timidity (shè qiè). It was not until the Ming dynasty that Liu Wei Di Huang Tang was seen as an essential treatment for kidney yin deficiency. Xue Ji, a well-known court physician, identified this formula as having the ability to "fortify water to control fire". This formula was eventually seen as a primary formula for nourishing the kidney yin, and has become, along with its many variations, one of the most widely used herbal formulas in Chinese medicine.

The primary goal of this formula is to nourish the yin substance of the Spleen, Liver and Kidney organs. When the yin of these organs is replete, the other symptoms and signs of the pathology will disappear.

The formula is a beautifully arranged combination of two groups of ingredients, with each group containing three herbs. The first group is made up of tonifying herbs, one each for the Liver, Spleen, and Kidney. The chief herb is Shu Di Huang, from the tonify blood category, which strongly nourishes the Kidney yin and essence. The formula's first deputy, Shan Zhu Yu, enters both the Liver and Kidney organs, nourishes the Liver, and helps consolidate the Kidney essence through its ability gather and consolidate. The third deputy is Shan Yao, which having a mild astringing quality, stabilizes the essence while also strengthening the Spleen. The proper functioning of the Spleen is essential in restoring Kidney essence as it is considered the source of all post-natal Qi.

The second group of three herbs, the assistants, provide a predominantly draining function in the formula. Fu Ling leaches dampness from the Spleen, while at the same time balancing the astringing nature of Shan Yao in order to prevent damp stagnation. This preserves the vitality of the Spleen as the primary organ responsible for nourishment of the body. Ze Xie, the second assistant, clears and drains overabundance of Kidney fire, while also preventing stagnation from the heavy moist quality of Shu Di Huang. Mu Dan Pi opens and cools the Liver to counter-balance the warming and astringing properties of Shan Zhu Yu.

The traditional functions of Liu Wei Di Huang Tang/Wan are to tonify the Liver and Kidney Yin, clear Yin deficiency heat, and secure the Jing-Essence. The clinical indications for this formula may include mild night sweats, periodic flushing, afternoon fever, thirst and dry mouth, dry skin, soreness and weakness of the low back and knees, light-headedness, mild dizziness, vertigo, fatigue and diminished endurance, insomnia, mental agitation, poor concentration, diminished hearing, ringing in the ears, poor vision, nocturnal emission in men and excessive discharge in women, difficult or frequent urination. In severe cases weight loss, excessive thirst, increased urination. The formula can also be used for slow development in children, or a lack of flourishing in children.

An important way of looking at this formula is to see that its overall function is to nourish the substance of the body, the Yin. One of the central tenants in TCM is that overwork first damages the Qi, and if not reduced, will eventually damage the Yin. In general terms, the pathological process leading to Yin deficiency is excessive physiological work leading to Qi, and if unabated, to Yin consumption. The precipitating causes can be of either of internal or external origin.

It is important to note that though this formula is used to treat broad based Yin deficiency, the practitioner must understand the formula's limitations. From Medical Lecture Notes of Qian-Zhai, the physician Qin Bo-Wei notes: The most important indication for Liu Wei Di Huang Tang is Kidney yin deficiency due to harm from exhaustion leading to patterns of emaciation. The literature also says it treats insufficiency of all three major Yin organs, Spleen, Liver and Kidney.... but when all is said and done, one must clearly see the main cause, the main organs involved, the main pattern, and make modifications according to the specific nature of the disorder. If one mistakenly assumes one can treat all yin deficiency patterns (in the same way), and treat them all with Liu Wei Di Huang Wan, one's success in the clinic will most definitely not be very high.