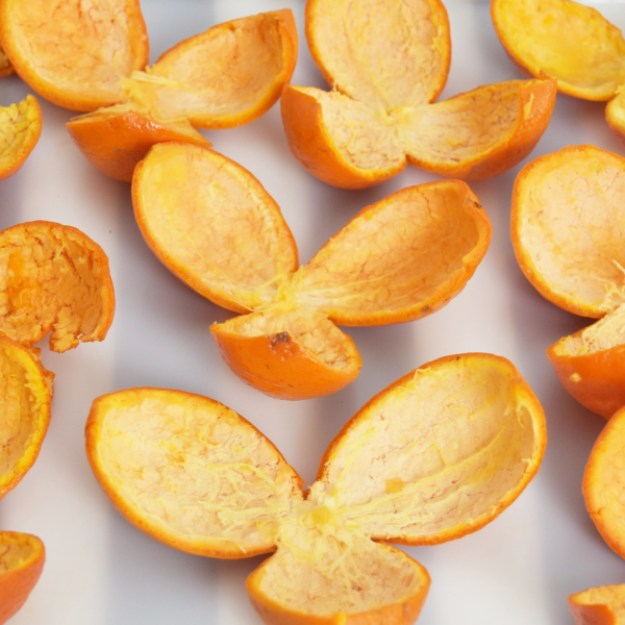 Chen pi (陈皮 chén pí) is an extremely important herb in the Materia Medica, as it is widely used to regulate and move the Middle Burner Qi, and for assistance in treating cough due to Dampness and Phlegm. It is obtained from the pericarp/peel of Citrus reticulata. The herb is acrid, bitter, warm and aromatic, entering the Lung, Spleen, and Stomach channels. In addition to its use in herbal medicine, Chen pi can be a culinary ingredient in some soups, Chinese dishes (like Chen Pi Duck), and candied/salted for clearing phlegm from the throat, alleviating nausea, and aiding digestion.

Unfortunately, Mayway has been unable to replenish stock of Chen pi since 2016. The reason that we currently cannot stock Chen Pi is because citrus fruits attract a large number of pests and are a very valuable agricultural commodity, thus, throughout the world (including the US), they are highly treated with pesticides. The United States FDA issued an Import Alert in 2011 for pesticide contamination, and since then the herb has been subject to “Detention without Examination.” This means that the importer must pay for and prove there are no pesticides present before the herb can be imported, which is a challenge that our suppliers have not been able to overcome.

One way to circumvent this issue is to make your own Chen pi from organic Mandarin oranges, as taught to me by my herb teacher from my master’s degree program. I have been making this since the early 1990s and consequently, I have some personal inventory that, at this point, more than qualifies for the venerable (and valuable) 10-year-old, aged Chen pi, since the higher the age of the dried peel, the greater the efficacy value of the herb.

The character “chén” literally means “aged” and typically commercially available Chen pi is aged for at least one year, better quality is aged for three years, and the finest grade is 10 years old (or more). The most highly prized Chen pi comes from Xinhui, Guangdong in southern China, which is known as Guang Chenpi (or chachi/ chazhi). Other varieties mentioned in the Pharmacopoeia of the People’s Republic of China (PPRC) include Dahong-pao, Unshiu, and Tangerina.

Research has demonstrated that each of these varieties of Citrus reticulata contains nearly the same levels of marker chemicals including hesperidin, which is a flavanone glycoside ketone (aka a bioflavonoid) found in the white inner layer of citrus fruit, and DNA bar-coding is required to differentiate the varieties. Hesperidin, alone or in combination with other citrus bioflavonoids (such as diosmin), is most commonly suggested for blood vessel conditions such as hemorrhoids, varicose veins, and poor circulation (due to venous stasis).

The biggest difference between aged ten-year tangerine peel, aged three-year, and ordinary tangerine peel is that the aged tangerine peel will possess higher levels of nutrients and efficacy values. The main chemical components of Xinhui tangerine peel are volatile oils and flavonoids. Flavonoids are frequently found in fruit, vegetables and cereals. Flavonoids are aromatic secondary plant metabolites, which have been recognized in vitro as possibly important due to their physiological and pharmacological role and their health benefits. Flavonoids show a strong antioxidant and radical scavenging activity, and they also exhibit antiviral, antimicrobial, and anti-inflammatory activities, beneficial effects on capillary fragility, an ability to inhibit human platelet aggregation, antiulcer, and antiallergenic properties. During the aging process, the volatile oils are greatly diminished, and the flavonoids are concentrated.

Given the price differences, it is important to distinguish the actual age of Chen pi. There are four characteristics to look for. First, the surface of the outer skin (epidermis) in aged Chen pi should show bumps and bristle patterns. Younger Chen pi shows a smooth surface, and the color is uniform. Some sources soak the peel in black tea to darken the peel to mimic the effects of aging, and the peel may be bluish if the peel was dried at high temperature. There are counterfeit examples of Chen pi on the market, which can be identified by an inner capsule that is too thick, tight, and yellow in color with some reddish tint. With true Chen pi, the inner capsule will easily flake off and is yellow and dark white. 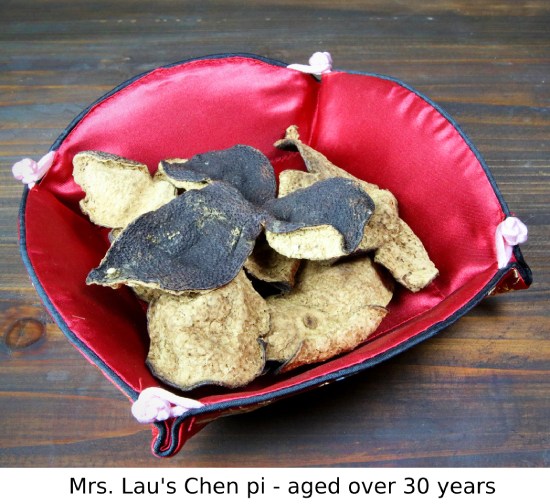 In terms of Odor/Smell 氣味 qì wèi, the counterfeit Chen pi smells only of fresh citrus, while true aged tangerine peel has three discernable odors: stale/old (chén 陳), fragrant (Xiāng 香), and alcoholic (Chún 醇). Finally, when soaked in water, the “tea” formed with fake Chen pi quickly becomes dark in color, slightly cloudy, and the taste is sour, astringent, and bitter without any discernable spiciness. The tea formed using true Chen pi is light, clear, and slightly brown. The taste is “old”, mellow, smooth, and only slightly bitter, but without sourness and astringency.

However, since the Chen pi from China is likely laden with pesticides, one must look for a source that is organically grown. There are literally scores of varieties and hybrids grown all over world. In fact, 41% of the citrus fruit grown in the US is mandarin oranges/tangerines.

How to Make Chen Pi at Home

Common names for Citrus reticulata include tangerine, Mandarin orange, Unshu orange, Temple orange, and US brands found regionally such as Clementines, Cuties, Halos, and Fremont, Cleopatra, and Gold Nugget Mandarins. For this article, I obtained certified organic Fremont Mandarin oranges. The color of various mandarins varies from yellow orange to orange to reddish orange, which are considered to be superior.

The oven referred to in the PPRC monograph is not a kitchen oven, but a commercial drying oven designed for this purpose. It is possible to use your kitchen oven. Use of an oven will provide protection from elements such as moisture and insects. Watch for signs that the temperature may be too high by looking for a bluish color on the peels.

With this current batch, I used a food dehydrator which I also have used to dry apples and plums from the trees in my yard.

After drying, the peels will be crisp and non-pliable. Then, they are placed into a glass jar with a tight-fitting lid. The jar is dated and then stored in a cool, dark place (I use my basement) for aging. From time to time, the peels should be checked for mold or insect infestation. Unfortunately, some molds that grow on improperly stored Chen pi may produce aflatoxins.

In conclusion, I strongly recommend making your own Chen pi from organic tangerines/mandarins, particularly since commercially available Chen pi is likely to be “fake” or pesticide-laden. I suggest making a batch every year. It is quite easy to do, and your patience will be rewarded.