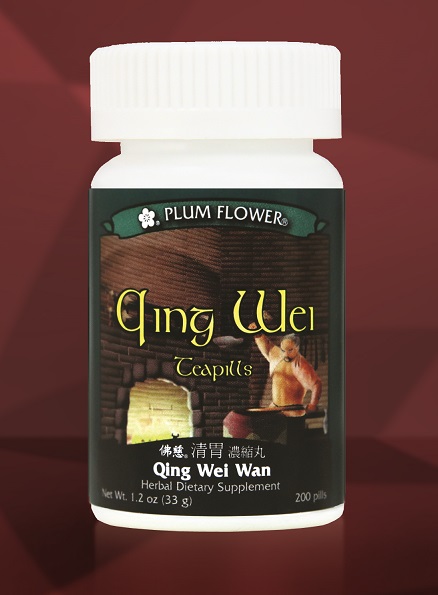 Presentation: Occasional mouth sores, especially concentrated on the gums and buccal cavity, but may also include sores on the tongue, lips or jaw, bad breath, dry mouth and lips, occasional toothache and occasional frontal headache. May be initiated or exacerbated by excessive consumption of spicy, greasy, hot-natured foods, and areas of discomfort worsened by the topical application of heat and relieved by cold. May be accompanied by red complexion, frequent or indeterminate gnawing hunger, thirst for cold drinks, occasional belching or heartburn, tendency towards slow or dry stools.

Tongue: red, redder in the center, with a dry, yellow coat or a scanty coat

Dosage & Administration: The standard dosage is 8 pills, 3 x day. Administer half an hour before eating for optimal digestion & absorption, or in between meals with an empty stomach. In the initial phases, dosage may be increased to 8-12 pills 3 times per day, then reduced to a maintenance dose as the formula takes effect. May be used long-term for several weeks to several months. May be used over the course of several years.

Cautions & Contraindications: Use with caution during pregnancy. Contraindicated for conditions without heat, or due to deficient heat. Not appropriate for Kidney deficiency or attack of pathogenic cold causing tooth and gum issues.

Clinical Comments: Qing Wei San was written by Li Dongyuan and published in his classic formula book, Lan Shi Mi Cang/Secrets from the Orchid Chamber, in 1336 A.D. Qing Wei San is indicated for Stomach heat and fire causing occasional toothache, and occasional mouth sores on the tongue and lips.

The Stomach Yangming channel is abundant with Qi and Blood which rises to nourish the head, especially the mouth and teeth. In this pattern, excess heat accumulates in the Stomach channel until it blocks the flow of Qi and eventually gives rise to fire. Stomach fire then rebels upwards to attack the head, particularly the mouth and teeth that the channel runs through. This causes the primary symptoms of occasional toothache that may lead to headache, occasional mouth and tongue sores, dry mouth and lips, and bad breath.

Li Dongyuan attributed this condition to the excessive consumption of hot, tonic herbs, which cause a build-up of Stomach heat. In the modern clinic, we may also see this condition arise due to some combination of overeating, late-night meals, excessive consumption of spicy, heavy, fried, greasy, or oily foods, excessive or unexpressed frustration, anger and stress, and a sedentary lifestyle, resulting in the build-up of Stomach heat.

The chief herb, Huang lian strongly cools and quells Stomach fire, drains the heat from the channel, and clears heat-toxins to deal with the root problem. The deputy, Sheng ma raises and disperses heat and clears heat-toxins from the Yangming channel. Sheng ma works with Huang lian to clear the heat and heat-toxins while also reinforcing the Qi dynamic to ensure that the pure Qi can rise and the turbid Qi can descend, without excessive movement either up (from Sheng ma) or down (from Huang lian). This elegant balance enables the formula to both drain and disperse Stomach fire without harming the Qi dynamic or allowing the excessive rising of pure Qi to fan the flames of the fire. Sheng ma also acts as the envoy to raise the formulas’ focus to the face and mouth. Stomach fire directly damages the Yin and Blood and can attack the collaterals of the Stomach channel running through the gums. Mu dan pi and Sheng di huang work together to cool the Blood and nourish the Yin, and with Dang gui to strongly nourish the Blood, invigorate the flow of Blood to disperse swelling, and alleviate discomfort. Together, the herbs in this formula clear the Stomach heat and cool the Blood, allowing the fire in the upper body to descend and disperse, and protect the Yin and Blood from further damage.