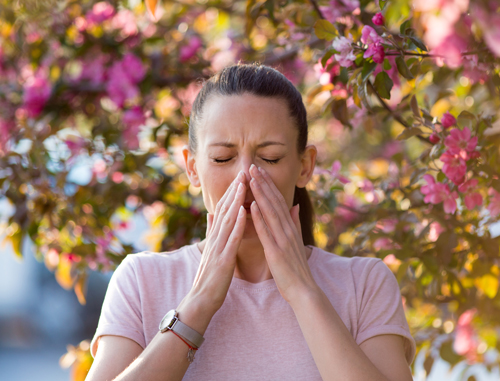 This article is an excerpt from the Clinical Handbook of Internal Medicine: The Treatment of Disease with Traditional Chinese Medicine, Volume 1 by Will Maclean and Jane Lyttleton. While the book also contains sections that discuss herb and formula recommendations, for compliance reasons those sections cannot be presented by Mayway. Please see the book for this information.

Rhinitis is a seasonal or perennial disorder characterized by episodes of nasal congestion, watery discharge, sneezing and irritation of the conjunctiva, throat and ala nasi. It is due to hypersensitivity of the nasal mucosa to pollen, dust mites, fungal spores, animal dander and saliva, fumes, and certain food substances.

When rhinitis occurs in response to allergens like grasses and pollens, which have a limited seasonal distribution, I referred to it as seasonal allergic rhinitis, or hay fever. In between episodes of hay fever, patients are usually asymptomatic. The main features are frequent attacks of sneezing with profuse watery nasal discharge and nasal obstruction. The attacks usually last a few hours and can be accompanied by sore watery eyes.

Perennial rhinitis can occur at any time of the year in response to exposure of a variety of mostly non-seasonal allergens, like animal dander, house dust, fungal spores, and irritants like cold air, smoke and perfume. Perennial rhinitis may be intermittent or, in some cases, more or less continuous and in general the symptoms are less marked than those in seasonal allergic rhinitis. The main features of perennial rhinitis are low grade itching, irritation and congestion of the nose and eyes, with occasional exacerbations. Patients with rhinitis usually have swollen nasal mucous membranes, which can prevent sinus drainage, predisposing them to secondary infection and the development of sinusitis. The symptom picture of the sinusitis and rhinitis overlap somewhat, but sinusitis usually exhibits maxillary and supraorbital pain, and less sneezing and itching.

Rhinitis, whether seasonal or perennial, is usually an allergic condition. In TCM terms we relate this concept to deficiency of wei qi. The wei (or protective) qi has its basis in Kidney yang and is distributed by the lungs to all the surfaces of the body. This includes the mucous membranes of the nose and throat. If the functioning of wei qi at these surfaces is inadequate, then inappropriate responses to inhaled particles and gases can result, and the area will become irritated and inflamed, promoting mucus production and sneezing.

In a TCM context, the allergens that can trigger an episode of rhinitis are a form of external Wind. This Wind is able to invade the nose in the absence of an adequate defense by wei qi, and then remain there. The chronic itching and sneezing of rhinitis is due to the persistence of this external Wind in the mucous membranes of the nose. Uncharacteristically for Wind generally, this Wind can remain in the nose for months or years if the wei qi is too weak to expel it.

Lung qi deficiency will be found in individuals who are constitutionally qi deficient, have a history of chronic Lung disease or who have damaged Lung qi with inefficient or excessive exercise. Lung qi is also weakened by excessive or unexpressed sadness and grief. Those with weak Lung qi tend to have weak wei qi and will be vulnerable to invasion by and retention of external Wind.

Kidney deficiency develops from chronic illness, ageing, overwork, or is hereditary. When the Kidney weakness is constitutional, the symptoms of allergic disease often start in childhood. The role the Kidneys play in the aetiology of rhinitis is in the above mentioned role of being the foundation of all the body’s qi (zheng qi) of which wei qi is one aspect. Sometimes the wei qi deficiency is the only sign of Kidney deficiency.

Spleen function is usually damaged by bad eating habits and a diet of cold and Phlegm producing foods. The weakened Spleen function means more Damp and Phlegm accumulation and the rhinitis of this pattern will tend to generate more mucus than the others. Rhinitis that is triggered by fumes and cigarette smoke can fall into this category-it is the nature of strong smells to not only disperse qi and irritate mucous membranes, but to also mobilize Phlegm Damp.

There are two aspects to consider when treating rhinitis- treatment of the acute episodes, in which severe and debilitating symptoms need to be quickly controlled, and treatment between episodes. When symptoms are acute, herbal treatment may need to be administered twice or more per day and acupuncture at least daily. In all except the simple Wind Cold (Heat) category, the treatment should persist between episodes to build the constitution. This is especially important in the months before the hay fever season. Treatment of Lung, Kidney and Spleen type rhinitis can be achieved with herbal formulas (discussed in Will Maclean’s book referenced below) during and after acute episodes. Interestingly, in the Kidney deficient types of allergic rhinitis, there may be little in the way of the typical Kidney symptoms. Nevertheless the supposed Kidney yang deficiency (manifesting as wei qi deficiency) will always be addressed with the addition of a few Kidney yang tonic herbs.

A Wind Cold invasion is the most common presentation of an acute episode of rhinitis. Wind Cold invades the nose, obstructs the passage of normal Lung Fluids and irritates the mucous membranes.

If weak wei qi, (which is a subtype of Lung qi) does not nourish and protect the lining of the respiratory tract, inhaled particles may cause inappropriate responses causing sneezing and congestion. The deficiency of Lung and wei qi predisposes to frequent invasion by Wind.

Lung and Spleen qi deficiency with Phlegm is a common pattern occurring frequently in children (although it also occurs in adults) and in Western society is often due to excessive consumption of dairy products and sugar. The main feature here is the quantity and persistence of mucus.

Kidney deficiency is a very chronic pattern, often preset from childhood, and frequently encountered in atopic patients who may also be subject to asthma and eczema. It may also evolve from one of the previous patterns. Depending on constitutional and environmental factors, it may tend to yin or yang deficiency, with yang deficiency being clinically more common.

Bio: William Maclean, M.Sc Chin. Med. is an internationally renowned practitioner, teacher and author from Australia, with 25 years of clinical experience in the field of Chinese medicine. Will teaches in the Masters programs at the University of Sydney and University of Technology Sydney, and lectures to students and practitioners around the world. In addition to his long years in practice, Will is the author (with Jane Lyttleton) of the Clinical Handbook of Internal Medicine series Volumes 1, 2 and 3, the Clinical Manual of Chinese Herbal Patent Medicines, and the recently published Clinical Handbook of Chinese Herbs: Desk Reference. The next face to face course will be on Lingering Pathogens held in Canada in September 2013, and hopefully a class on Diabetes in the US that same month.