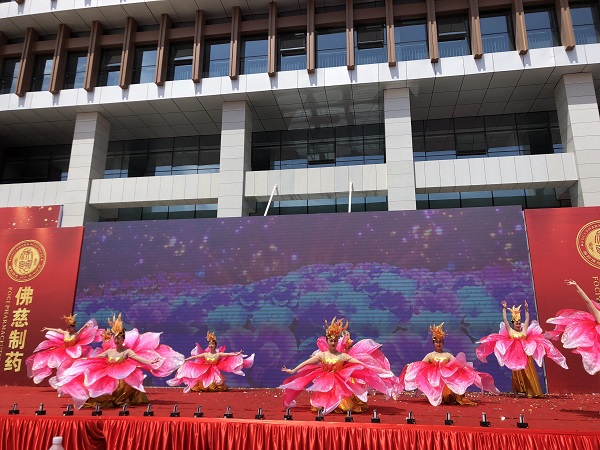 On June 22, fifty-foot tall red banners celebrated the transition to next level teapill manufacturing in Lanzhou. Lanzhou Foci, the maker of Min Shan® and most of our Plum Flower® teapills, reached another milestone in its nearly 90-year, storied history. My sister Eva, Mayway’s Vice President, brother Hugh, our Creative Director and I participated in the Opening Ceremony of its new 90 plus-acre campus and were treated to a VIP tour.

Lanzhou Foci had outgrown their old factory a decade ago, which was built in 1959 and located in Lanzhou’s city center, restricting expansion and making round-the-clock shifts necessary. Their new campus took over 3 years to build, and is comprised of multiple manufacturing workshops and warehouses, a huge staff canteen, gym, dormitories, and room to grow. The new campus is located in Lanzhou New Town, a burgeoning manufacturing hub 20 min. from the Lanzhou airport. 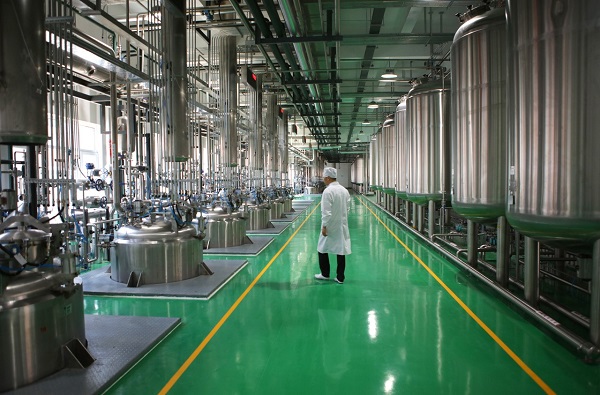 Quality and Efficiency Improvements
Their new manufacturing workshops offer state-of-the-art TCM production and improved production capacity supported by new technologies and equipment. Some examples are 26 brand new extractors that more efficiently capture essential oils and computerized and precisely controlled condensers, resulting in even better quality and efficacy. Crucially, the extraction and condensing processes are controlled at a console reminiscent of those in rocket launching movies, and programmed down to the minutes and seconds. Once operating at full capacity, the new factory will be able to produce an astounding 80 million pills a day!

Their central laboratory is also quite impressive with state-of-the-art testing equipment from Germany, Japan, and the U.S. and nifty machines like special climate-controlled cabinets to essentially speed up time for accelerated stability studies. Among their neat new testing equipment is a DNA analyzer. I knew it was for testing animal ingredients, but was surprised (then unsurprised) to learn that they were also planning to use it to test Chuan Bei Mu, whose high cost often leads to substitution or adulteration. 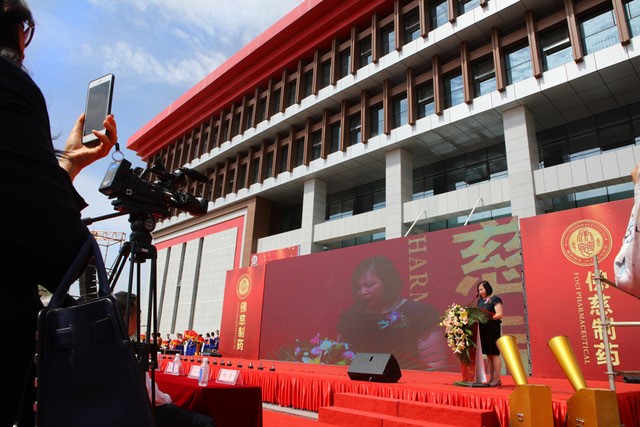 Celebrating Chinese Medicine
The Opening Ceremony was held on a gorgeous day with sunny, open blue skies and lots of thin, fresh air (over 6300 feet above sea level!). Red, 50-foot congratulatory banners, 600-plus guests, rousing speeches, lion dancers, taiko drumming, and regional dance performances set the celebratory mood. I was given the honor of speaking, representing Foci’s international distributors, and interviewed by the Xinhua News Agency.

We also renewed acquaintances and in some cases met for the first time other members of the Foci family. We’ve been proudly working with Lanzhou Foci since becoming their U.S. distributor in the 1980s, and really enjoyed hanging out with Foci’s 27 other international distributors at the celebration. 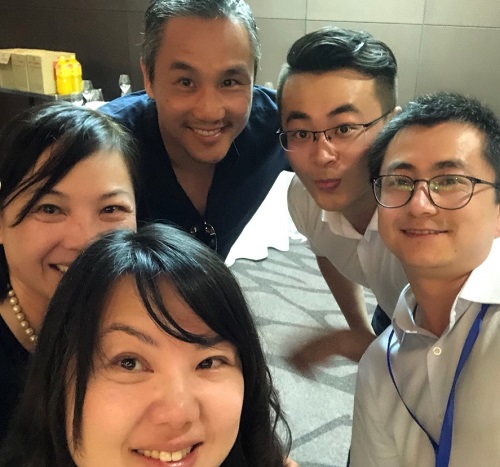 We chatted with Mr. Suzuki, whose father became Foci’s Japanese distributor in the 1930s, and Ms. Fang, who became Foci’s distributor for Brazil just this year. Over many, many cups of baijiu, we discussed regulatory and business challenges with the folks from Hong Kong, Vietnam, Thailand, Australia, and Italy. It’s always interesting to compare the attitudes of different countries about the status and value of Traditional Chinese medicine. Of the 29 countries where Lanzhou Foci products are found, the U.S. is the only one that doesn’t officially acknowledge TCM as medicines.

More Control Over Herb Quality and Supply
We were particularly impressed with a video of Foci’s 10,000 acre herb plantation in Zhangxian and Lintan counties, where they employ local farmers to grow 10 herbs and control everything from seed to bottle. 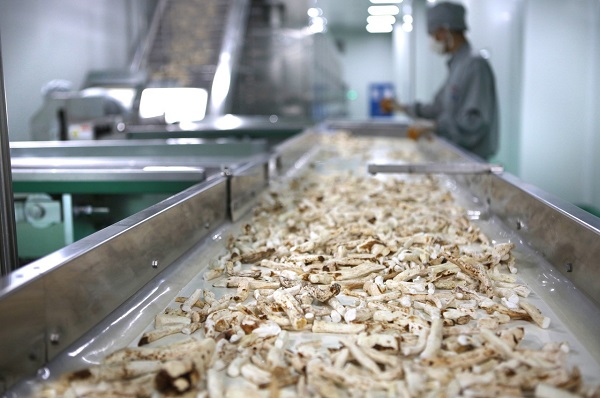 I had visited the Zhangxian plantation in 2014 when they had harvested their first crop of Dang gui, Huang qi, and Dang shen, and it was wonderful to see how they’ve expanded their growing and harvesting operations in the years since. Previously, all the herbs grown had been used in the manufacturing of their teapills, but by the end of the year they will be set up to sell the herbs they grow to other manufacturers and special customers such as Mayway. It's become more and more apparent to GMP factories that they need to grow their own herbs to ensure quality, especially when it comes to active ingredient content and the use of pesticides. As no single company could possibly grow all the herbs that are needed, the largest manufacturers have formed a network to sell the herbs they grow to each other to ensure quality, stability, and supply.

Eating Herbs
And of course, I can’t write about a trip to China without mentioning the food! We enjoyed delicious regional dishes such as boiled mutton and Lanzhou beef noodle soup, but especially the local herbs/vegetables, such as fresh Bai he stir-fried with Shan yao and Hei mu er, Shan zha pudding, and sweet Ju hua, Bai mu er, Gou qi zi, and Da zao soup. 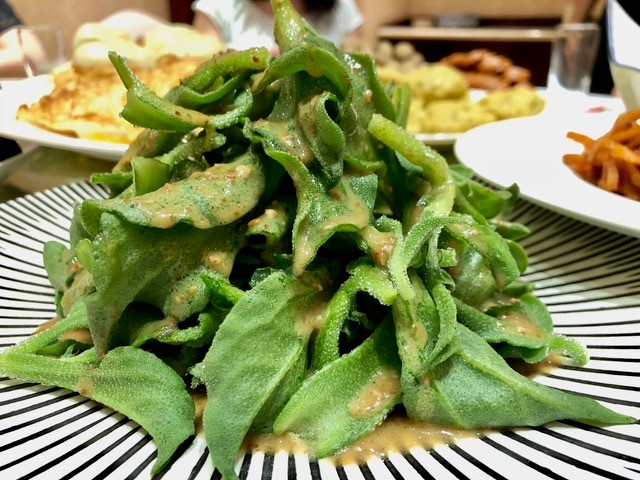 We were also served a new, trendy vegetable “San Qi Cai” 三七菜, and while not actually the same plant as San Qi/Tian Qi (Panax Notoginseng), it purportedly has similar benefits, including nourishing the heart, clearing toxins, and invigorating the blood. We enjoyed its fleshy, mild tasting leaves as a salad with a sesame/ginger dressing. Yum!

All in all, an especially fun and interesting visit, but our favorite moment had to be when we were surprised and delighted to see Mayway featured in a panel at their in-house museum, commemorating the signing of our joint-venture partnership in 1992, and complete with a life-sized photo of our mom!

After the event update: Foci received their official China GMP certification on July 4th, and production began in earnest soon after. We look forward to offering you even better quality products!