The Chinese Medicine Treatment of Cough 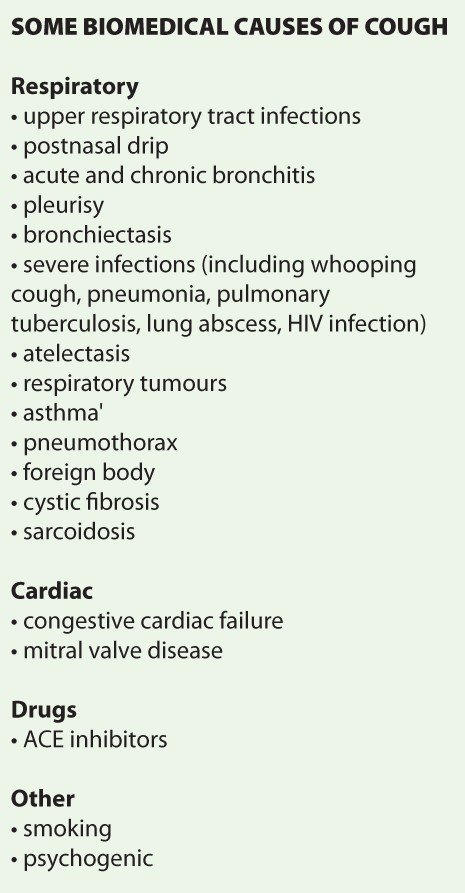 Excerpted from Will's new and expanded edition of the Clinical Handbook of Internal Medicine released in 2019.

Coughing, in the language of TCM, is simply a failure of the natural descent of Lung qi, or a rebellion of Lung qi upwards. There are two general mechanisms: Lung qi which is too weak to descend, and simply ‘floats’ upward or blockage of Lung qi’s downward movement by a pathogen.

The first mechanism is one of deficiency, associated with weakness of Lung qi or yin. One aspect of healthy Lung function is the descent of Lung qi (and Fluids) to the Kidneys for reprocessing. When Lung qi is too weak to descend properly, it simply 'floats' upwards. Yin deficiency can cause cough by drying Lung Fluids and generating deficient Heat, which rises, taking Lung qi with it.

The second mechanism is one of excess, and the result of obstruction to Lung qi by external pathogens like Wind, Cold or Heat, or by internally generated pathogens like Phlegm, Dampness, Heat, pathological fluids or stagnant qi. Excess cough may be acute or chronic. When associated with external pathogens the cough is usually acute, whereas Phlegm Damp coughs are often chronic. Excess type cough often has some deficiency at its root. For example the cough due to Spleen and Kidney yang deficiency occurs because of a failure of fluid metabolism - pathological fluids accumulate in the Lungs and obstruct Lung qi - a mixed excess and deficient pattern.

Any of the external pathogens, but particularly Wind, Cold, Heat and Dryness, can give rise to cough due to the relatively superficial and therefore vulnerable position of the Lungs. The Lungs are considered to be the 'delicate' organ, easily affected by environmental conditions. Entry to the Lungs may be through the nose and mouth, or through the skin (the Lungs and skin are closely related).

This refers to Lung qi or yin deficiency. The Lungs need a moist environment to function properly and are easily damaged by heat and dryness. Lung qi may be compromised by poor posture, shallow breathing and lack of exercise, or conversely by repeated or extreme physical overexertion. Prolonged or unexpressed grief or sadness can weaken Lung qi. If Spleen qi is deficient then Lung qi will not be supported via the generating (sheng生) cycle.

Lung yin can be damaged by dry hot environments, inhalation of heating substances like tobacco, inhaled steroids and bronchodilators, and as a secondary result of Kidney yin deficiency. 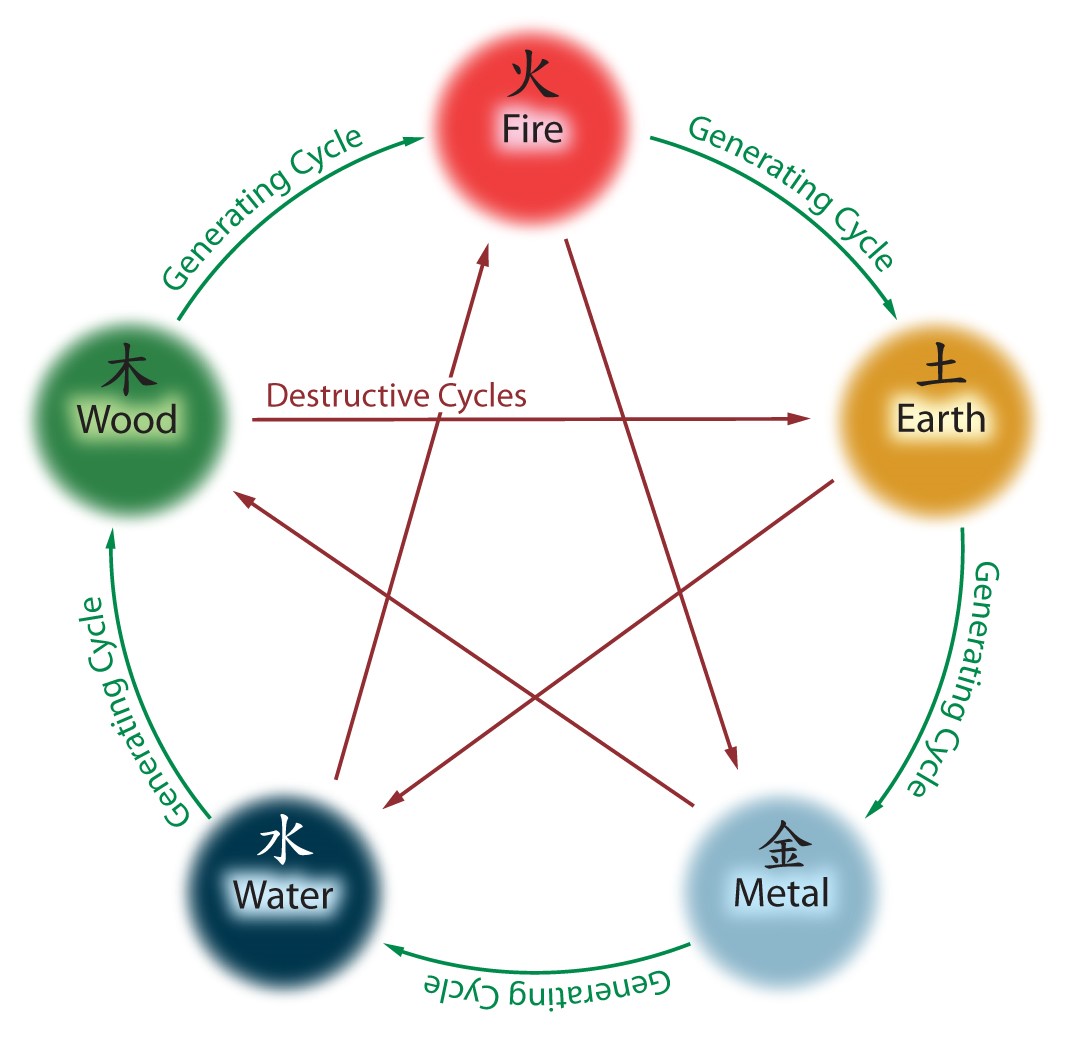 Overwork, excessive worry or mental activity, irregular dietary habits, excessive consumption of cold, raw, sweet or greasy foods or prolonged illness can weaken Spleen qi. Weakness of the Spleen can lead to the generation of Dampness, which over time may congeal into Phlegm. Once Phlegm is present, it can accumulate in the Lungs. TCM classics describe the Spleen as "the creator of Phlegm, the Lungs are the storehouse of Phlegm". Similarly, a primary Spleen weakness can lead to Lung weakness (due to the five phase generating [sheng 生] cycle relationship.) If the Lungs are chronically weak, they may fail to send the appropriate fluid portion to the Kidneys. These congested fluids may become Phlegm over time.

The Liver and the Lungs have a close relationship. According to the controlling (ke 克) cycle of five phase theory (see figure below), the Lungs restrain the Liver and prevent it from getting too 'strong'. When the Lungs are weak or the Liver too 'strong' (that is Liver qi is stagnant or there is some other excess pattern involving the Liver), then the controlling cycle breaks down and the pent up Liver energy rebels backwards - a reverse controlling cycle. The distinguishing feature of a Liver invading Lung cough is its relationship to stress or emotional disturbance.

Prolonged Liver qi stagnation can also contribute to the generation of Phlegm. This it does firstly by invading and weakening the Spleen, which then produces Dampness and Phlegm, and secondly by retarding movement and distribution of fluids which over time congeal into Phlegm.

Kidney function can influence respiration in several ways. The Kidney plays a role in respiration - it aids in the 'grasping' of qi. As Lung qi descends with a breath, the Kidney is said to anchor it. If the Kidney is weak this anchoring function is poor and the inspired qi floats upwards. Lung and Kidney yin have a close relationship. If Kidney yin is weak, or there is deficient Heat generated by yin deficiency, this can affect Lung yin - the Heat can dry up Lung yin, or the yin simply fails to be supported by the weakened Kidney. 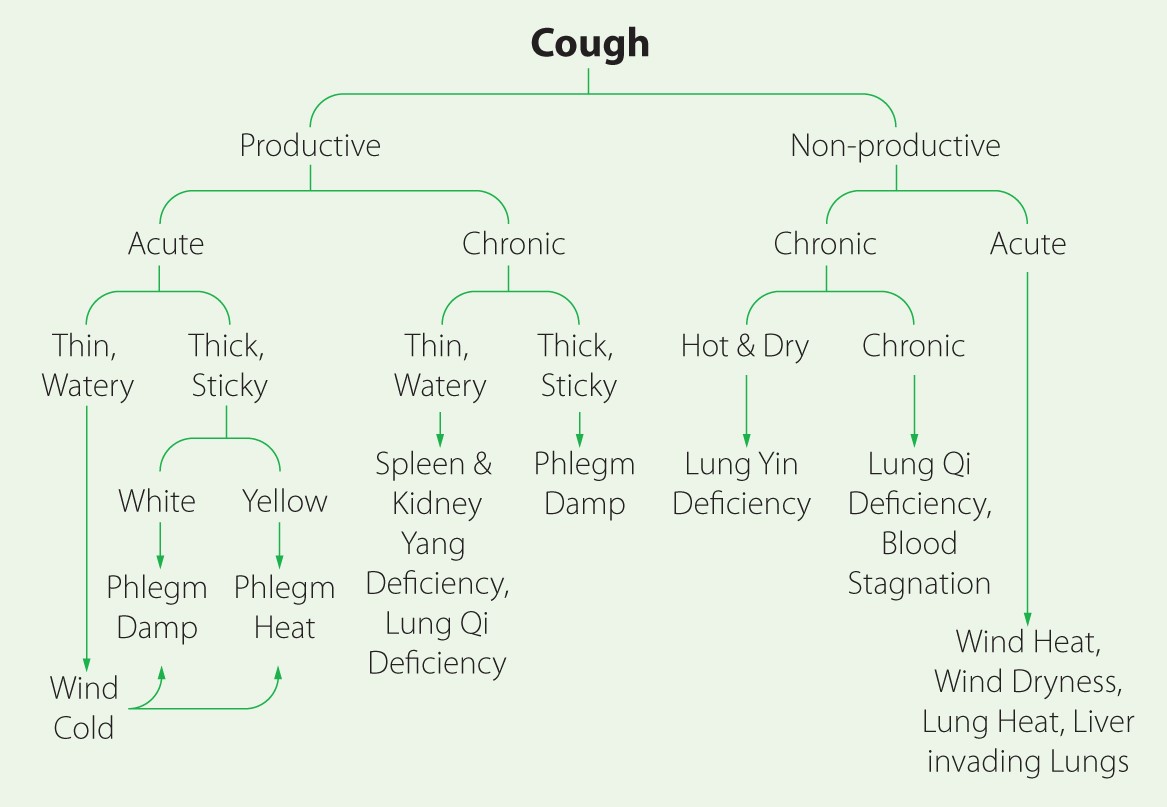 Kidney (and Spleen) yang deficiency can give rise to cough by failing to move and process fluids - these fluids accumulate in the Lung and block the descent of Lung qi. Although this type of cough is based on a profound deficiency, the manifestation (i.e. the cough) is excess, and in some cases can be severe and even life threatening. 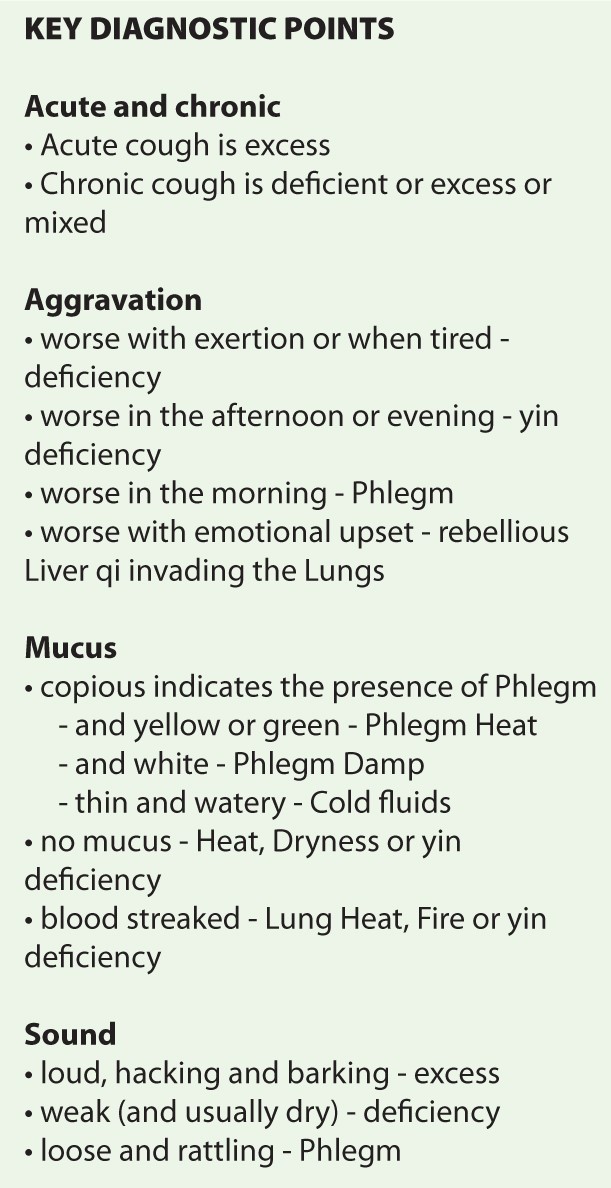 The first step in diagnosis is to determine whether the cough is acute or chronic. Acute cough is of no more than a couple of weeks’ duration, and is usually due to external pathogens, although it may also be of internal origin, for example, Liver invading the Lungs. Acute cough is always excess. Chronic cough is either deficient or excess, or more commonly, a mixture of both and is defined by its recurrent and prolonged nature. In general a cough that persists longer than a few weeks is considered chronic.[i]

Most types of cough respond quite well to TCM treatment, especially those acute coughs due to invading exterior pathogens. Chronic and deficient types also generally respond well, however the possibility of a more sinister cause, like carcinoma should be kept in mind in those patients with persistent and unresponsive cough. A common type of cough, and one that needs no specific therapy other than avoidance of tobacco, is the smoker's cough. In the absence of any major damage to the Lung yin, simply stopping smoking will resolve the problem.

Acupuncture is the treatment of choice in the initial stages of an exterior attack - it is simple, quick and quite reliable, and the patient often leaves the clinic cured or feeling much better. For the chronic deficiencies (especially yin deficiency), herbs are generally better, although a combination of herbs and acupuncture may offer the best possible approach.

[i] Chronic coughs, particularly in children, are often diagnosed as asthma, and the treatment commonly applied (in children and adults) is inhaled steroids and bronchodilators. 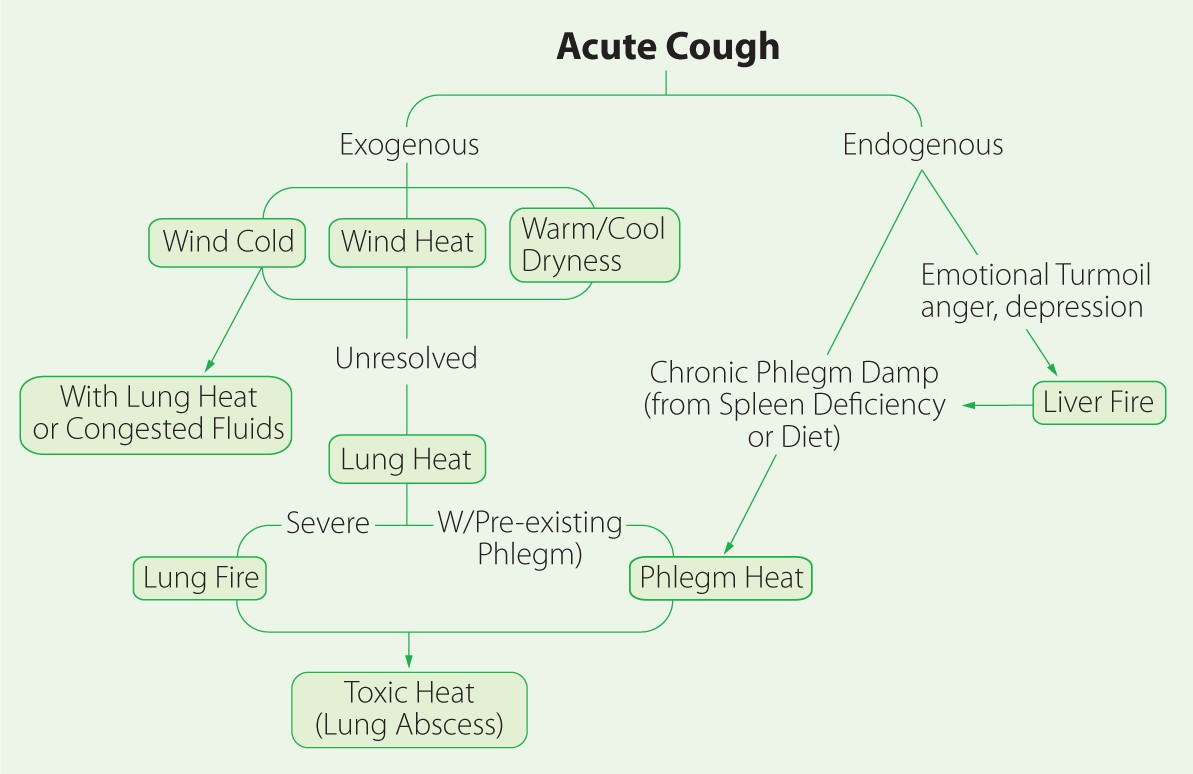 William Maclean, M.Sc Chin. Med. is an internationally renowned practitioner, teacher and author from Australia, with over 25 years of clinical experience in the field of Chinese medicine. Will teaches in the Masters programs at the University of Sydney and University of Technology Sydney, and lectures to students and practitioners around the world. In addition to his long years in practice, Will is the author (with Jane Lyttleton) of the excellent reference books: Clinical Handbook of Internal Medicine series Volumes 1, 2 and 3, the Clinical Manual of Chinese Herbal Patent Medicines, the Clinical Handbook of Chinese Herbs: Desk Reference, and the Clinical Handbook of Internal Medicine: 2nd Edition. He also has two excellent distance learning classes for CEUs: Lingering Pathogens, which delves into a common and often unrecognized cause of persistent, baffling and often debilitating health problems, and Thyroid Dysfunction, which delves into the common problem of thyroid disorders, often an unrecognized contributor to 28 conditions such as mood and sleep disorders, and weight issues.