The Effects of the Use of Sulfites and Sulfur Fumigation

About five years ago, I authored a newsletter article entitled “The Use of Sulfur in the Preparation of Chinese Herbs: Part 1”. In that article I described the why, how, and what of the sulfur fumigation of Chinese Herbs. I also described the current legal status of sulfur fumigation in the PRC. If you want to refresh your understanding, you can find this article here.

Some of the major take-aways were:

There are well documented effects and adverse effects regarding the creation and use of sulfur dioxide and sulfites on the environment, on the food we eat, and in the production of wine. In this article, I will focus on the known adverse effects of the use of sulfur dioxide, sulfites, and sulfur fumigation on the health of humans and the quality and efficacy of Chinese herbs.

Adverse effects on processing workers
The propensity of sulfur dioxide to form acids points to a major concern regarding the treatment of Chinese herbs with sulfur dioxide. That is, sulfur dioxide not only reacts with water vapor and oxygen in the air, but also with the moisture and oxygen in the lungs. This formation of various acids is particularly harmful to the workers who administer the procedure to the herbs and who breathe the smoke and fumes produced by the burning of sulfur. These workers commonly suffer respiratory illnesses and consequently, a shortened life span. Their lungs and nasal passages are, quite literally, subjected to chemical burns.

Adverse effects on Consumers
While most people can consume a reasonable amount of sulfites with only mild or without ill effect, some individuals are said to be dangerously sensitive to even minute amounts by an undetermined mechanism. The most commonly-reported serious adverse reaction in humans to sulfur dioxide or sulfiting agents is bronchoconstriction and bronchospasm, particularly, but not exclusively, among a sensitive sub-group of asthmatics. Symptoms may include bronchoconstriction, shock, gastrointestinal disturbances, angioedema, urticaria, headaches, flushing, and tingling sensations. Less commonly, symptoms may include anaphylaxis and hypotension. Once an sensitivity develops (there are indications that repeated exposure to high levels of sulfites may induce sensitivity), future exposures can cause asthma attacks with shortness of breath, wheezing, and cough. 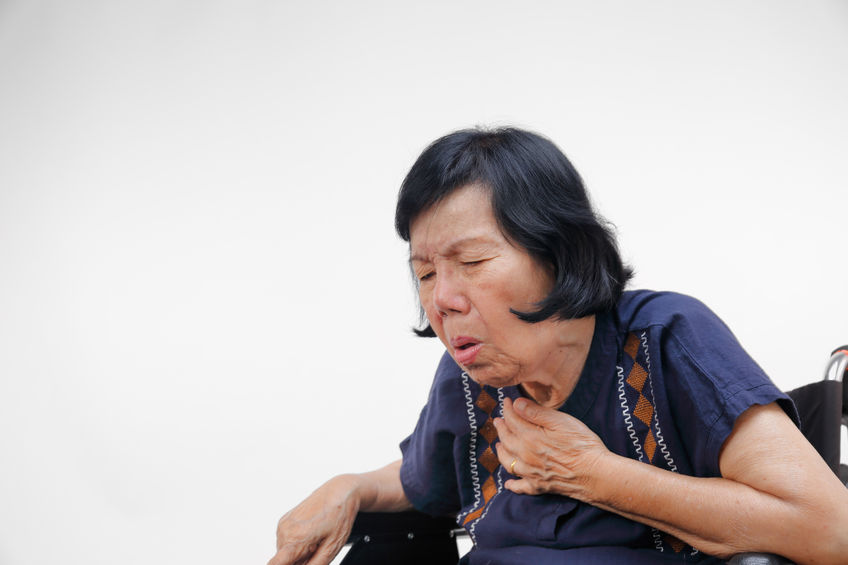 Estimates of the frequency of sulfite sensitivity among asthmatics have been made and based on experimental studies and research, reports indicate that 5-10% of asthmatics are sensitive to sulfites, with the number of steroid-dependent asthmatics having an even larger proportion of sensitive individuals.

However, sensitivity is not restricted to patients with asthma. Most estimates tend to agree that some 1% of the U.S. population have sulfite sensitivity to some degree. Among these, it should be noted that the number of individuals who have a significant sensitivity to sulfite is estimated to be in excess of one million people in the U.S.

In addition, medical research has revealed that sulfites may interfere with important metabolic enzymes, Vitamin B1 (Thiamine), and Vitamer B12 (Cyanocobalamin).

WHO Report and Acceptable Daily Intake
The World Health Organization has published the following estimate of the acceptable daily intake of sulfur dioxide/sulfites in humans as being 0-0.7 mg/kg b.w. For a 150 lb person this is equivalent to around 48mg/day. Compare this to the level found in a 150ml glass of the typical red wine which contains about 14mg of sulfites. An analysis of the most serious, relatively recent, incidents involving the ingestion of foods containing sulfites found that the foods in question contained levels of 409-582 ppm in two deaths and around 2200ppm in a case that resulted in coma and long-term neurological deficiencies. 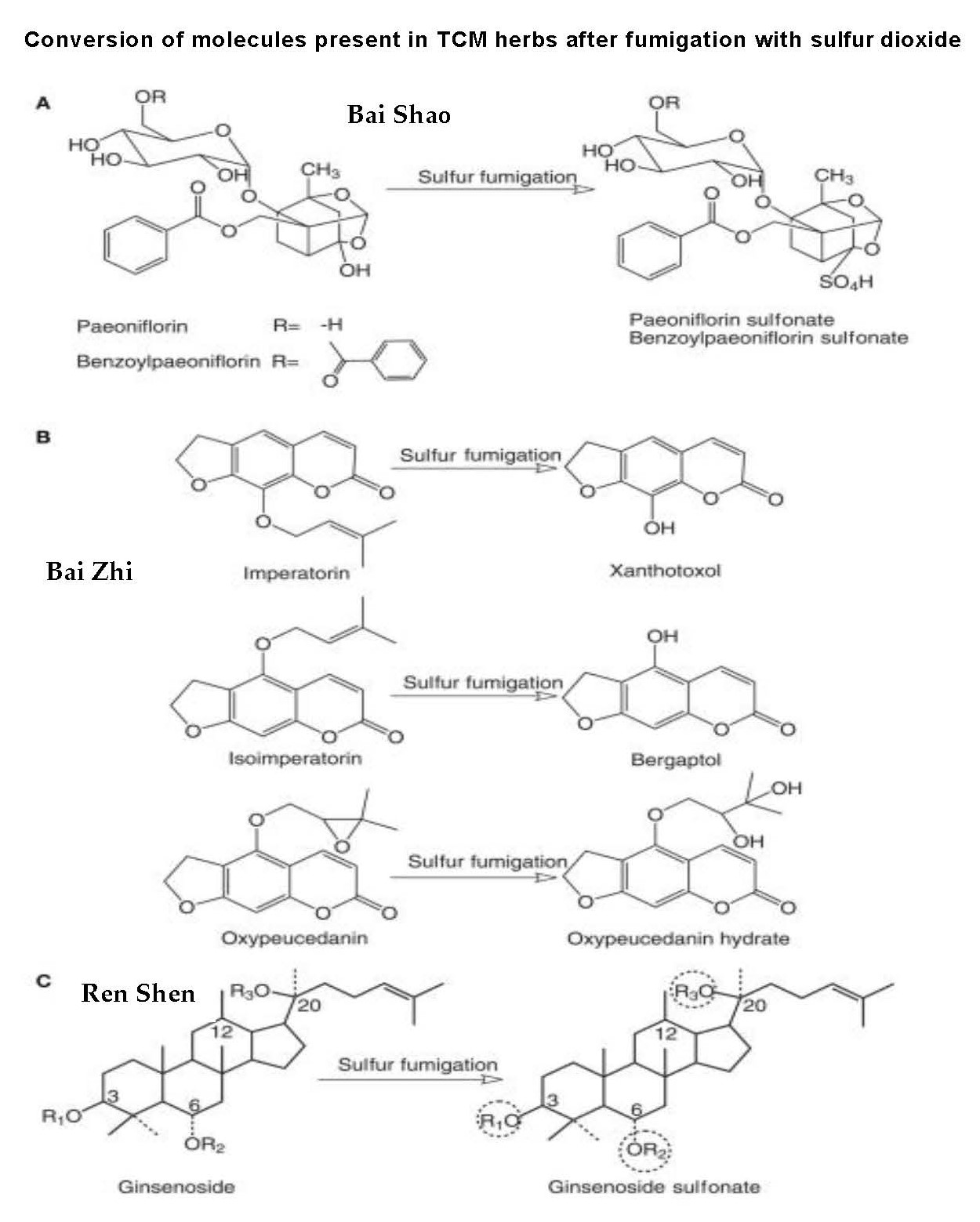 Effect on Herbal Energetics
There is little or no definitive information on sulfite effects on the energetics of Chinese herbs or herb formulas. There are two Chinese herbs that are sulfur based. The first is Mang Xiao, Natrii Sulfas, which is Sodium Sulfate (Na2SO4). This herb is salty, bitter and Cold. Na2SO4 is a salt that is not absorbed systemically but remains in the GI tract acting as an osmotic agent that increases water content and pressure in the bowels. This induces peristalsis and bowel movement. In Chinese medicine, it is said that Mang Xiao moistens and softens the stool and purges excess heat.

The second is Elemental Sulfur, Liu Huang, which is sour, warm and toxic. It is primarily used as a topical to relieve itching due to Damp pathogen and to kill parasites such as scabies. Internally, it is sometimes used to treat Kidney yang deficiency or collapse. The usual dose is 1-3g with 10-20g considered to be toxic. Adverse effects range from tearing and runny nose to impaired liver function to respiratory failure.

Of course, the sulfites that are added to Chinese herbs are neither of these “herbal” species. However, one can conclude that the sulfites used to fumigate herbs should be considered sour, since they are acidic and thus, astringent in nature. A general caution, then, can be extrapolated is that they may have a negative effect when treating conditions characterized by the presence of pathogenic factors since the astringency could bind and restrain the pathogen in the body. Secondly, in a formula, one may be concerned with sweet, tonic herbs, especially, becoming sour when treated with sulfites, especially given the amount of sulfite that may be added by the source processor. There may be debate as to sulfites’ “temperature”. Most people consider sulfites to be warm, similar to Sulfur, but it is not clear that this has actually been investigated.

Effects on Phytochemicals
Recent research conducted in the US has demonstrated that there are significant changes to the chemical constitution and pharmacokinetics of Chinese herbs which have been treated with sulfur dioxide. The added sulfites bind to carbonyl groups (R-C=O) and hydroxyl groups (R-C-OH). While some sulfite ion maybe deposited on the surface of the herb, sulfonates are formed when sulfur dioxide gas is perfused into the matrix and onto the surfaces of herbs. Carbonyl and hydroxyl groups are found in most naturally-occurring organic chemicals including fatty acids, amino acids and proteins, aldehydes, steroidal compounds, and importantly, glycosides and alkaloids.

Thus, the evidence shows that the application of sulfur dioxide is not merely a benign addition of sulfur dioxide or sulfites to the surface of the herbs. There are changes to both the marker chemicals which are used to identify various herbs but also to those phytochemicals that are thought to be responsible for an herb’s therapeutic effects. The changes include the creation of less therapeutically significant sulfonates and the complete loss of some phytochemicals because they are converted into new chemicals with presumably different physiological actions.

Examples of the effects of sulfur fumigation or reaction with sulfiting agents on the chemical constitution and pharmacokinetics of select TCM herbs: