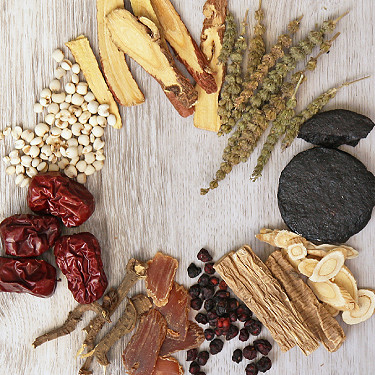 The Spring and Fall are seasons that especially impact the Lung. In TCM terms, we say the Lung is the “tender organ” because it is directly exposed to the environment via the respiratory process and in its role in regulating the exterior. A wide variety of external factors can affect the Lung, including the five environmental factors of Wind, Cold, Heat, Dampness and Summerheat, as well as miscellaneous factors like pollen, animal dander, smoke, and environmental pollution. In today's article, I will discuss three important formulas that address specific Lung pathologies seen in clinical practice.

The original formula of Bu Fei Tang was found in Classified Prescriptions of Eternal Memory, a 22-volume work compiled by Li Zhongnan, and completed in 1331. This traditional formula (with the modern addition of Ming dang shen) treats Lung Qi Deficiency, and its therapeutic effects address both organ and surface symptoms. Indications include shortness of breath, weak cough, wheezing, lassitude, fatigue, and spontaneous perspiration. The patient's appearance will be one of weakness, lassitude and often accompanied by a pale complexion. Lung Qi deficiency coughs are most often weak, persistent and can easily tire the patient out. Symptoms are aggravated by exertion, fatigue, and over exposure to wind or other environmental factors. If phlegm is present, it is most often thin, clear, and frothy. The tongue body is pale to slightly gray, and the pulse either weak, or floating, empty, and deficient.

The chief herbs are Huang qi and Ren shen. This pair strongly tonifies the Spleen and Lung Qi and strengthens the Wei Qi to secure the surface. Sang bai pi, Zi wan and Ming dang shen are the deputy herbs that open and descend the Lung Qi and stop cough and wheezing. These three herbs have light phlegm dispelling properties, while also exerting a fluid regulating and moistening effect on the Lung. Wu wei zi secures the Lung Qi, while helping the Kidneys in grasping the Qi. Shu di huang tonifies the Kidney essence to strengthen the relationship between Lung and Kidney.

Synopsis: This is a primary formula for treating Lung Qi deficiency leading to cough, shortness of breath, wheezing, frequent colds, and an aversion to wind.

Contraindications: This formula addresses a purely deficiency picture, and is therefore contraindicated in febrile illness, external invasion of pathogenic factors, or when pathogenic influences remain in the Lung.

This herbal formula was first listed in Multitude of Marvelous Formulas for Sustaining Life in 1550. A later discussion in Investigations of Medical Formulas, the Ming dynasty physician Wu Kun described the formula as follows: "This formula masters Lung deficiency with contracted Cold leading to Rebellious Qi, Diaphragmatic Heat, and wheezing. Wheezing refers to the thick sounds. If Cold fetters the exterior, the Yang Qi is unable to thrust outward, causing Rebellious Qi. The Qi joins with the Diaphragm, producing Yang within Yang, and thus leading to Heat."

Wu Kun's words describe the etiology leading to the classical use of Ding Chuan Tang. The specific pathology for this formula is coughing, wheezing and labored breathing with Phlegm or Phlegm Heat congested in the Lungs. Lung Qi deficiency is the actual underlying cause of this excess clinical presentation. With this pathology, the excess Phlegm or Phlegm Heat must be addressed and resolved first before the underlying deficiency can be treated.

Indications for Ding Chuan Tang are coughing and wheezing due to Phlegm or Phlegm Heat congested in the Lung. Additional indications include moderate to thick white or yellow phlegm that is difficult to expectorate, labored breathing, greasy white or yellow tongue coating, and a slippery, rapid pulse.

Though originally designed to treat a mixed picture, the main pathology for Ding Chuan Tang is blockage of the Lung's descending function caused by Phlegm accumulation. The herbs Jie geng, Xing ren, Bai bu, Zi wan and Ban xia all work together to eliminate phlegm, free and descend the Lung Qi, and arrest cough and wheezing. Zi su zi is the strongest calm wheezing herb in the formula and is counter-balanced by Bai guo's ability to contain the leakage of Lung Qi and prevent excessive dispersion and depletion from the above herbs. Xing ren and Sang bai pi descend the Qi, and their moistening property prevents over-drying of other ingredients. Huang qin clears heat and eliminates toxins, and Gan cao moistens and harmonizes the actions of the other ingredients.

Synopsis: This formula is indicated in cases of Phlegm or Phlegm Heat accumulation in the Lung with associated cough, difficult breathing, and wheezing. The prescription contains no tonifying herbs, and it is important to note that although the basis of the development for the above pathology may be external pathogenic influences, the modern use of this formula does not require the presence of excess symptoms.

Qi Guan Yan Wan is a modern empirical formula that addresses chronic cough due to Damp Phlegm accumulation in the Lungs due to underlying Spleen Deficiency. Indications include chronic recurring cough, chest congestion, mild wheezing, and dyspnea. The cough is most often productive with white or thick white phlegm. The tongue is slightly pale and enlarged with a white or greasy white coating. The pulse is generally soft or slippery, and weaker on the right side in the first and second positions.

The second group of herbs including Pi pa ye, Sang ye, Sang bai pi, Xing ren, Kuan dong hua, and Chuan bei mu enter the Lung and all have moistening and phlegm thinning properties. When eliminating Phlegm in the Lung there is always the risk of over-drying, so it is important to gently moisten the Lung simultaneously. In addition, this group also opens and descends the Lung Qi and stops cough.

Synopsis: This formula addresses chronic cough, chest congestion, and shortness of breath due to Damp Phlegm in the Lung with an underlying Spleen deficiency.

Contraindications: This formula is contraindicated is cases of cough, asthma, wheezing and shortness of breath from Yin deficiency or Lung dryness.

The treatment of Lung conditions is always challenging. My recommendation to practitioners is to start with gentle formulas and to proceed slowly. Always remember that the Lung is the “tender organ”!