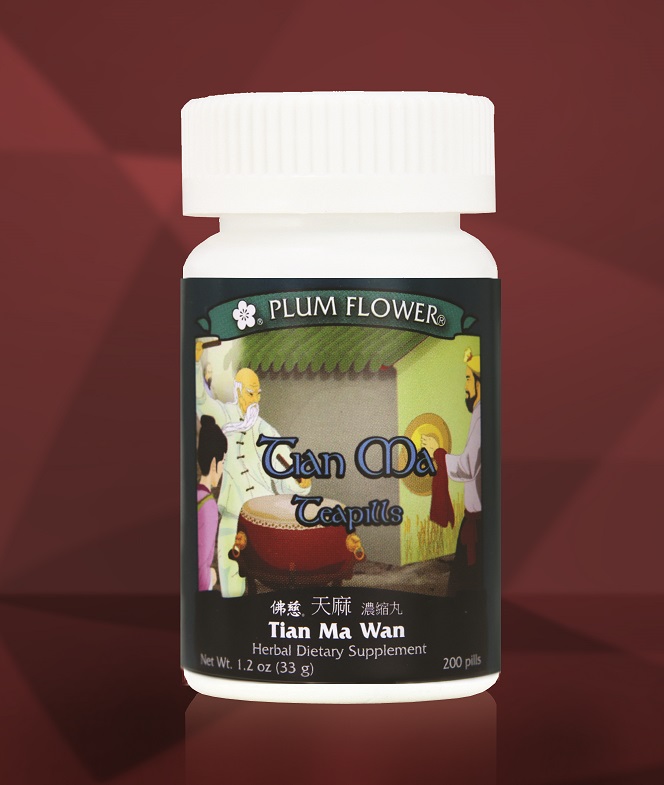 Presentation: Stiff neck and upper back, occasional headaches, visual disturbances, occasional dizziness, mild trembling, occasional numbness of the head, hands and feet, difficulty sleeping, irritability, agitation, occasional fatigue, facial and neck flushing, a sensation of heat rushing to the head, dry skin, hair and mucous membranes. May also present with heaviness, occasional numbness, stiffness, spasm and weakness in various locations throughout the body, which may be exacerbated in cold and damp weather or during changes in the weather. Tongue: slightly red and dry, possible thin sticky coat. Pulse: due to the deficient/excess presentation, some combination of wiry, rapid, thin, weak

Dosage & Administration: The standard dosage is 8 pills, 3 x day. Administer half an hour before or one hour after eating for optimal digestion & absorption. In the initial phases, dosage may be increased to 10-14 teapills 3 times per day, then reduced to a maintenance dose as the formula takes effect. May be used medium term, for several weeks to several months.

Clinical Comments: Originally published in 1624 in Dr. Zhang Jingyue’s The Complete Works of Jing Yue/Jing Yue Quan Shu as Yi Lao Tian Ma Wan, Tian Ma Wan has been “rediscovered” in the past 50 years as a patent medicine. Excellent to nourish the Liver and Kidney deficient root to deal with neck and shoulder tension, occasional headache and/or dizziness due to episodes of Liver Yang rising and stirring internal wind. Also effective for treating wind-damp Bi Zheng (obstruction syndrome) blocking the neck, shoulders and various channels all over the body, combined with underlying Liver and Kidney deficiency that leaves the low back, hips and legs malnourished and easily blocked by wind-damp, causing occasional pain.

Tian Ma Wan is useful in the early stages of internal wind moving against a background of Yin and Blood deficiency allowing for wind to travel through the partially empty channels causing slight trembling. It can also help support recovery from an internal wind-strike/Zhong Feng, particularly when there is significant Yin and Blood deficiency. By nourishing the Liver and Kidney, clearing internal wind and expelling wind-damp from the channels, it promotes normal circulation and sensation, particularly in the lower limbs, where it can help mitigate the side effects of many disorders associated with weakness or loss of sensation of peripheral muscles. The formula is also directed to the head and face where it can support the long-term recovery phases of internal wind attacking the face with a background weakness due to Yin and Blood deficiency, such as wind attacking the jaw or trigeminal nerve.

In the modern clinic, Tian Ma Wan is often used for perimenopausal women with a mixed pattern of Liver and Kidney deficiency (Yin, Blood, possibly slight Yang Xu) and some combination of wind-damp Bi Zheng, episodes of Liver Yang rising and possibly the stirring of internal wind to the head. Key symptoms include occasional headaches and/or dizziness, neck, shoulder and upper back tension, hot flashes and facial/neck flushing, difficulty sleeping, irritability, as well as occasional pain, stiffness and spasm in various locations, but particularly the neck, shoulder, hip, low back and legs. Although this formula tonifies Liver and Kidney Yin and Blood, it also contains several warm herbs such as Du zhong, Du huo, Qiang huo and a small dose of hot Fu zi, rendering it a relatively neutral temperature, and giving it the ability to also slightly warm the Yang.

Shu di huang and Dang gui combine to strongly nourish Liver and Kidney Yin and Blood, and make up a bit over one third of the formula. Dang gui also strongly invigorates the Blood and dispels cold to aid with the blockage in the channels and regulates menstruation to help with hormone-related perimenopausal issues, particularly in tandem with Shu di huang. Qiang huo combines with Du huo and Bi xie to strongly expel wind-damp and unblock the collaterals to reduce the heaviness, occasional numbness, stiffness and spasm in various locations throughout the body. Qiang huo’s actions are focused on the upper body (neck, shoulders), while Du huo and Bi xie’s actions are focused on the lower body (low back, hips, legs, knees). Qiang huo and Du huo specifically treat occasional headaches and Bi xie relaxes the sinews. Tian ma calms and moistens the Liver, anchors the Yang, and strongly controls the internal stirring of Liver wind to treat occasional headache and dizziness. It relieves occasional pain, helps resolve stiff neck and upper back, calms mild trembling, and works with the other herbs to clear wind-damp obstruction. Du zhong, Xuan shen and Huai niu xi further strengthen the root by tonifying and nourishing the Liver and Kidney, strengthening sinews and bones, and benefiting the joints. Du zhong aids in the smooth flow of Qi and Blood, combines with Huai niu xi and Du huo to target occasional pain in the low back, hips and knees, and with Fu zi to benefit Yang Qi. Xuan Shen also strongly nourishes Yin and directs deficient fire downwards, to treat the facial and neck flushing and sensation of heat rushing to the head. Huai niu xi also descends and conducts Blood downward out of the head, helping to quell the Liver Yang rising. A very small dose of Fu zi is added not to tonify the Yang, but rather to activate and mobilize Yang Qi in the channels and collaterals, dispel cold and damp, and increase the ability to treat occasional pain. A small dose of Fu zi also acts as a spark to “return the Yang to its source,” to the Ming Men.