Trip to Bozhou, Part 2: The People 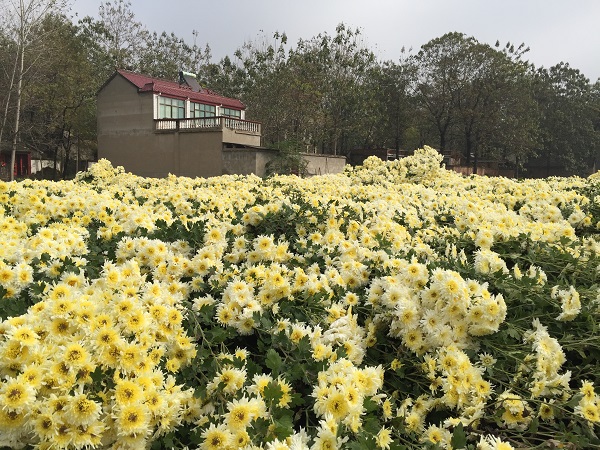 While the herb market was a lot of fun and eye-opening, my favorite part of travelling in China (and most anywhere) is meeting new people and learning about their lives. On this visit I met quite a few “herb people" of varying backgrounds, and witnessed much of the impressive entrepreneurial spirit in Bozhou.

One of Mr. Zhang's local friends is Ms. Wang Pan Pan. Pan Pan is 30, the eldest of her siblings, and has been working with herbs her entire life. She is a 5th generation herb farmer in Bozhou, and cultivates a small farm owned jointly by her entire family. In Bozhou, up until about 10 years ago, land reform allowed Bozhou citizens from farming backgrounds to be entitled to a few acres each of farmland. Pan Pan's family consolidated their land, and she works it all with her parents, siblings, and in-laws. They share a locker in the farmer's market, and Pan Pan or one of her siblings is there every morning. Most herbs on their farm had already been harvested, but Pan Pan took us to see their small plot of Ju Hua, for which Bozhou is famous for.

Another of Mr. Zhang's friends, and also one of our suppliers, is Mr. Xu Xiao Hu. A young entrepreneur, Mr. Xu is only 28, but already a multi-millionaire. Like Pan Pan, Mr. Xu also came from an herb farming family, but decided he didn't want to farm. Beginning in his teens, he went on buying trips with older relatives to Vietnam and Cambodia to buy Huang Jing to resell in China. Now Mr. Xu goes to Southeast Asia every other month, and currently trades in over 10,000 metric tons (22,000 pounds!) of Huang Jing annually.

We also met Mr. Wu Jun, who was drying Bai Shao on the side of the road. Mr. Wu has a Bai Shao processing service, which he graciously took us to see. The peony is Bozhou's city flower, and Bai Shao is one of its major crops. Previously, Bai Shao was hand peeled, but Mr. Wu's little business has mechanized it, and the small operation showed major ingenuity. On a cleared field on his farm, Mr. Wu had built something reminiscent of a 6 foot wide concrete kiddie pool, but which had a wood-burning furnace underneath complete with chimney on the opposite end. There were also three large rotating drums. Mr. Wu's workers would empty sacks of fresh Bai Shao roots into the pool, which was filled with water and bubbling because of the furnace. The Bai Shao was cooked a bit to loosen the peel. After about 10 minutes, pitchforks were used to scoop out the Bai Shao and toss it into the drums. A shovelful of gravel was added to help slough off the peels. As the drum spun, well water from a large hose was used to wash away the peels, and after about 15 minutes, bright-white peeled Bai Shao was transferred to Mr. Wu's little blue pick-up truck to be taken for sulfuring and drying. 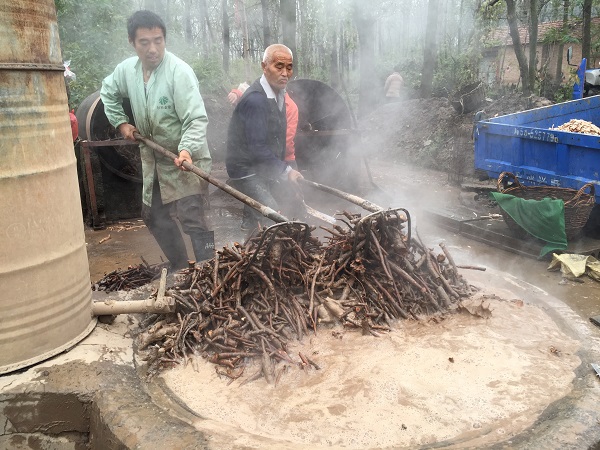 In stark contrast to Mr. Wu's enterprise was the Du Family's. We happened upon them as we were driving down a small lane in a more rural neighborhood of Bozhou. The young Mr. and Mrs. Du and his mother were sitting around a battered coffee table in the doorway of what looked like a small concrete warehouse, but which was actually also their home. They were processing fresh Peony roots into Mu Dan Pi. A large pile of roots were being hand scraped with what looked like large shards of broken glass. Later, each root would be cored, then sliced and dried. We chatted as they worked, and I learned that these long roots, ranging in thickness from that of a pencil to about that of my thumb, had finally been harvested after 6 years. The Dus were in the process of scraping a little over 500 kilos (1100 pounds) and once cored and dried, would be about 250 kilos of Mu Dan Pi. They hoped to get about 5000-6000 Renminbi ($800-$1000) for their crop. I was struck by the fact that as an investment, they would essentially be making $166 per year, not taking into account their hundreds of hours of labor. The American in me gawked at that. The Dus, however, seemed very content and joked and laughed as they were working. What I realized about these gracious people, from Pan Pan to the Dus, is that each one was optimistic and full of purpose. I appreciated and was humbled by their entrepreneurial spirit, their authenticity, and their obvious pride and satisfaction with their work. Although we operate and make our products at a much higher level, I felt a kinship with these new friends in Bozhou. No matter the level or the resources, they and I, and all the hardworking people I work with whether in China or here at Mayway, are doing work we believe in.