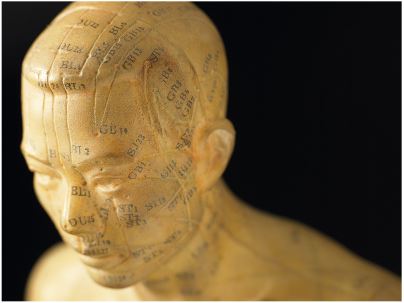 Of the fourteen main meridian pathways, the Foot Tai Yang (Urinary Bladder) and Foot Shao Yang (Gallbladder) meridians are the two channels used most frequently for treating diseases of the head and neck. In Master Tung’s body of work, many points are loosely classified as Gallbladder channel points. In this article, I will compare Tung’s Gallbladder points, all located between the Leg Shao Yang (Gallbladder) and Leg Yang Ming (Stomach) channels, and with a powerful effect on the head, neck, face, jaw and five senses.

For example, 77.22-77.23 Beside Three Miles (Tung’s GB 34), has a tendon/ligament function when used for head and neck disorders. These points are often used for many kinds of migraine or temple headaches, and especially for cyclic migraines which In the Clinic occur at ovulation or during the premenstrual phase of a woman’s cycle, when emotional tension is high and the liver is more congested. We might also expect to see other PMS symptoms related to liver qi congestion, including breast sensitivity, irritability, photophobia, and insomnia.

88.17-88.19 Four Horses are also between the Leg Shao Yang and Leg Yang Ming channels, but with a reaction area of Lung and Liver, these points have more influence in conditions related to the five senses and the immune system. Four Horses can be used when a patient has upper back pain and headache due to wind chill or wind heat invasions; it can also be used for treating skin diseases, allergies, or autoimmune disorders.

77.27 Outer Three Gates, used primarily to treat cancer found anywhere in the body, is not used for treatment of the head and neck unless there is also a cancer-related condition somewhere in the body. Because they fall between the Yang Ming and Shao Yang channels, 77.05-77.07 Three Weights (Tung’s GB 39) are especially effective for disorders related to wind and phlegm, such as brain injuries or psychosis. Three Weights have a very wide range of use, but due to their proximity to and relationship with GB 39 (the Sea of Marrow), they are used to treat bone marrow and blood diseases. They are also especially good for problems of the neck and head.

I recently had a case that perfectly illustrates the use of 77.05-77.07 Three Weights. A 76-year-old man came to see me because he was experiencing extreme vertigo. He’d been falling to the ground without warning, or would suddenly find himself holding on to his closet rod in an attempt not to fall. I tried several treatments using 88.17-88.19 Four Horses for typical vertigo, but they had no effect. Because the Epley maneuver did not result in extreme spinning and nausea, I knew that his problem was not Meniere’s Disease, or springtime liver wind. A brain scan showed no cysts or tumors, and fewer ischemic areas than might be expected in a man his age.

A Magnetic Resonance Angiogram (MRA) scan determined that the patient had a completely occluded intervertebral artery in his neck. He then saw a vascular surgeon, who would not operate because the artery had slowly closed over a long period of time and the surgeon feared that opening the artery would flood the brain with blood, likely causing immediate death. The patient was told that he would have to live with the acute vertigo. I began to treat the patient three times each week, using 77.05-77.07 Three Weights. These points are excellent for neck and head problems, and because they are located in the vicinity of GB39, they are also excellent for blood and blood vessels. I cupped his neck in order to clear muscle tension and accumulated toxins that contributed to the impeded blood flow. Within three weeks, the severity of the vertigo attacks began to lessen. Within twelve weeks, the attacks had almost completely stopped, though he had very infrequent sensations of slight dizziness lasting one to three seconds.

Because the diagnosis was so grave and the episodes so violent, I continued treatment three times per week for a total of sixteen weeks, and then reduced the frequency of his visits to once a week. Three Weights had successfully rerouted the blood supply to his brain, bypassing the occluded artery. After six months of two to three treatments per month, and without any other signs of vertigo, we ended treatment for this problem. One year later, he was still free of dizziness.

There are additional Gallbladder point patterns in Master Tung’s body of work. To learn more about the points discussed in this article, along with many others, please join me for an In-Depth Master Tung’s Magic Points & Theory Seminar.

The In-Depth Seminar is a two-weekend course designed to immerse practitioners in Master Tung’s profound system of acupuncture. We will begin with the six principle theories of Tung’s acupuncture system and then proceed with points found on the hands, arms and feet; on the second weekend, we will move through the legs and head, and end with the torso. Points will be presented with precise anatomical location, operative theory, indications, with some point combinations and case studies from my thirty years of private practice, along with cases from my honored teachers, Drs. Miriam Lee and Young Wei Chieh. Master Tung has given us many extraordinary points that yield immediate and lasting results. Join us for the in-person seminar at Mayway or log in to the live webinar .

Bio: Susan Johnson has been studying acupuncture since 1982. A graduate of the American College of Traditional Chinese Medicine, Susan practiced in San Francisco from 1983-88, specializing in the treatment of HIV. She studied Master Tung’s Magic Points with Dr. Miriam Lee and Dr. Young Wei Chieh, Ph.D. for more than 12 years and has used them nearly exclusively in her practice for thirty years. Dr. Tung’s system, which utilizes meridian points in new ways and also includes extra points, can provide perfect keys to the treatment of particularly challenging conditions, in addition to a wide range of common ailments. Dr. Tung’s Points are immediately useful and instantly effective in most cases. Susan maintains a private practice in Santa Cruz, California. She is a dynamic teacher renowned for her clear presentation of this style of acupuncture.