It’s the time of year to get cozy with a steaming mug of hot chocolate, and what better way to add a little warmth than with herbs? 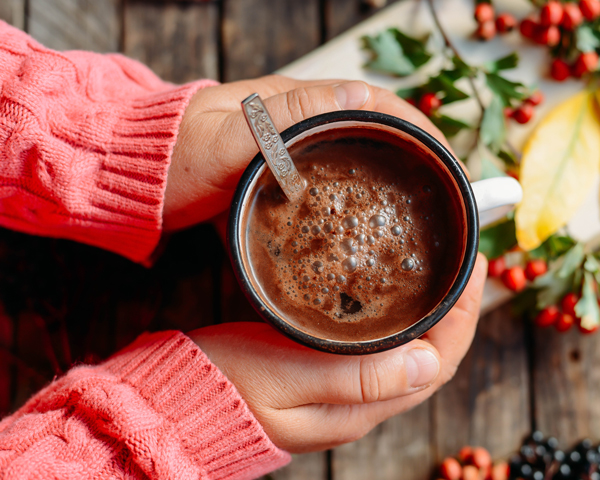 Drinking chocolate is a New World tradition that goes back to the time of the Olmecs. Cups of chocolate show up in Mayan glyphs and Aztec leader Montezuma is rumored to have drank 50 cups of chocolate a day. Traditionally combined with cinnamon, cayenne and other spices, Mexican chocolate is whisked to a froth using a special wooden device called a molinillo. Used medicinally and in religious ceremonies, Spanish conquistadores took notice of this drink and brought cacao beans back to Europe where new recipes developed.

Intrigued by the idea of a medicinal spiced cocoa, we invented our own version, using the traditional cayenne and cinnamon, plus a few herbs the early Mesoamericans didn’t have access to. Almond milk keeps it plant-based and gives it a rich flavor without the milk fat. Although the recipe lends itself easily to substituting with other "milks" - coconut milk, soy milk, cow's milk, etc. We have used raw turbinado sugar to cut the bitterness of Ling Zhi, but raw honey or coconut sugar may also be used, and bring their own health benefits. For those concerned with blood-sugar levels, coconut sugar has a lower glycemic index than turbinado, and Rou Gui/Cinnamon bark has been shown to reduce serum glucose, triglycerides, LDL cholesterol, and total cholesterol.

Ling Zhi/Reishi mushroom translates to “spiritual mushroom” and was traditionally linked to immortality. It calms the Shen, tonifies Qi and Blood, and nourishes the Heart. Rou Gui/Cinnamon bark is a strong warming herb that works to unblock cold obstruction, warm the Heart and Kidney Yang, warm the Mingmen, and encourage the generation of Qi and Blood. Tangerine peel/Chen Pi regulates the Qi and Middle Jiao and dries dampness. Cayenne powder ("La Jiao" in Chinese medicine), like Chuan Jiao/Sichwan pepper, strongly warms the interior, it also stimulates the appetite and promotes digestion. A perfect combination for cold winter days!

*Note that all herbs are extract powders. The herbs have been decocted and concentrated into powder. This is different from powdered herbs.