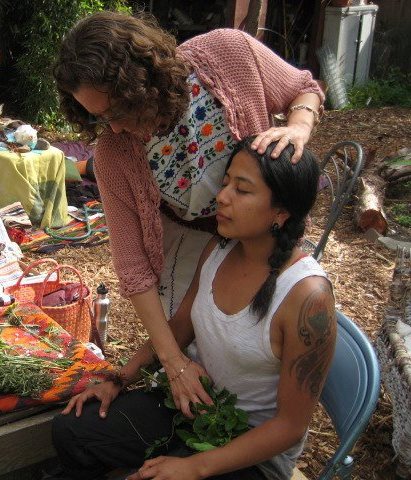 In November of 2013, Mayway donated herbal medicine to help support an upcoming Women’s Healing Clinic. It was a huge and amazing success! Over the course of the 2-day Clinic we saw/served close to 400 women from the Bay Area and beyond. From my experience and the information on our sign in sheets, we know women came from Oakland, Berkeley, San Leandro, Union City, Hayward, Richmond, San Francisco, Santa Rosa and as far as Sacramento; representing the Black, Latino, Arab, Indian, Filipina, Asian Pacific Islander, Native American and White communities; immigrants and undocumented folks from Latin America, Asian and African countries; from 5-60 years old; female and feminine, LGBTQ and transgender; of able mind and body as well as physically/mentally challenged; women from our core target population including previously incarcerated women, survivors of domestic abuse, sexual abuse and street violence, in or post- substance abuse recovery processes, and women who are over-worked, under-resourced and lacking access to holistic care.

In addition to having reached the population of women we were aiming to serve and exceeding the number of women we anticipated serving, we also succeeded in our goal to plant the seed of consciousness around a return to the sacred, the ancestral and loving, natural forms of healing, including spiritual healing. One of the services we offered was an energy/ spiritual cleanse referred to as a Limpia in Spanish. Limpias are well outside of what most people know or consider as “alternative medicine”. They come from Latin American indigenous traditions and use prayer and ceremonial instruments to remove negative energy related to traumas and stress. This was the most popular service at the Clinic!

People’s lives changed at the Women’s Healing Clinic. People who were on the verge of giving up everything or going over the edge had their spirits touched, healed and lifted, leaving with new energy, hope and a desire to continue on with their life and being part of the collective struggle for positive change. Some of the testimonies and exclamations that we heard repeatedly throughout the day include, “Just being here is healing!”, “I have been waiting for something like this for so long”, “I feel like a whole new person”, and most of all, “When is the next Clinic going to be??” There were numerous cries and tears of joy, sighs of relief, and I received hundreds of embraces from total strangers who were overwhelmed with gratitude.

Funds and in kind donations given went to the Women who were treated at the clinic and were very much appreciated. These funds were an indispensable part of our project.

A second event was held just a few weeks ago on June 6, 2014 in Oakland where 220 women were served. Another Clinic is in the works to be held in Richmond, CA, on August 15, 2014. Additionally there are plans to hold a Men’s Healing Clinic for which the date has not been set, but it will likely be sometime late November or early December with the date being finalized in the next month or so. Those interested in volunteering or contributing to either of the upcoming events should contact Suzanne Snyder at [email protected] You can check our site for updated information about upcoming events:

Since the Clinic in November 2013 we have posted a couple of blog entries on the Healing Clinic Collective site. You can also read our post at Movement Generation’s website:

We refrained from taking too many photos to respect the privacy of people receiving treatment, as well as out of respect to the ceremonial nature of the space.