This article was originally published December 2, 2019 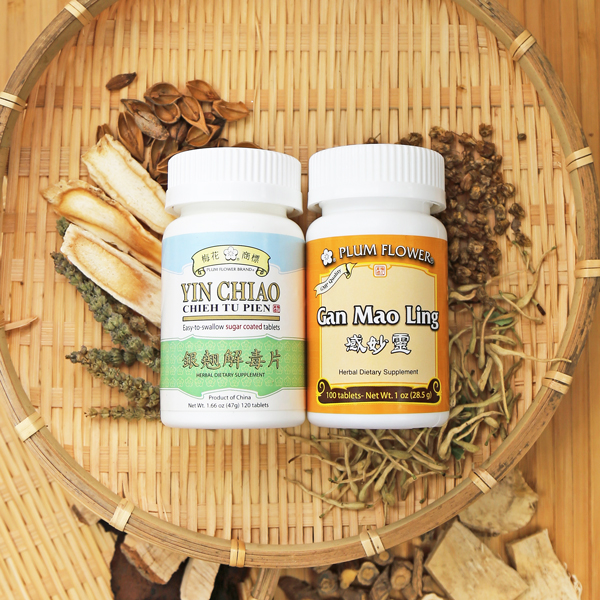 Many practitioners wonder what the differences are between these two very popular formulas to prevent and treat common wind-heat invasion. One main difference is that Yin Qiao is exclusively for wind-heat invasion, whereas Gan Mao Ling, likely due to its ability to strengthen the immune system, can also be used for the initial stages of wind-cold. Therefore, Gan Mao Ling may be safely taken by a patient before a determination is made as to the etiology of an early stage wind invasion, as well as for short term prevention of a wind invasion. However, if Gan Mao Ling does not work in the first couple of days and pronounced wind-cold signs appear, then it should be discontinued, and an appropriate wind-cold dispelling formula prescribed.

Another difference is the ability to treat wind-heat or heat toxin rashes. Yin Qiao is an excellent formula for wind-heat or heat-toxins attacking the skin causing itchy red skin lesions that appear suddenly and move around quickly, especially in the upper body. Gan Mao Ling is not very helpful for skin lesions.

Both Yin Qiao and Gan Mao Ling can be taken at the first sign of a wind-heat invasion to prevent it from taking root, but are also helpful to treat and lessen the severity of symptoms of a wind-heat invasion that has taken hold. However, Yin Qiao is only useful in prevention and treatment until the external wind-heat symptoms disappear. Then it should be discontinued. Gan Mao Ling is still useful at a lower dose to help resolve lingering symptoms such as occasional runny nose, malaise, or symptoms that just resurface in the morning and evening, due to the Gang mei gen and San cha qu, which both clear toxic heat and tonify Lung and Wei Qi. Most patients can tell when they need another dose of Gan Mao Ling because the symptoms (particularly sneezing, runny nose, malaise) reappear and then lessen noticeably 20-30 minutes after another dose. Similarly, when a dose of Yin Qiao is needed, symptoms (particularly sore throat, sneezing, red irritated eyes) reappear.

Either formula should be taken at the very first indication that wind-heat is attacking the body, such as a scratchy or sore throat, a stuffy nose, or just a subjective feeling of being off kilter. When determining which preventative formula patients should have on hand, many feel that patients who run hot and get a sore throat as their first sign of an invasion tend to respond best to Yin Qiao, and those whose first symptoms are fatigue, body aches or a runny nose may respond best to Gan Mao Ling.

However, neither formula should be taken too often as a preventative nor taken by patients with a weak Spleen and Stomach or pronounced Wei Qi deficiency. For those patients, consider Ren Shen Bai Du Tang or Xiao Chai Hu Tang.

Combinations: If a wind-heat invasion isn't stopped in the first few days by Yin Qiao or Gan Mao Ling and presents with strong symptoms of either nasal congestion or cough, then combine as needed with other formulas, or switch to a more appropriate formula. If symptoms include pronounced nasal and sinus congestion, either formula can be taken with Bi Yan Pian. If there is a cough with yellow or green phlegm, combine with Qing Qi Hua Tan Wan. If the invasion presents as a severe wind-heat invasion or heat and toxic heat penetrates into the Lung, switch to Zhong Gan Ling.

Clinical Comments: Gan Mao Ling and Yin Qiao are both fairly modern formulas in the history of Chinese herbal medicine. Gan Mao Ling is a modern research formula created in Taiwan that first appeared in mainland China in 1988. Yin Qiao San was written by Dr. Wu Ju-tong to be taken as a quick-simmer powder and first appeared in his Wen Bing Tiao Bian/Systematic Differentiation of Warm Pathogen Diseases in 1798.

Presentation: Occasional scratchy or sore throat, sudden fatigue, thirst; soreness or stiffness in the neck and shoulders/upper back, mild body aches, slight headache, runny nose, nasal congestion. Tongue: normal. May have a red tip, or a thin yellow coat. Pulse: floating. May be rapid or tight, depending on whether the external invasion is due to wind-heat or wind-cold.

TCM Diagnosis: Early stages of a wind-heat invasion possibly accompanied by heat-toxins. Also for wind-heat or heat-toxins attacking the skin, especially in the upper body.

Gan Mao Ling is considered by many to be the most effective herbal formula for early stage wind-heat or mild wind-cold, especially when administered when the first signs appear and taken consistently every 2-4 hours. It contains over 50% Gang mei gen, San cha ku and Ban lan gen, three very powerful herbs that have been heavily researched in China and used extensively in modern formulas to treat wind-heat invasions. The secret behind Gan Mao Ling’s great success treating both early stage wind-heat or mild wind-cold lies in its use of chief herbs Gang mei gen and San cha ku. Both are Taiwanese herbs not well known in mainland China and not found in most ancient or modern Materia Medicas. Both herbs were primarily known as minor toxic heat clearing herbs that also treat occasional painful conditions due to stagnation in the Jing-Luo. Interestingly, according to John Chen’s Chinese Medical Herbology and Pharmacology, Gang mei gen is now classified as part of the Regulate Qi category and considered to primarily regulate and tonify Lung Qi. According to the 16th century text Han Shi Yi Tong/ Master Han’s Comprehensive Book on Medicine, San cha ku has a direct Wei Qi tonic quality. This is a rare combination to find in Chinese medicine. Most herbs that tonify Lung and Wei Qi are seen to build a protective wall to ward off invasions, which can inadvertently trap a pathogen that has already invaded the body. In this way, Gang mei gen and San cha ku are similar in action to the western herb Echinacea purpura root, in that they can simultaneously release an external invasion and strengthen the body’s ability to resist attack. Gang mei gen also opens the chest to treat chest congestion, generates fluids and alleviates thirst. San cha ku also dispels wind-damp-heat that may cause minor inflammation. Ban lan gen and Jin yin hua strengthen the chief herbs’ ability to strongly expel toxic heat, particularly from the head, throat and eyes. Ye ju hua and Huang jing zhi/ye clear wind-heat and guide the formula to the face, particularly to the sinuses, nose, throat and eyes. Jin yin hua, Ban lan gen and Ye ju hua combine to treat occasional sore throat and slight headache. Jin yin hua and Ye ju hua are also able to release wind-heat and toxic heat from the skin. 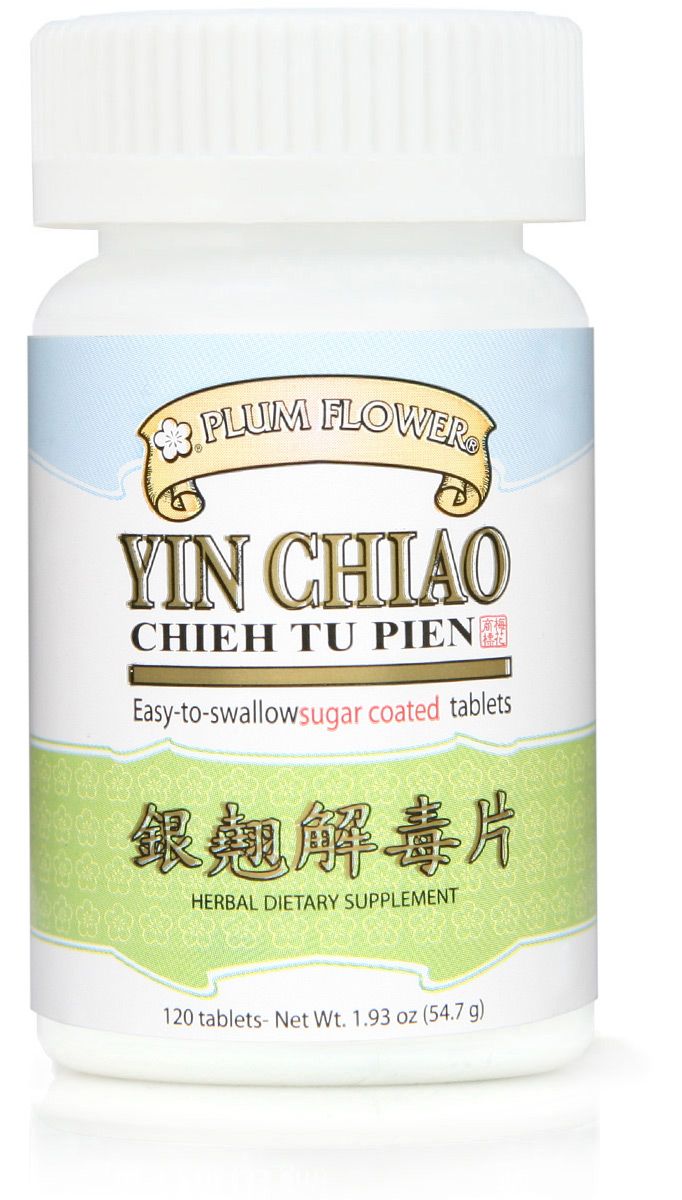 Yin Qiao has long been known as an extremely effective formula for early stage wind-heat, particularly prized for its ability to release wind-heat invasion that presents with occasional sore throat. If the sore throat is fairly mild, Gan Mao Ling may be sufficient. If it is more pronounced then Yin Qiao is definitely called for, and if severe, then Yin Qiao may be combined with Chuan Xin Lian Tablets. Chief herbs Lian qiao and Jin yin hua release the exterior, clear heat from the Lungs and resolve heat toxins. They are particularly useful for dispelling heat toxins upwards and outwards from the head, throat, eyes and skin. Jing jie, Bo he, Niu bang zi and Dan dou chi combine to strongly release the exterior, dispel wind and promote sweating, which expels the wind-heat, relaxes the muscles, and supports the chief herbs’ movement to the surface to release toxic heat. Niu bang zi strongly dispels wind-heat, resolves toxic heat, and travels up to the head where it excels at relieving occasional sore throat. Bo he excels at clearing wind heat from red irritated eyes (aided by Jing jie) and relieves mild headache. Lian qiao, Jin yin hua, Niu bang zi, Jing jie and Bo he work together to vent rashes and dispel heat toxins to treat wind-heat sores, particularly in the upper body. Lian qiao encourages the smooth flow of Qi and Blood in the twelve channels, increasing the ability to treat sores. Jie geng guides the formula to the Lung and throat, where it relieves slight cough with Lian qiao, Jing jie, Niu bang zi, Dan zhu ye, and Gan cao, and sore throat with Lian qiao, Jin yin hua, Niu bang zi, Bo he and Gan cao. Dan zhu ye and Dan dou chi clear heat and calm irritability, and Dan zhu ye clears heat from the mouth and tongue to soothe any slight sores. Gan cao harmonizes the functions of all the herbs, clears toxic heat and benefits the Lung and throat.