One of the most common experiences that a woman may have before, during, and after menopause is what is called a “hot flash”. This is a sudden, brief sensation of heat in the upper body, which is usually most intense over the face, neck, and chest although it can be sensed over the entire body and is caused by a transient dilation of the blood vessels of the skin. One’s skin may redden, as if one is blushing. A hot flash can also cause sweating. If too much body heat is lost from the sweating, the heat may change into a chill. Night sweats are hot flashes that occur at night, and they may disrupt sleep. In Western medicine pathogenesis, the mechanism that causes this vasodilation is not clear. However, hormone replacement therapy is common among physicians indicating a belief that estrogen and progesterone are involved and research also shows that trans-men who are using estrogen blockers often experience symptoms of menopause, regardless of their age. 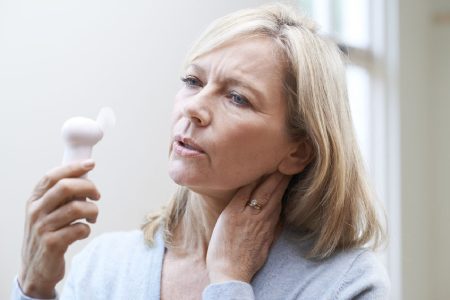 Menopause is not a disease but the phase in a woman’s life during which she transitions from a reproductive to a non-reproductive stage. Literally, the word is used to indicate the permanent cessation of menstruation. Menopause usually occurs between the ages of 45-55 and the period of transition typically spans 2-5 years. Hot flashes and other symptoms associated with this transition can last for many years more.

As Laura Stropes points out in her illuminative and thorough article in this month’s newsletter, “A Comfortable Transition to Menopause with Traditional Chinese Medicine,” there are several TCM (Traditional Chinese Medicine) syndromes that patients may exhibit before, during, and after menopause. Most of these syndromes include hot flashes as one of the primary experiences for women during menopause.

The main reason for the onset of menopause is the depletion of follicles in the ovary, which are the main source of estrogen. Among the multitude of estrogen’s functions in females is the promotion of the maturation and health of the vagina and uterus, while also supporting the function of the ovaries, including the maturation of the follicles. When the number of follicles become depleted as women age, then less estrogen is produced, and a circular loop begins, resulting in an ongoing depletion of both estrogen and mature follicles. This begins in some women as early as their mid-thirties and can be understood as an anovulatory cycle. The result can be either a short or delayed cycle. Depending on constitutional, emotional, and environmental factors, this may present in a TCM diagnosis as Liver Qi stagnation, that is, quite literally because the function (Qi) of the ovaries is impaired. 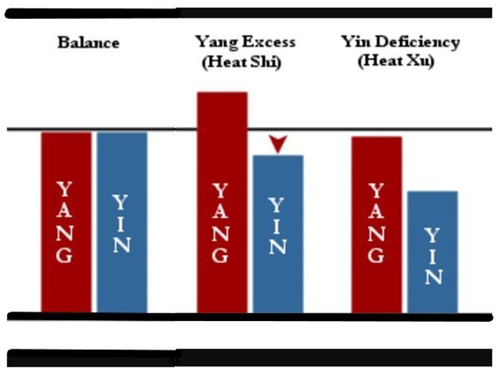 An additional effect of this depletion of estrogen and follicle maturation is that during an anovulatory cycle no egg is released and consequently, no egg is implanted in the uterine wall. When no egg is implanted the remaining sections of the follicle do not form a corpus luteum. Since the corpus luteum produces the progesterone that is part of the woman’s cycle, no progesterone is produced. While awaiting fertilization, the progesterone level rises. If fertilization does not occur, it is the falling of the progesterone level that initiates the shedding of the uterine lining which results in menses, and then the cycle begins again. No egg = no corpus luteum = no rise and fall of progesterone = no menses. When this continues to occur, menses ceases and generally, after a year of no menses, menopause is said to have occurred.

Some TCM authors and teachers differentiate Yin/Yang attributes between estrogen and progesterone (since there are two of them!) but I consider both hormones, along with FSH and LH and the limited number of follicles, to be inherently attributes of Jing/ Essence. We know that as humans age, their Jing naturally becomes depleted. For females, who are more Yin based, Kidney Yin and Jing deficiency is usually the root cause of many symptoms she may experience during this time. As Yin deficiency becomes more pronounced, there is insufficient Water to balance the normal Fire of metabolism. This can result in hot flashes, which can be diagnosed as Yin Deficient Heat. To graphically illustrate this, let us look at a familiar diagram from TCM 101.

The left-hand portion shows Yin and Yang balanced. The middle illustrates Yang Excess (Shi) with the True Heat scorching and depressing Yin. The right side shows both Yang and Yin depleted, but in relation to Yin, Yang preponderates, and the patient will experience Heat signs from deficiency.

The first line of treatment to consider for Yin Deficient Heat is an especially important formula, Zhi Bai Di Huang Tang. Mayway distributes this formula using bulk herbs in its Dispensary, in its Plum Flower® Teapills or Extract Powder, in Min Shan brand, or in Bamboo Pharmacy® brand. 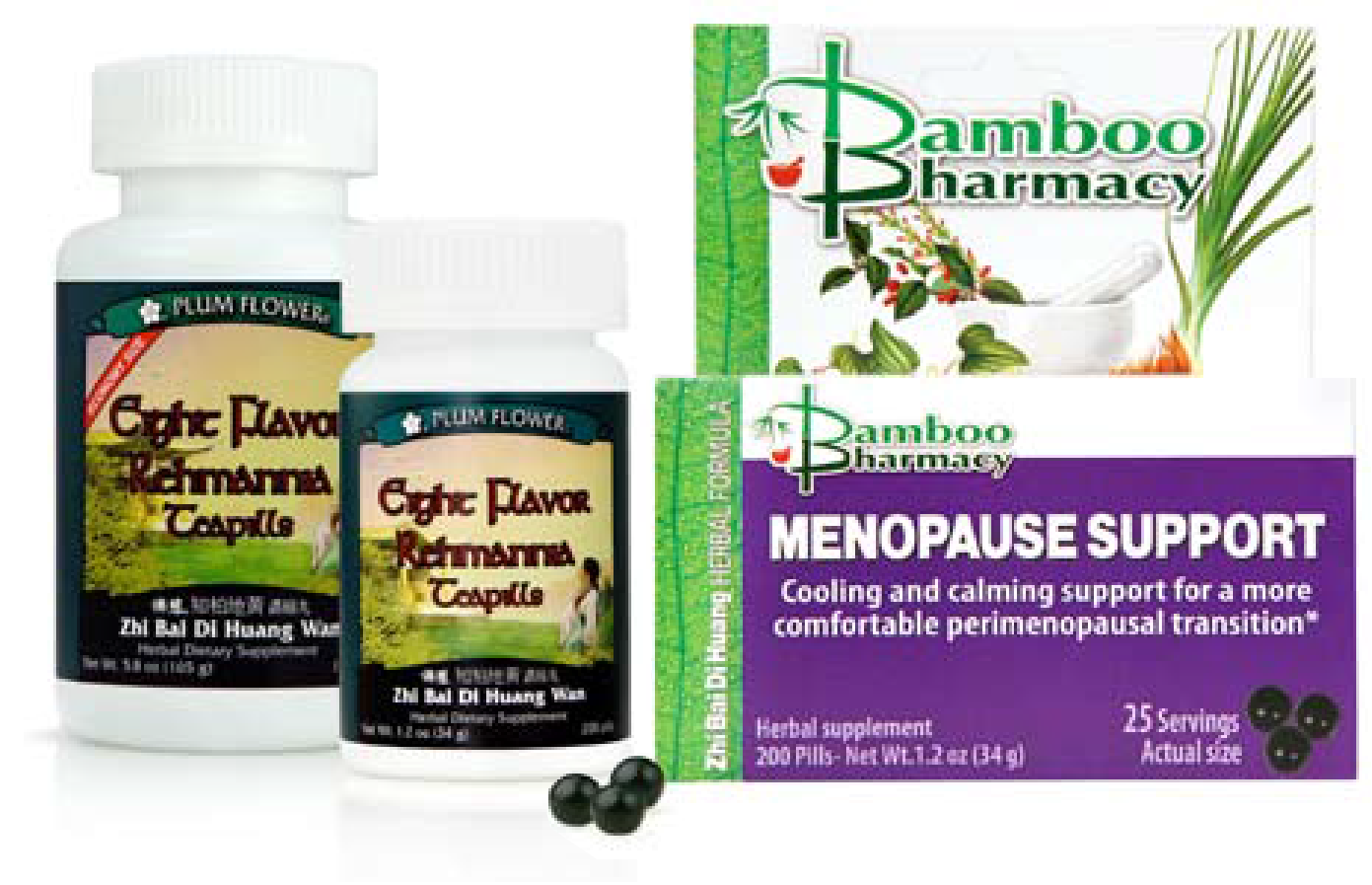 Zhi Bai Di Huang Tang nourishes Liver and Kidney Yin, subdues and clears Yin Deficiency Heat, and is well suited to alleviate hot flashes, with the appropriate presentation. The formula dates from 1742 and is a modification of a 500-year older formula, Liu Wei Di Huang Tang, by adding two bitter cold herbs to the classic Yin tonic formula. The keynote signs indicative for this formula, besides hot flashes, are a malar flush, a tongue that may be dry and reddish with a very thin coat or possibly geographic. Typically, the pulse is thin (thready) and slightly rapid.

Liu Wei Di Huang Tang is a combination of three herbs that strongly tonify the Yin and three herbs that are intended to balance the cloying effect of Yin tonics. Shu di huang is the chief herb, which is present at nearly twice the amount of the others in the formula. Shu di strongly enriches the Kidney Yin and Jing/Essence. Shan zhu yu is one of the deputies and its function is to tonify the Liver Yin and to astringe the Jing to prevent further loss and leakage. The other deputy is Shan yao which by tonifying the Spleen, augments the post-natal essence and stabilizes the Jing, improving its function.

The second trio assist the action of the formula by draining or subduing the potential accumulation of cloying and congesting Dampness from the primary herbs. Ze xie opens the fluid pathways and clears Fire from Kidney deficiency. Mu dan pi clears and drains Liver Fire and counterbalances the warmth of Shan zhu yu. Fu ling is used to leach out Dampness from the Spleen, and thus support the action of Shan yao to help prevent this rich formula from impairing the digestive function.

For a woman who is experiencing menopausal associated symptoms that present as Yin deficient, this is the first treatment to try. Oftentimes, the typical Western biomedical treatment of hormone replacement therapy (usually estrogen or a combination with synthetic progestin) may be unnecessary. Additional benefits of Zhi Bai Di Huang Tang can include improvement of other associated Yin deficient symptoms including restlessness, irritability, insomnia, dry mouth, thirst, chronic throat pain due to deficiency heat, tinnitus, weakness and pain in the low back or knees, and urinary difficulties such as nocturnal urination or incontinence.