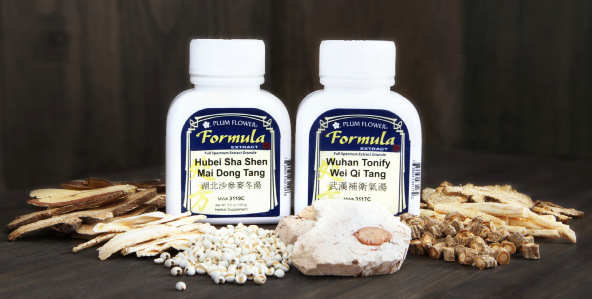 Mayway Herbs is pleased to announce two extract granule products that are based upon recent clinical assessment and research from China. Although templates of these formulas are currently available in our dispensary service, we have manufactured these new products for your prescriptive convenience. Because these formulas are extracted in an enclosed, low temperature vacuum system that preserves essential oils, they are much more powerful than a decoction made at home.

The first is from Wuhan Union Hospital, which we have named "Wuhan Tonify Wei Qi Tang" (Wuhan Bu Wei Qi Tang). This formula is comprised of 13 herbs which is designed as a prophylaxis formula for the preservation of health.

Primarily, this formula is a multi-faceted, augmented Jade Windscreen Formula, Yu Ping Feng San (玉屏風散)which is comprised of Huang qi, Bai zhu, and Fang feng. This formula has been used for over 500 years to strengthen the Spleen, Lung, and Wei Qi, Stabilize the Exterior, and Dispel Wind. 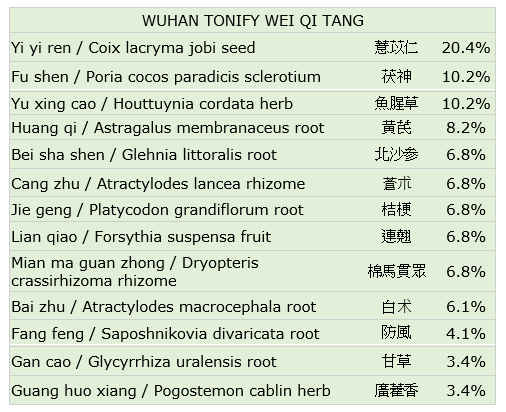 The other herbs fulfill various prophylactic roles. Since Dampness can be a critical predisposing factor for many illnesses (see the article “Damp as a Vector of Pathogenesis”) several herbs serve as deputies to Resolve Damp while tonifying the Spleen. These are Yi yi ren, Cang zhu, and Fu shen. Interestingly, Fu shen is used instead of the more common Fu ling, presumably due to its spirit-calming effect. Guang huo xiang assists to aromatically transform Dampness while releasing the Exterior.

Another example of prophylaxis is the use of Lian qiao, Mian ma guan zhong, and Yu xing cao, which work together to dispel Toxic Heat before it can be established in the Wei Qi level. Jie geng serves to guide the formula to the Lung, while helping to inhibit the development of cough. Since some of the herbs can be somewhat drying, Bei sha shen is added to protect the Lung Yin. Finally, Gan cao harmonizes the formula, reduces toxicity, and helps tonify the Spleen.

This extract granule formula should be prescribed for one to three months. The typical dosage is 9 g per day. For best results, divide into two or three doses, one at least 45 minutes after breakfast and another about an hour before bedtime. Individuals exhibiting Yin Deficiency Heat are advised to take this formula simultaneously with a Yin tonic. Since the Bai zhu is roasted with wheat bran, those with wheat/gluten allergy are cautioned.

The second novel formula is from Hubei Provincial Hospital, which we have named "Hubei Sha Shen Mai Dong Tang". This restorative formula is comprised of 12 herbs and is designed to Tonify Qi, Nourish Yin, Tonify the Lung and Open the Channels and Collaterals in order to assist someone regain their strength while in their recovery process.

Restoring health (Huīfù Jiànkāng 恢復健康) after surviving a challenging illness requires not only the replacement of the vital qi and substances expended, but lingering etiological factors must also be expelled. When Toxic Heat and Damp combine, Qi and Yin can become depleted while fighting the evil Qi. A common result is Phlegm, which can cause a lingering failure of the Lung Qi to descend and whole-body discomfort due to a blockage of the Channels and Collaterals. This formula is designed to address all of these issues. 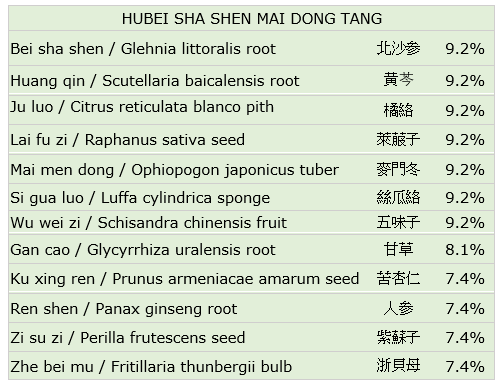 The principal eponymous herbs, Bei sha shen and Mai men dong, nourish Yin which may have become scorched after experiencing elevated body temperatures. In addition, Bei sha shen has the added characteristic of clearing Lung Heat. This function is assisted by Huang qin, which also serves to dry any lingering Damp. Ren shen is the major deputy since it tonifies the primal Qi of the whole body, especially the Spleen, Stomach, and Lung Qi while nourishing the Yin. Completing the list of restorative herbs is Wu wei zi and Ku xing ren. Wu wei zi contains the leakage of and descends the Lung Qi and strengthens the Kidney to receive the Lung Qi. Ku xing ren also assists to descend the Lung Qi and moistens the Lung.

Many remaining symptoms of the “long-haulers”, after they would have expected to have recovered, are due to the presence of lingering Phlegm in the Lung and the Channels and Collaterals. Lai fu zi, assisted by Zi su zi and Zhe bei mu, transforms Phlegm in the Lung and Zhe bei mu also clears Lung Heat. The herb couple Si gua luo and the less commonly used Ju luo (Tangerine Pith) work together to Unblock the Channels and Collaterals by transforming the lingering Phlegm that is lodged there. This allows the Qi to freely flow throughout the body to promote health and normal homeostasis.

Administration of this elegant recovery formula can begin as soon as a patient begins to feel better, but still not quite right. Expect one to three months of this herbal therapy to expel all of the lingering factors, before switching to an appropriate constitutional approach for maintaining health. The standard dosage is 3 grams, three times per day, which should be taken separately from meals. Larger doses may be indicated, and adjustment of this dose should be made according to clinical principles, as tolerated. See: “Determining the Right Dosage for Your Patient” and “Are You Under-Prescribing Extract Powders?”

Whether building health to make someone as strong as possible or the rebuilding of their health after dealing with an assault of evil Qi, these two new, ready-made, extract granule formulas are essential during these challenging times. They are also available as base formulas in our Dispensary for those who would like to modify them with additional ingredients.